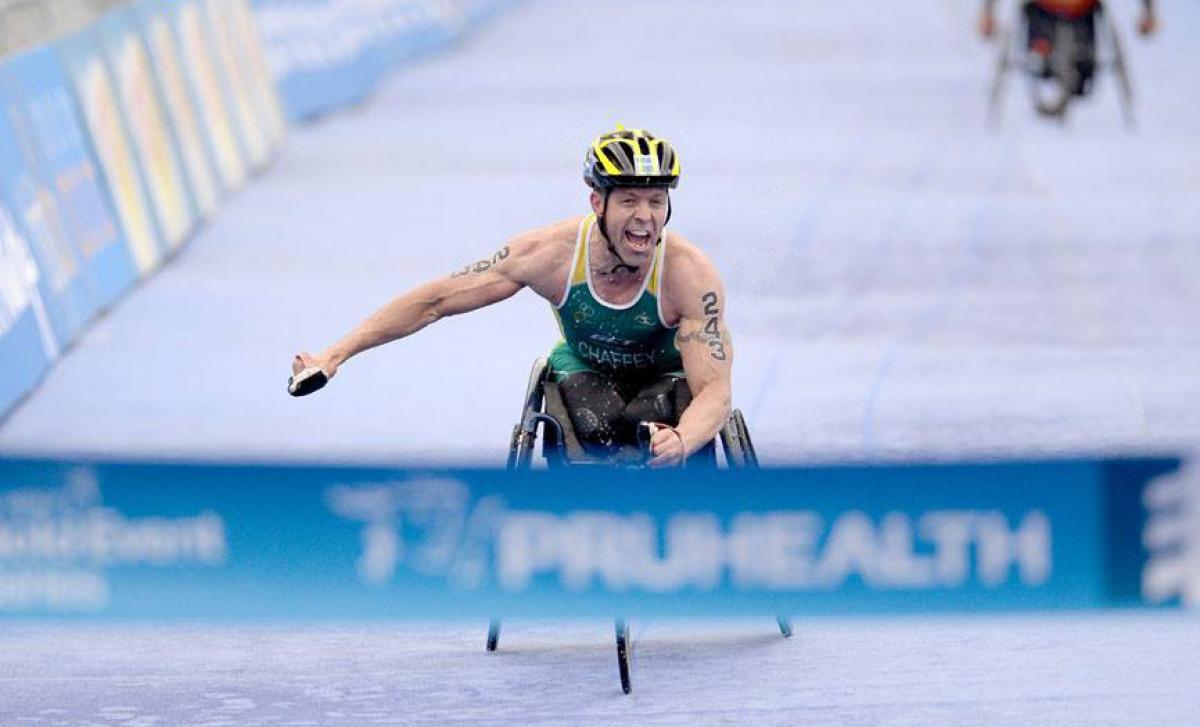 “I've had a love-hate relationship with water all my life and overcoming a fear of the water has been a far greater mental battle than the actual physical disability of swimming with one arm.”

The 2014 ITU World Para-Triathlon Series will begin with the first event of the year on Sunday (16 February) in Elwood, Australia, and leading the pack of contenders is the host nation’s Bill Chaffey.

Chaffey won his fourth world para-triathlon title at the 2013 World Triathlon Grand Final in London after a come-from-behind victory against the Netherlands’ Jetze Plat in the final 300m.

Earlier this year, Chaffey took part in the 2014 Penrith OTU Para-Triathlon Oceania Championships, where he came first in male TRI-1 class. Chaffey was able to complete the course in under an hour. He proved strong in his bike portion and finished the race more than 10 minutes ahead of the next competitor, teammate Erik Horrie.

The race in Elwood will be a new experience for Chaffey, who has never raced there. Chaffey was hit with an illness to start February but said he would be ready.

“I am aware it is an ocean swim which I like, and I'm told the run is likely to be held over a multi-lap course with a lot of turns, so this will be interesting,” said Chaffey.

The Grand Final also taught the veteran another lesson – not to focus solely on one competitor. In London, Chaffey had not even known about Plat before the race.

“I wasn't aware of Jetze (Plat) before that race, and he is the one who gave me the most trouble,” said Chaffey. “I now make sure I remain conscious of all my competition.”

On the women’s side, Australian Claire Mclean hopes to get her first win at a world event for this season. Mclean, who also took part in the OTU Oceania Championships, came fifth at the 2013 World Triathlon Grand Final in the female TRI-4 category.

Mclean said she is excited about the upcoming race which will be the first international para-triathlon event in Australia.

“I hope it is the first of many to come, and I hope that over time international athletes realise what a fantastic and unique environment Australia has to offer as a racing venue,” said Mclean.

Swimming, said Mclean, is an area she hopes to improve not just for the race but the season as well.

“I am constantly trying to improve all areas of my triathlon, but in particular my swimming has been an area that I have worked hard at for what seems like very minimal gain,” said Mclean.

“I've had a love-hate relationship with water all my life and overcoming a fear of the water has been a far greater mental battle than the actual physical disability of swimming with one arm.”

Veteran Lindy Hou will also compete at Elwood in the women’s TRI-6b class. The Australian said she was excited for the occasion and the chance to participate alongside other triathlon athletes.

“I think Elwood is a great opportunity for para-triathletes in Australia and surrounding region to be able to compete among the able body triathletes on the same day and the same course,” said Hou.

Along with the deep Australian content, Elwood will see at least one international participant when Alessandro Colombo, from Italy, competes in the men’s TRI-5 class.