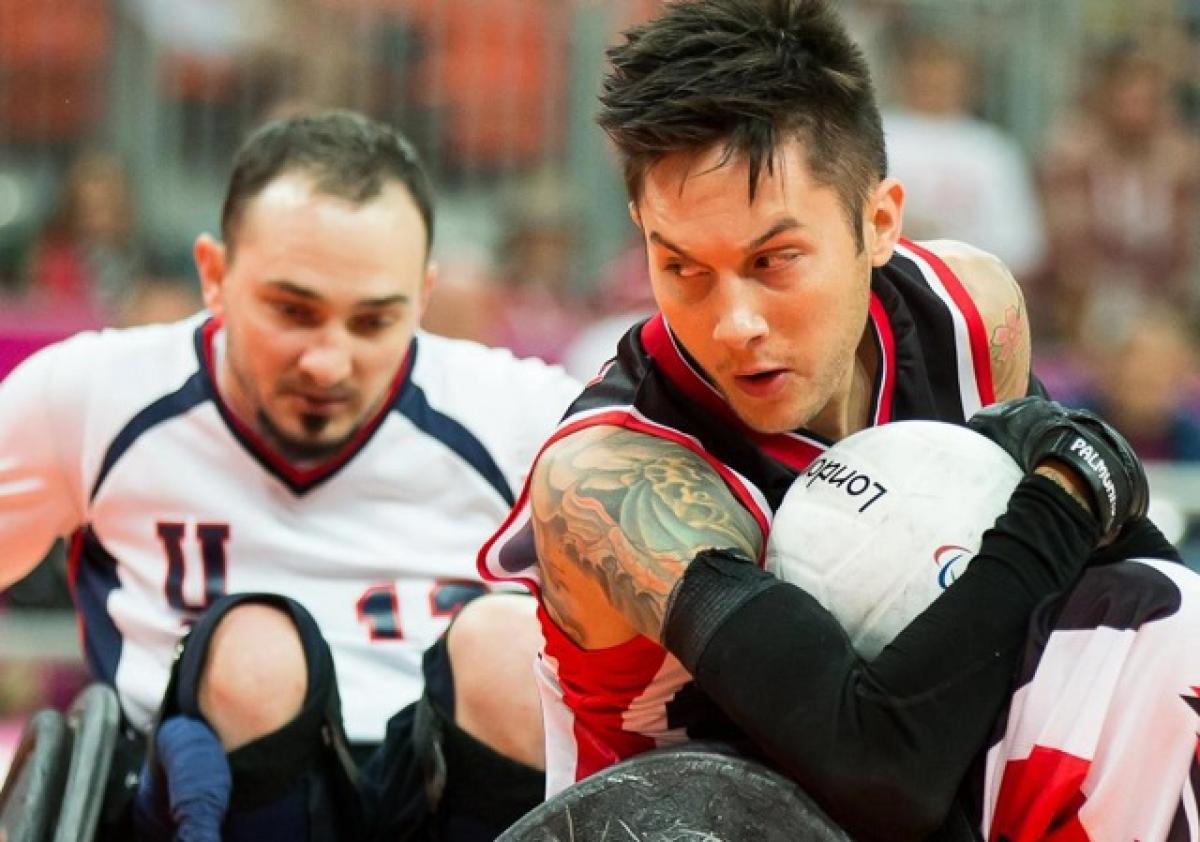 By Nathaniel Holland and IPC

Canada are now the world’s number one wheelchair rugby side after they claimed overall victory at the BT World Wheelchair Rugby Challenge in London, Great Britain, on Friday (16 October).

Just like they had done in Toronto in August, Canada claimed the title in the Copper Box Arena with a hard fought 54-50 win over rivals USA.

The two sides had kick started the tournament against each other on Monday (12 October), with Canada winning that game by a single point in the pool stages.

Zak Madell had stolen the show for Canada this week in their first four games, but it was his team mate Michael Whitehead who was pushing Canada in the opening moments of the final.

The 3.0 player scored a quick hat-trick in the first two minutes as they took an early lead against USA.

Although Whitehead was scoring the points, Madell was influential in play and he ended up rolling over for five of his side’s first 10 tries.

Madell was pumped for the game and that showed when he sent Eagles star Joe Delagrave flying with a huge smash.

USA were going about their business effectively and did not let the threat of Madell get on top of them.

Some superb clock management from the USA’s James Gumbert’s in the closing seconds of the first period gave them a one point advantage into the first quarter as Josh Wheeler crossed the line with two seconds left on the clock.

The one point deficit was the motivation Canada needed and they pressured USA and managed to turnover possession as they quickly drew level and went two points ahead after the second period.

The game was balanced on a knife-edge but Canada retained their two-point lead heading into the final quarter as USA battled to keep them in the game.

Two points was a manageable score for USA to try and pull back but Canada showed great qualities. Just like on Monday, the duel between Madell and the USA’s Chuck Aoki was a stand-out feature with both players rolling over the 20 try mark each in the final period.

Canada were boosted by the performance of captain and leader Trevor Hirschfield as he did not put a pass wrong all game to help his team claim victory.

In the final moments Canada stretched the lead by four to end the game with a 54-50 victory to claim gold.

Despite a shock semi-final loss to the USA on Thursday (15 October), Australia did not leave London empty handed. On Friday, the world and Paralympic champions beat Japan 60-55 for a second time in five days to claim the bronze medal at the BT World Wheelchair Rugby Challenge.

Having already narrowly beaten the world number four team on Tuesday 65-62, Australia’s Brad Dubberley knew he would have to set his side up for another challenging encounter with a medal at stake.

The tournament has shown an array of talent throughout the week and the opening exchanges were heavily influenced by two of the stars of the week, Ryley Batt and Daisuke Ikezaki.

Both teams exchanged early tries, as it was a game of patience and tactics to see who could overturn possession and start to build a lead.

With the scores all level in the early minutes, Batt’s partner in crime Chris Bond made a huge difference from the bench, rolling over to score four tries as Australia took a three point lead into the first interval.

Batt was given a breather on the touchline heading into the second period and Bond, with the help of Matt Lewis, were continuing to cause Japan problems.

Lewis managed to score a hat-trick of tries in the second period as Japan let the lead slip to five points at half time with the score at 33-28.

Japan knew that they had to start the second half strongly and they did just that with Shinichi Shimakawa scored a quick treble as they pulled the score back to within three points.

Australia replied instantly and restored a big lead with Batt determined not to let his nation slip out of the top three in the world.

The fourth quarter was routine for Australia as Japan struggled to overturn play as they desperately tried to get something from the game.

Australia managed the clock in the closing stages and confirmed their podium finish with a 60-55 victory.