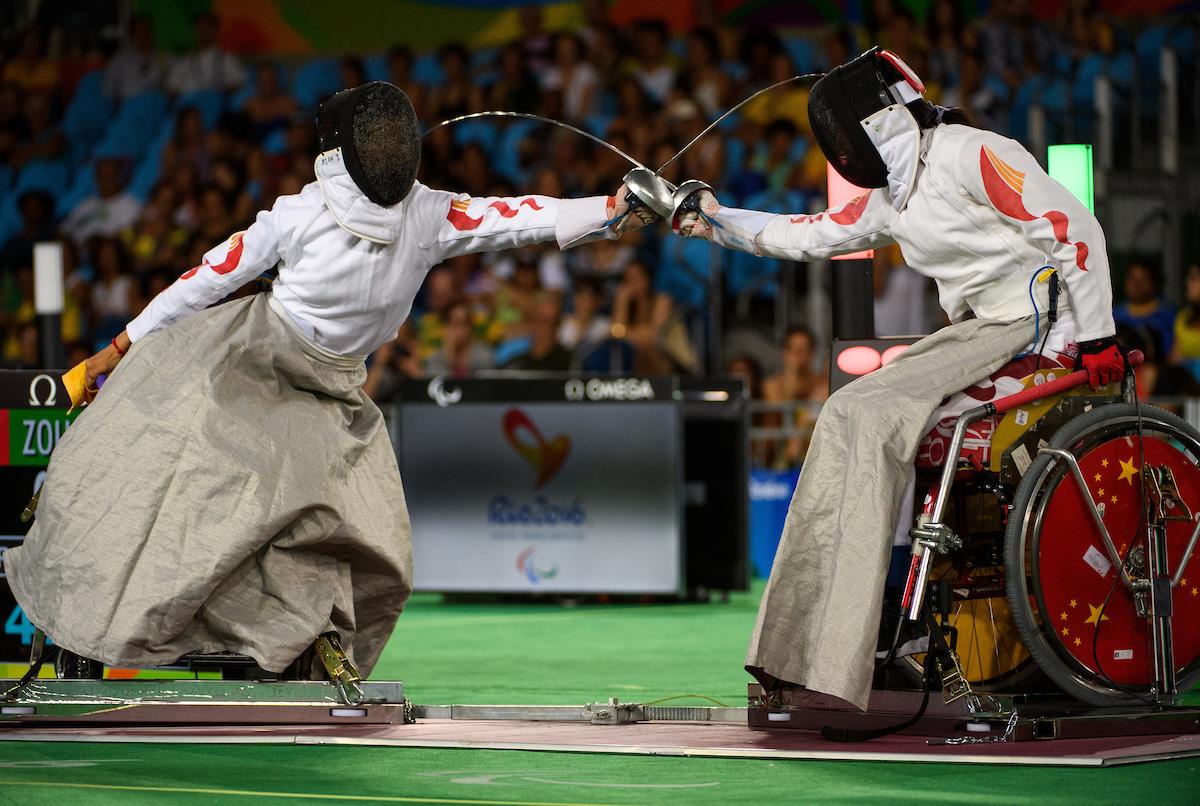 ⒸThomas Lovelock for OIS/IOC
By Mike Stuart | For the IPC

It was another golden day for China’s wheelchair fencers as they topped the podium in both the men’s and women’s team foil events in Carioca Arena 3.

The wins take China’s fencing medal tally for Rio 2016 up to 17, nine of them gold. Their closest rivals were Ukraine with four medals.

In the men’s foil team event China went into the match as favourites, and the billing proved justified.

Gang Sun was the hero of the final, dropping just three points in his three bouts as China sealed gold with a 45-27 win. According to Sun, the key to the Chinese team’s success is their team spirit.

“The Chinese team prepared a lot before these Games.” Sun said. “We practiced so hard and it’s all because of teamwork.

“We support each other and we are very together. That’s how we reached this result; this great success during the Games.”

In the equivalent women’s contest it was a similar story as a much-fancied China side fenced their way to the top of the podium, beating Hungary 45-28 in the final.

Star of the China team was the current foil category A world champion Chuncui Zhang, who made up for the disappointment of not medalling in the individual foil event at Rio 2016 by leading her team to the top of the podium.

For Hungary’s beaten finalist Zsuzsanna Krajnyak the pursuit of gold continues. Krajnyak has now competed at five Paralympic Games and has medalled each time, but never gold. She has said she may return to change that at Tokyo 2020.

“We’ll see if I’ll compete in Tokyo.” Krajnyak said. “It's going to be my 20th anniversary at the Paralympic Games. Maybe.”

The foil team silver takes Krajnyak’s total tally of Paralympic medals to 11, equalling the record for the most of any female fencer set just a day previously by Hong Kong’s Yee Chui Yu. Yu narrowly missed out on another medal as Italy’s category B foil gold medallist Bebe Vio sealed a dramatic 45-44 victory over Hong Kong in the bronze medal match.

“It’s just fantastic winning this bronze with my team,” Vio said afterwards. “I do really care more about this bronze than the gold from the individual event. It’s amazing because we are all happy now, all as a team.

“Physically we might not be that strong, but mentally we are beasts. We can smash anyone. We love each other and we want to win all together.”