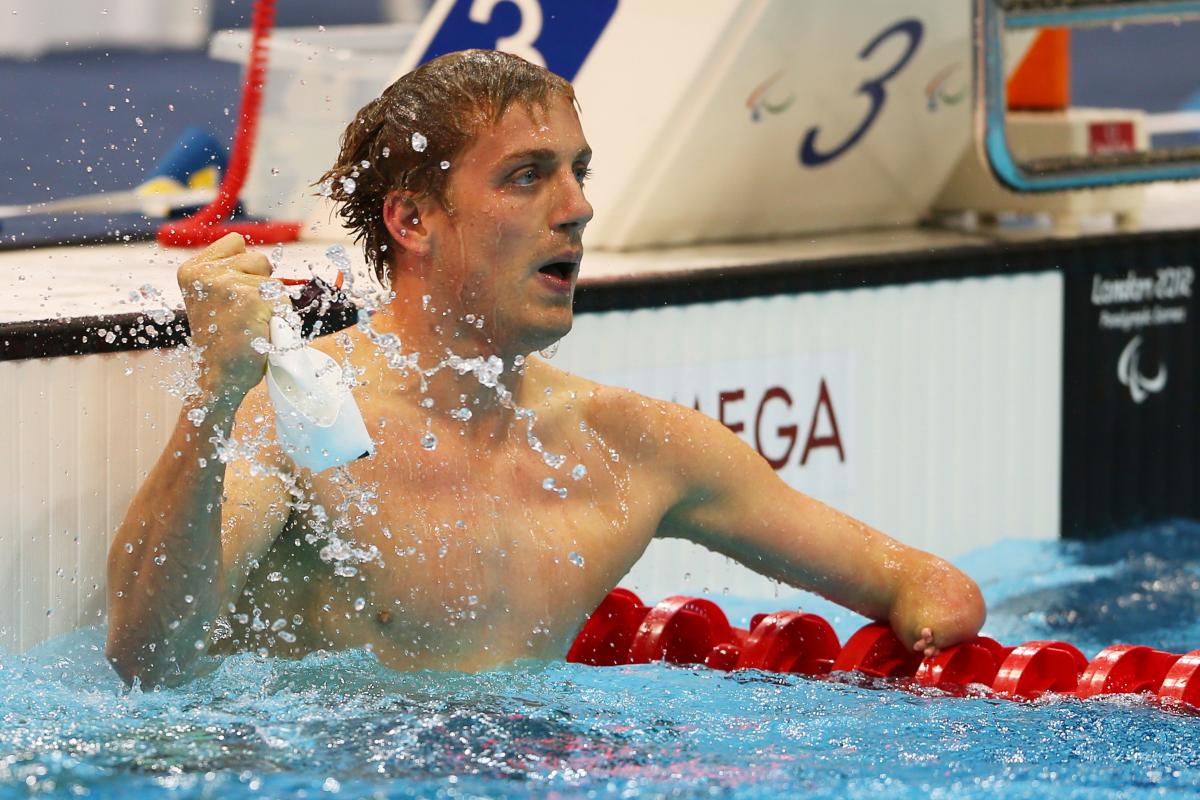 “It's a healthy Games. We all have the same goal. We all want to win, but it's really great and awesome when a competitor comes up and hugs you at the end of a race.”

Australia’s Matthew Cowdrey became his country’s most successful Paralympian of all time at the age of just 23 on the seventh night of action in the Aquatic Centre.

Collecting his 19th medal, and 11th gold, after winning the 50m freestyle S8 in world record time, Cowdrey eclipsed Tim Sullivan's previous record of 10 golds. This is Cowdrey’s third Paralympic Games and seeing as he’ll be 27 by the time Rio comes around in 2016, he might just add to his medal tally.

Jessica Long was another swimmer who continued to exert her dominance over her classification. Long won her fourth gold of the games in the 200m individual medley S8. Setting a Paralympic record, Long won her 15th Paralympic medal at the age of just 20.

Long paid tribute to Olesya Vladykina, who finished second. She said: “I didn't think she would push me that hard. But as soon as I won the race she came up and said, 'You're the best' and that meant a lot.

“It's a healthy Games. We all have the same goal. We all want to win, but it's really great and awesome when a competitor comes up and hugs you at the end of a race.”

An even younger swimming sensation is China’s 15-year-old Yang Yang who won the men’s 50m backstroke S2 with a world record to claim his third gold medal of the games. Yang took up swimming at the behest of his Dad so he could exercise more, and with a trio of gold medals around his neck, it seems to have been a good decision.

Ukrainian Yevheniy Bohodayko won his second gold and fourth medal of the games as he took charge of the 100m breaststroke SB6 race from the start and finished over five seconds ahead of Torben Schmidte in second place.

Great Britain didn’t have to wait long for their first medal of the seventh day in the Aquatic Centre as Oliver Hynd won the first race of the evening session. The 17-year-old picked up gold in the 200m individual medley SM8, meaning he has a full set of medals at London having already won silver and bronze.

Oliver, up against his brother Sam who finished fourth, saw off the challenge of Jiachao Wang of China and Maurice Deelen of the Netherlands.

In another domestic rivalry for the GB crowd, Charlotte Henshaw and Liz Johnson went head-to-head in the 100m breaststroke SB6. Johnson, who won the event in Beijing and silver in Athens, finished third as Henshaw was touched out into second by 14-year-old Ukrainian Viktoriia Savtsova who also broke the Briton’s Paralympic record.

Meanwhile, China’s Ping Lin beat Great Britain’s Louise Watkin to gold in the 50m freestyle S9 final. Lin won her first gold of the games in a Paralympic record time as Elodie Lorandi added a gold medal to her two bronze in the 400m freestyle S10. Picking up her country’s second gold medal in the pool, the 23-year-old finished ahead of Canada’s Aurelie Rivard and Susan Beth Scott.

The start of the session had seen a dearth of world records, but Russian Aleksandr Nevolin-Svetov cut two hundredths of a second off the previous best time in the seventh race of the night, the men’s 200m backstroke S12.

The next race saw Oxana Savchenko beat an eight-year-old record in the 100m backstroke S12 as she finished ahead of Natalie Pronina and Great Britain’s Hannah Russell.

Also in action was Germany’s Kirsten Bruhn in the 100m breaststroke SB5. The 42-year-old Bruhn, who plans to retire after these games, showed her experience and expertise as she picked up her first gold in London, beating LingLing Song of China into second.