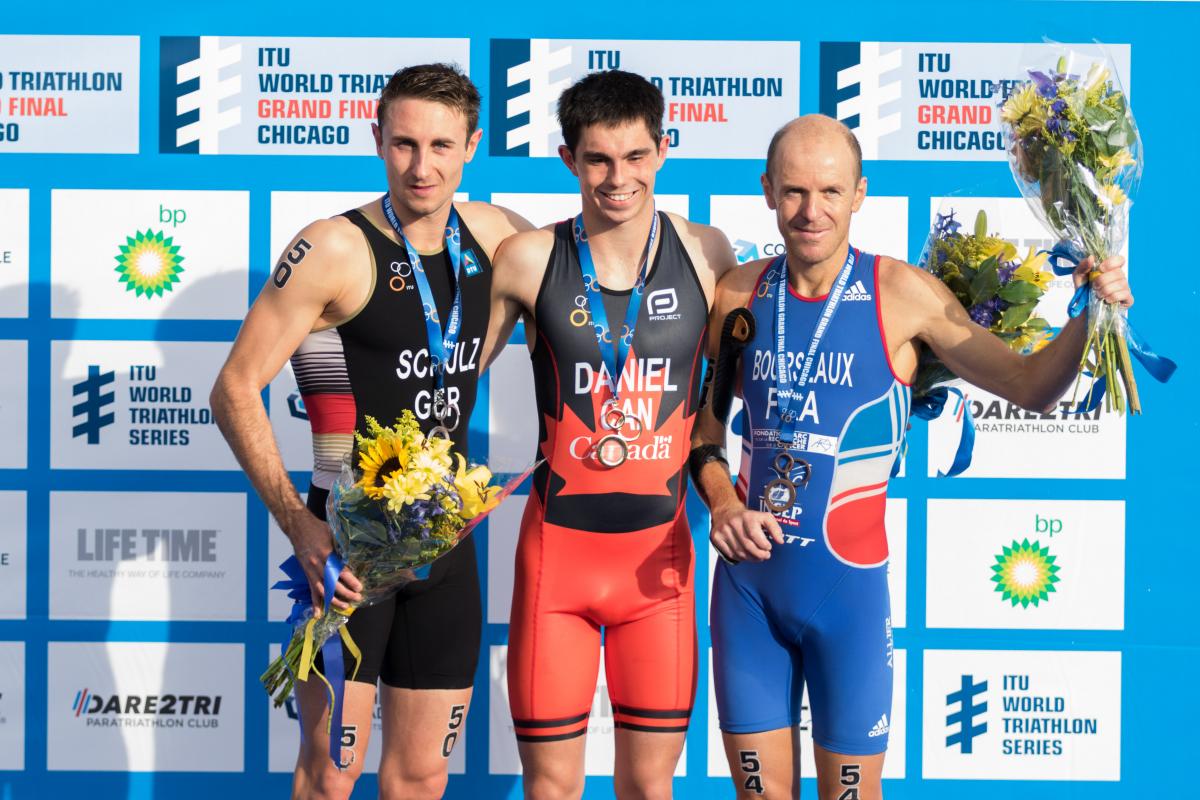 “That was one of the hardest races I’ve ever done.”

Daniel, 18, completed the course in 59:27, 30 seconds quicker than Schulz, who had not lost a para-triathlon race in nearly two years and entered as the heavy favourite in the men’s PT4 category.

“That was one of the hardest races I’ve ever done,” said Daniel after pumping his fist in celebration down the finishing chute. “It was a big battle today. Martin and I were having a good battle the whole way. I am so happy to have come out on top. I’ve wanted this ever since I was a kid so I am pretty happy right now.”

The German had a 28-second lead on Daniel after the 750m swim in Lake Michigan. After a malfunction on the second lap of the bike, Daniel took the lead. Schulz continued to battle back, and the two athletes entered transition two after the 20km bike shoulder-to-shoulder. Schulz bolted onto the 5km run course first. But after the opening of three laps, the Canadian led the way in the deepest para-triathlon field. Daniel never looked back, and celebrated after rounding Buckingham Fountain for the final time with 100m to go.

“I knew I had a good year, but I really wanted to win,” Daniel said. “I didn’t have any pressure on me going into [Friday]. … I just wanted to give it everything I could and I am really happy to have the gold.”

France’s Yannick Bourseaux clocked-in at 1:00:37 for the bronze.

With the victory, Daniel secured a spot for his country at Rio 2016, where para-triathlon will makes its Paralympic debut.

“The goal was to win [Friday] to have Rio qualifications out of the way,” Daniel said. “Now I can look forward to that and focus on junior racing next year, and not have to worry about Rio.”

In the women’s field, Australian Katie Kelly (1:08.51) along with guide Michellie Jones, claimed their first world title after a come-from-behind victory. The swim and bike legs saw a close battle between British teammates Alison Patrick and Melissa Reid. It was after the second transition when Kelly gained on the Brits and was able to brush by them to take the front position and the eventual win. Patrick followed 30 seconds later to take the silver medal in 1:09.20. Spain’s Susana Rodriguez (1:11.29) stunned by pulling through on the last lap of the run to overtake Reid and earn the bronze medal.

On the men’s side, the USA’s Aaron Scheidies (1:03.16) took the gold medal for the second consecutive time after maintaining the lead for the entire race. The silver medal went to Ukraine’s Vasyl Zakreyskyi (1:04.50), and Poland’s Lukasz Wietecki (1:05.10) took third.

While the men’s side saw a tight race between Daniel and Schulz, Great Britain’s Lauren Steadman (1:08.19) crushed the women’s field by holding onto a lead that she earned early. As she exited the waters, Steadman was up by over a minute. She earned the gold medal and a consecutive world title without any threat. Second place went to the USA’s Grace Norman (1:09.48), who overtook Australia’s Kate Doughty (1:11.18) in the run to get the silver medal; Doughty took bronze.

Austria’s Oliver Dreier (1:08.15) took home the world title in the men’s race. Dreier trailed in the first two disciplines of the race, but was able to take the lead after a noteworthy performance on the run. His gold medal signalled a comeback after coming in second place in the 2014 World Championships. Silver was awarded to the lead swimmer from Spain Alejandro Sanchez Palomero (1:09.15); bronze went to Australia’s Justin Godfrey (1:09.54).

In the women’s race, Australia claimed yet another world title after Sally Pilbeam (1:20.22) finished strong for the gold medal. Joining her on the podium was compatriot Kerryn Harvey (1:24.04) and the Netherlands’ Saskia Van Den Ouden (1:24.15).

USA swept the podium yet again in the women’s sport class. Allysa Seely (1:25.03) grabbed her first world title after outrunning compatriots Hailey Danisewicz (1:25.45) and Melissa Stockwell (1:26.07), who took silver and bronze, respectively. At first, the race was controlled by Finland’s Liisa Lilja, who came out of the swim in the front and then held onto the lead for the first couple of laps on the bike. Stockwell then pushed through to overtake Lilja. The US trio also shared the podium at August’s Rio 2016 test event.

In the men’s race, Italian Michele Ferrarin (1:10) was deemed victorious after trailing in the water. The USA’s Mark Barr dominated in the swim and headed into the first transition to start out on the bike. Ferrarin was quick to get caught up however and took control and maintained the lead up until the finish line. The silver medal went to France’s Stephane Bahier (1:10.34), and Great Britain’s Ryan Taylor (1:11.11) was awarded the bronze.

Australia’s Bill Chaffey (:58.38) completed a drive for five World Championship titles when he cruised over the finish line with an ecstatic fist pump in the men’s field. Despite exiting the water at a deficit of 1:20 to the Netherlands’ Jetze Plat, Plat was hit with a flat tire in the bike portion. The USA’s Krige Schabort (:59.55), who won the men’s PT1 World Championships race last year, took silver while Plat (1:00.32) rounded out the podium with bronze.

Kendall Gretsch (1:13.29) added gold to the medal count for host country USA in the women’s race. Gretsch held onto a consistent lead throughout all three legs, dominating in the swim, bike and run. Australia’s Emily Tapp (1:19.45) picked up the silver medal, and Great Britain’s Lizzie Tench (1:20.05) took bronze.

For complete results of the Para-Triathlon World Championships, which were part of the 2015 International Triathlon Union (ITU) World Triathlon Grand Final, visit the ITU’s website. 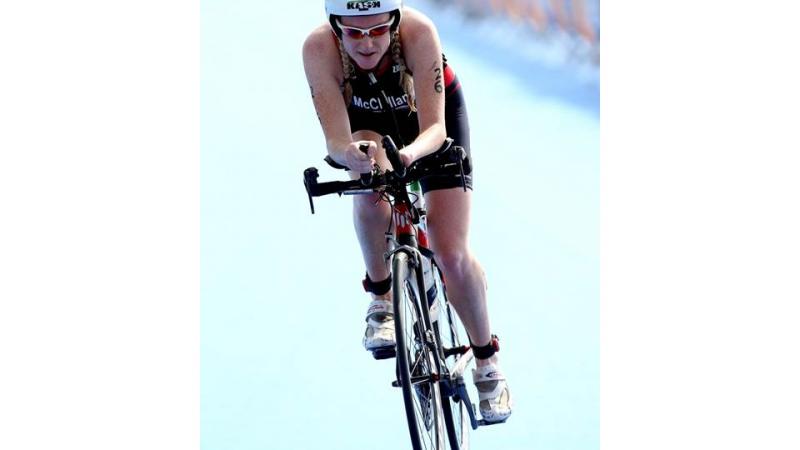