Competition is wrapped-up in two classes with a day to spare – with Britain and France going head-to-head in third on final day. 16 Sep 2016
Imagen 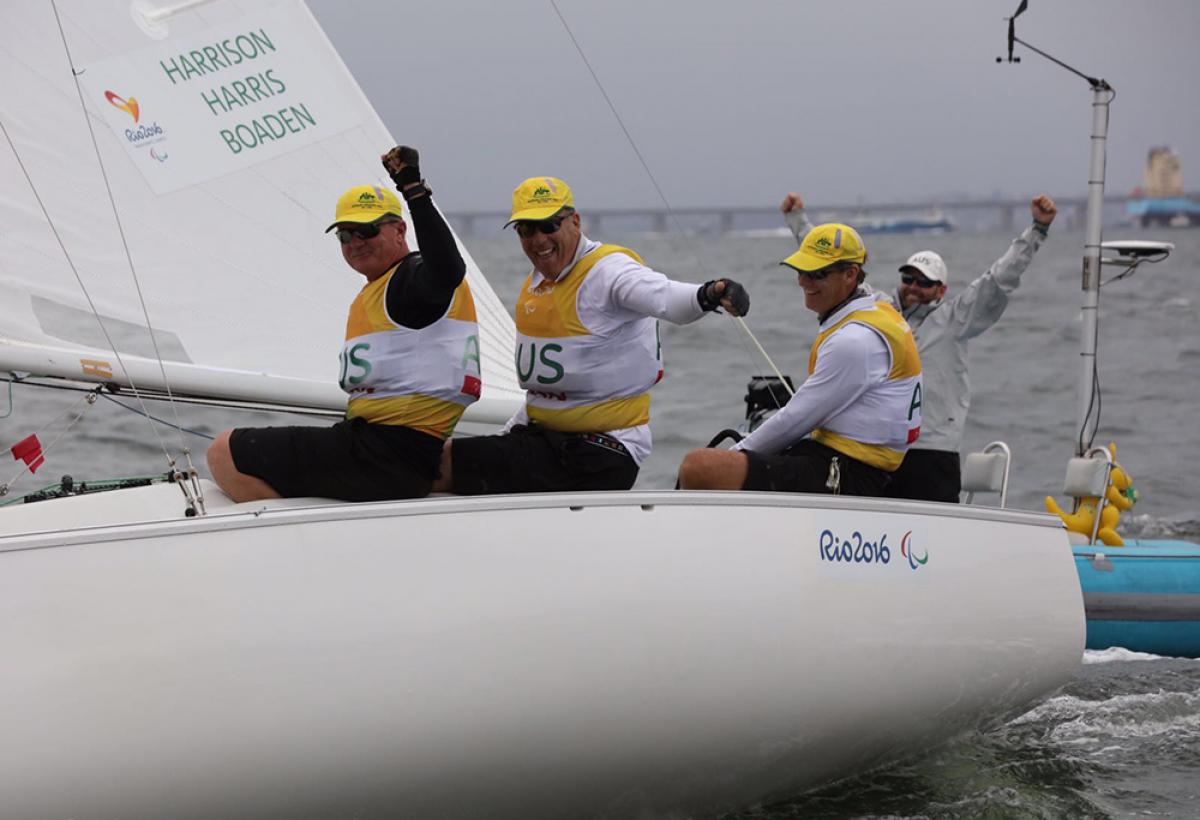 “It’s been a long time coming and it feels great to get there,” he said. “There’s a lot of emotion.”

There was Australian elation at the Marina da Gloria on Friday (16 September) as the Rio 2016 Paralympic gold medals were wrapped up in the Two Person (SKUD18) and Three Person Keelboat (Sonar) with a day to spare.

Daniel Fitzgibbon and Liesl Tesch in the SKUD18 were yet again on fire as they took two bullets from two races to seal the first ever Paralympic sailing title defence in commanding fashion.

Reflecting on their victory in the SKUD18, Fitzgibbon said: “We can adapt to everything, we can deal with craziness and deal with instability and come out on top.”

With the gold medal sewn up, the fight is on for silver and bronze. Canada’s McRoberts and Gay hold the silver medal position at present after a 2,6 day to finish on 31 points. One point back are Great Britain’s Alexandra Rickham and Niki Birrell who scored a 4,5.

In the Sonar, Colin Harrison, Russell Boaden and Jonathan Harris enter the final race with a healthy 24-point lead and a guaranteed gold medal that ensures Advance Australia Fair will ring out on Flamengo Beach twice come the medal ceremony.

The Australian win was largely helped by their nearest rivals at the start of the day, USA, faltering. Current world champions Alphonsus Doerr, Hugh Freund and Bradley Kendell were within reach of the gold at the beginning of play, but with a disappointing eighth and discarded tenth they fell too far back to challenge for the top step on the podium.

The Americans hold on to second with 43 points, but their North American neighbours and training partner, Canada, are just one point behind on 44.

Fresh off the water Harrison described the feeling as “just elation”. “It’s been a long time coming and it feels great to get there,” he said. “There’s a lot of emotion.”

It was looking like the Australian anthem could be played three times as Matt Bugg came ashore with a four point lead in the One Person Keelboat (2.4 Norlin OD). However, he was later disqualified from the final race, demoting him to third and promoting Great Britain’s Helena Lucas to the top spot.

Tesch said there would be plenty of celebrations in the Australian camp after their double-gold success – but they would be on hold until the competition has finished.

“It’s awesome to have the Sonar boys in the gold medal position as well, but we really got to hold it together for Matt Bugg to give him all our energy and support to get him over the line,” he said.

The final race day will welcome a full-house of spectators lining the sands of Flamengo Bay with racing scheduled to start at midday local time.