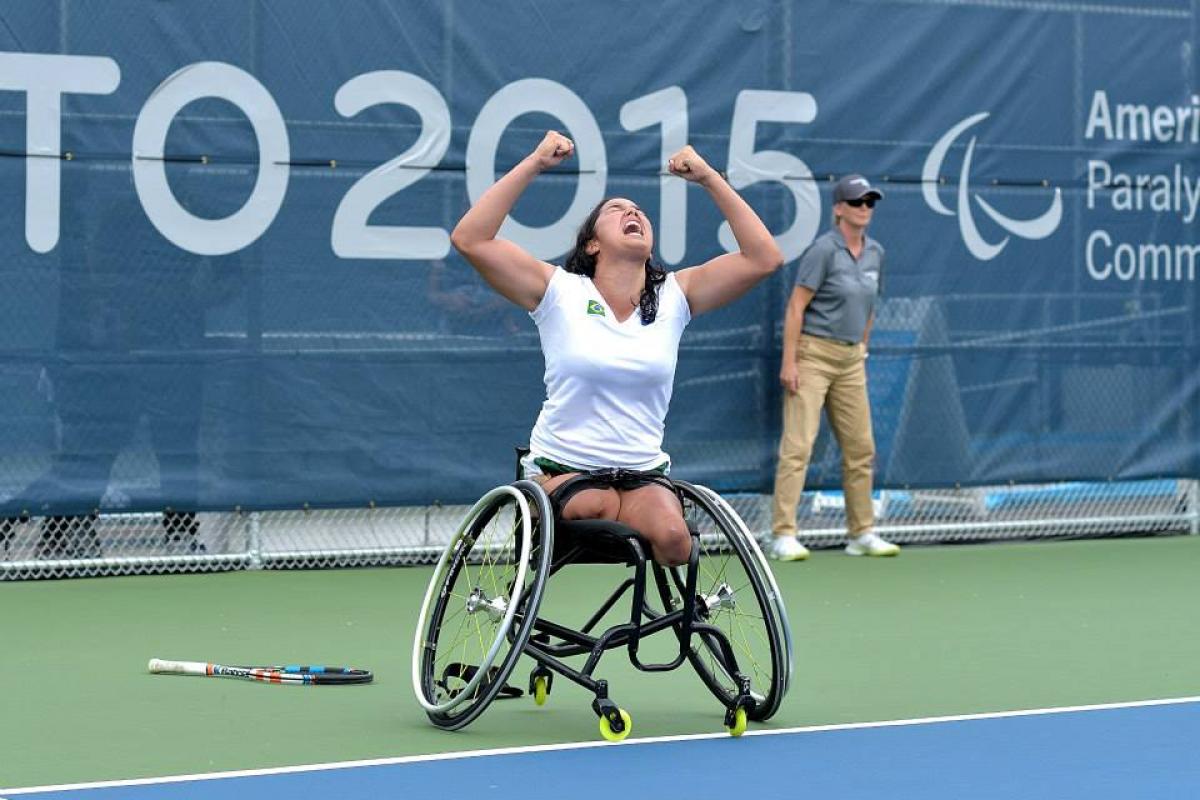 Argentina’s Gustavo Fernandez beat the USA’s Jon Rydberg 6-1, 6-2 in the men’s singles final and sealed his second gold medal at Toronto 2015, whilst Brazil’s Natalia Mayara closed out a 7-6, 6-2 win over Rydberg’s teammate Kaitlyn Verfuerth in the women’s final at the Parapan American Games, on Friday (14 August).

“Being the favourite is a responsibility. Rydberg is a dangerous rival. Fortunately, I could perform well both in the singles and in the doubles competition. I feel very happy for that,” the 21 year-old said.

It took Fernandez just 53 minutes to head to victory against Rydbgerg. He did not give his opponent the slightest chance to turn the match around.

Before the Argentinian took gold, he beat Chile’s Francisco Cayulef 6-1, 6-1 in the second round, Canada’s Joel Dembe 6-1, 6-1 in the quarter-finals and Colombia’s Eliecer Oquendo 6-1, 6-0 in the semi-finals, conceding just eight games during the whole competition.

It was his second gold medal at Toronto 2015, after winning the men’s doubles competition with partner Ezequiel Casco, on Thursday (13 August).

Bronze in the men’s singles went to Brazil’s Daniel Rodrigues after he defeated Colombia’s Eliecer Oquendo 6-0, 6-1.

“I was very focused on winning. I spent the night focused on not letting the medal go away. It is very important to go back with two medals in my second Parapan,” said Rodrigues.

Verfuerth began in super form, breaking Mayara twice early on to lead 4-0. However, Mayara raised her level, made an outstanding comeback winning multiple games in a row, levelled the score and then won the set in a tiebreak.

“I had to keep strong because I was down 4-0 and I have never played against her before. I kept thinking that it was just a matter of time to get use to her game, and that is what happened. Winning the first set was a turning point,” said Mayara who, like Fernandez, won doubles gold on Thursday.

The 21 year-old then headed to a much easier 6-2 second set win to round out the tie. “I prepared myself an entire life for a moment like that, so it is a good feeling to know that everything we do on practice is worth it. Now I realised that is true,” Mayara added.

At Guadalajara 2011, Mayara lost against the USA’s Mary Elizabeth Kaiser 6-0, 6-1 in the women’s singles quarter-finals.

“We’ve got a long history together. We are really good friends. We play doubles all the time together so it is always fun to play each other. Because of that we know each other’s strengths and weaknesses. I just stuck to my game plan, it turned out well,” said Kaiser.