With scores tied after added time it took a virtual coin toss to separate France and China in the men’s epee team final. 15 Sep 2016 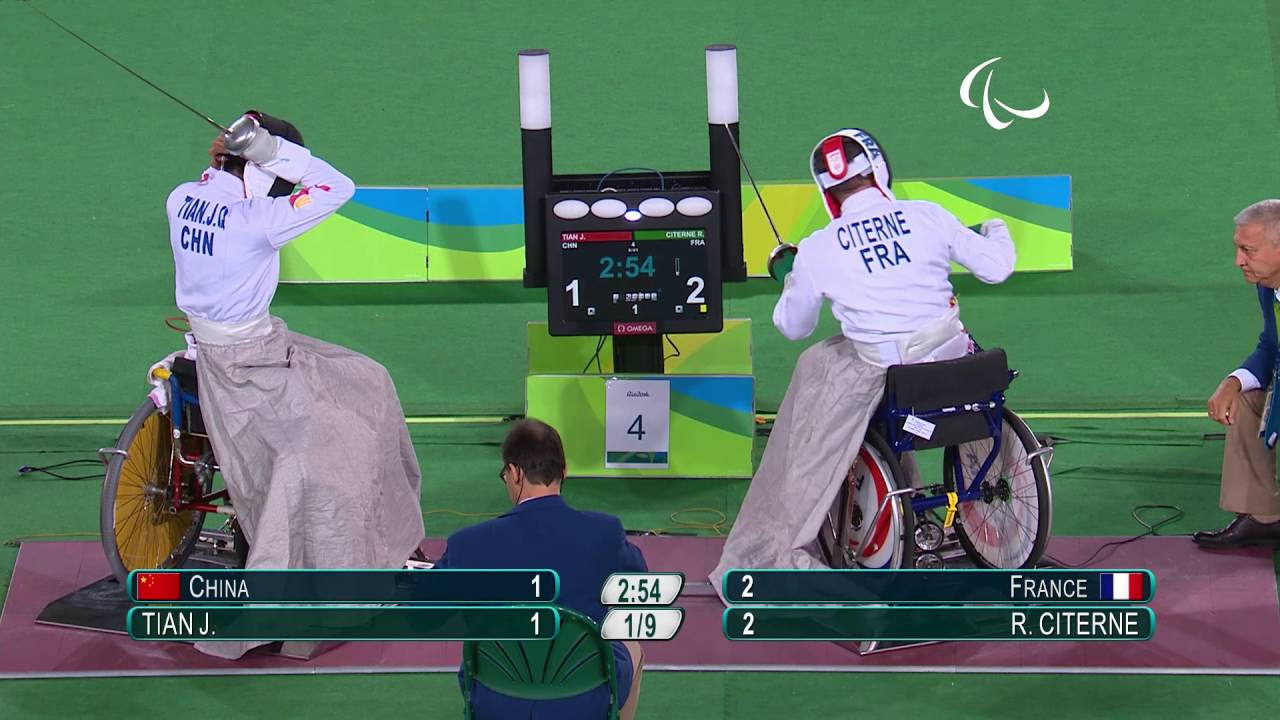 There was incredible drama in the men’s epee team event at Rio 2016 as world champions France took the Paralympic title by virtual coin toss.

With the scores tied at 41-41 when the clock ran out, the computer generated coin toss determined that France would be the winners if no point was scored within the minute of added time.

With neither France’s Romain Noble or China’s Jianquan Tian landing a decisive blow in the additional minute, the gold was awarded to France.

A key member of the title-winning French epee team was Robert Citerne, who at 55 years old is the oldest wheelchair fencer at Rio 2016¬, his eighth Paralympic Games. This latest title is his fourth Paralympic epee team competition and comes 24 years after his first, won at Barcelona 1992.

Even after competing on so many occasions, Citerne still had the enthusiasm to spur his teammates to victory.

“I love the team event, because is more powerful than the individual one which is very complicated because you're on your own,” Citerne explained.

“The team event is a different world. The public, the partners, the family are with us. When you're alone, you're all on your own, when you are with a team it's a party. And sport is a party."

"I'm a peculiar case, I reckon. My first coach in the 80s told me 'you've got a gift and this gift you're going to keep it for your whole life.' At 55 and after 37 years of career I still have that gift and I won the gold medal again.”

In the women’s team epee event China sealed their eighth wheelchair fencing gold of the Games. Individual epee category A winner Xufeng Zou was in excellent form as China took the title 45-35. For Zou, the match had a key turning point.

"In the beginning it was very tense and intense.” she said. “The score was very close. And then halfway through it got a lot easier because our advantage grew more and more and the gap got wider."

Despite defeat in the final there was still cause for celebration for Hong Kong’s Chui Yee Yu. Her appearance on the podium was her eleventh at a Paralympic Games, meaning she breaks the record for the most Paralympic medals of any female wheelchair fencer.

“We [Hong Kong] are now looking forward to the foil competition. We will get definitely another medal and I’ll set a new record!”

Tomorrow sees the final day of wheelchair fencing in Carioca Arena 3 with both men’s and women’s foil teams in action.