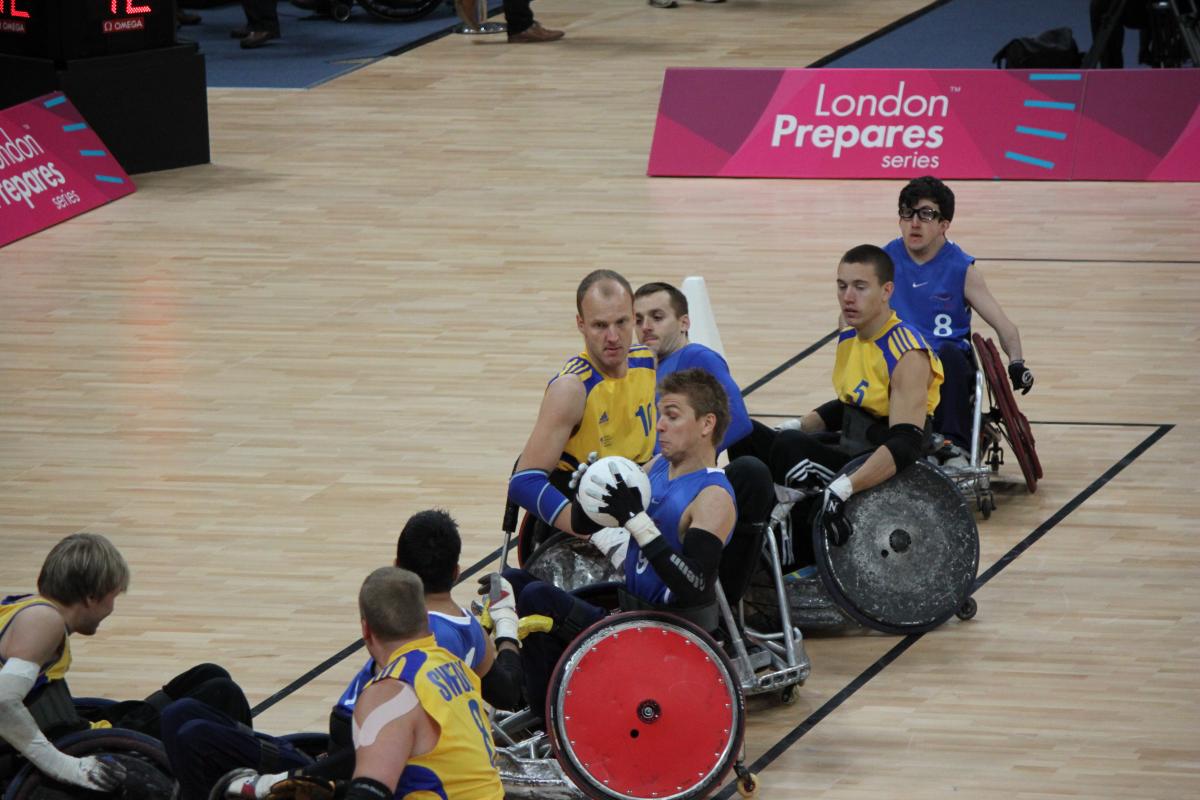 “We had a slightly shaky start. I think that was a bit of nerves. We settled down, got our composure back and showed what we've been training, what we've been doing and all the hard work came together.”

Great Britain won both games against Sweden (48-36) and Canada (63-62) on the first day of the Wheelchair Rugby test event at the Basketball Arena on the London 2012 Olympic park.

Having lost the finals to Sweden at the European Championships, the silver-medallists were determined to settle the score in their first match of the day.

Though Sweden took the lead in the first few minutes, Great Britain pulled it back to win.

Having lost the finals of the European Championships to Sweden, Morrison said it was a great feeling to beat them.

“Overall it was a great game for us,” said Morrison. “We had a slightly shaky start. I think that was a bit of nerves. We settled down, got our composure back and showed what we've been training, what we've been doing and all the hard work came together.”

Sweden won the tilt-off and led in the first half of the first period, but Great Britain quickly turned the game around, leading 11-9 after the first eight minutes. Great Britain's Aaron Phipps scored all but one of those goals.

“Aaron's got great speed and manoeuvrability, and with my passing we can really work for each other and set each other up. So it's a tough combination to stop,” said Morrison.

In the second period, Great Britain did an effective job of blocking Sweden's Tomas Hjert (2.5-pointer), who was brought on as a substitution early on. The home team dominated with Phipps again scoring 10 of his team's 15 goals to take the score to 26-19.

In the third period, Great Britain's Kylie Grimes (0.5-pointer), the only female player in the tournament, came on in defence. After Sweden substituted Andreas Collin (2.5-pointer), Jansson and Per-Johan Uhlmann (3.5-pointer) for Per-Arne Kulle (2.0-pointer), Mikael Norlin (3.0-pointer) and Hjert, Great Britain were able to shut down Sweden's offence.

“They switched with a new line-up and we were able to take advantage of that,” said Morrison. “It's just a very simple philosophy: you never take the pressure off. It's all about hitting them, turning them and putting them under as much pressure as possible, and it's difficult for a new line-up to come in and deal with that, hence why we really put it to them in that quarter,” said Morrison.

Sweden were forced to turnover three times when they failed to cross the centre line within 12 seconds. Phipps danced around the Swedish defence, often passing to team captain Steve Brown to score. Brown was the second highest scorer for the team, with 8 goals.

Phipps came off at the end of the third period, allowing Brown and Andy Barrow to clinch the win for Great Britain.

Sweden's Tobias Sandberg, who was his team's top scorer with 11 goals, playing until the final half of the fourth quarter, said Great Britain kept the pressure up throughout the game.

“I don't really know what happened. GB were the better team, in better shape. We struggled in the defence and offence,” Sandberg said.

The second match of the day saw Great Britain and Canada battle it out to the end, with the game going into extra time.

“That was intense,” said Great Britain's top scorer Aaron Phipps. “Canada are a fantastic team and that was a really really good result. We managed to get a few up on them in the first half and they just pulled it back.”

“Canada are a really well-drilled team. They've been playing together for a very long time and they've got a lot of chemistry,” said Phipps.