Giovanni Achenza aims to prove age is no barrier 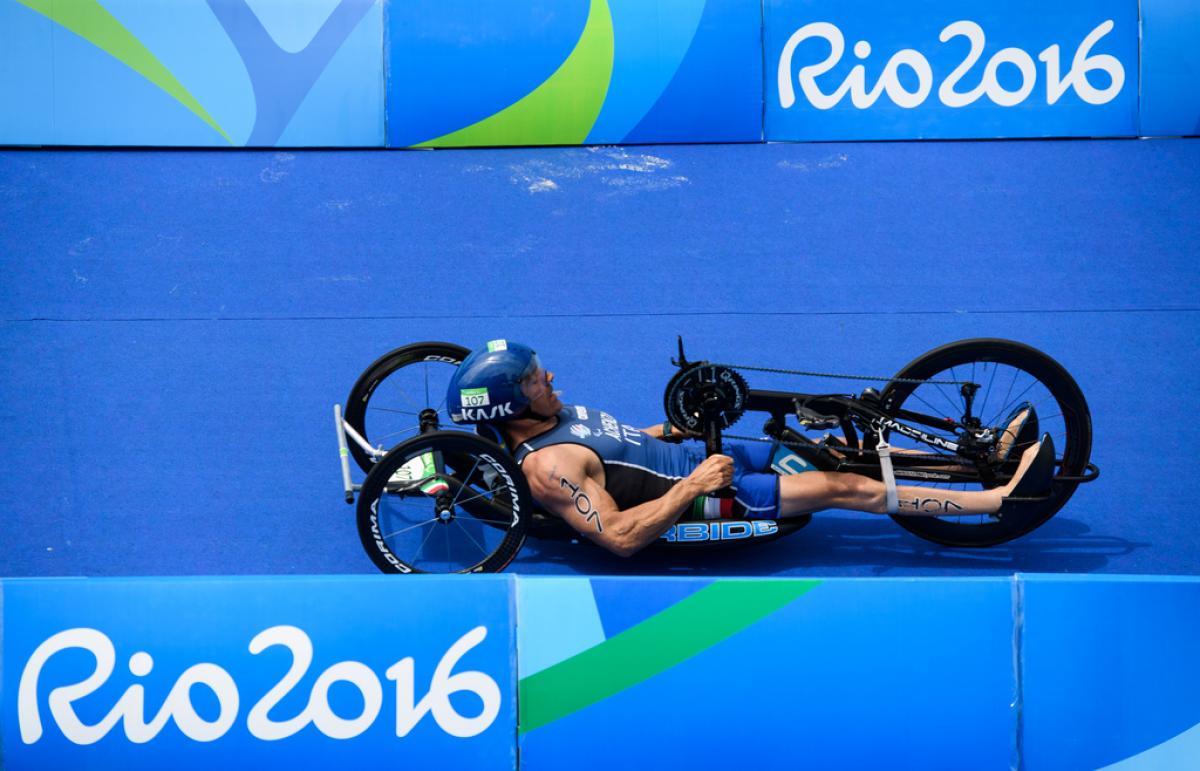 ⒸBob Martin | For OIS
By Adam Bailey | For the IPC

Italian 47-year-old Giovanni Achenza will seek to channel his inner youth once more when the 2019 World Para Triathlon Series gets underway on home ground in Milan, on Saturday.

This event will provide an opportunity for many of the world’s best Para triathletes to test their early season form before Tokyo 2020 qualification begins later this year.

Rio 2016 Paralympic bronze medallist Achenza will be the oldest competitor in the men’s PTWC in Milan. Despite lining up against triathletes more than half his age, he continues to enjoy the challenge of competing.

“I have two daughters aged 27 and 21 so when I can beat their peers it makes me feel younger; it also gives me the strength to do better and better,” he said.

“The fact that they are younger than me adds another challenge which I enjoy. I have to keep working hard to keep up with them, it definitely leads me to be the best athlete I can.

“Every race is different, but the level of the top five is always very high. Just one wrong curve and you lose one or more positions. It’s very competitive but that is what I enjoy.”

The series opener will also be a season debut for Achenza.

“It’s fantastic to have a race like this in Milan,” he said. “We are in Italy so we have to give 110 per cent and honour the Italian public who will be around the circuit supporting us. In every race you go to do the best you can, it would be great to finish on the podium in my home race.”

The top-five PTWC athletes from last year’s World Grand Final will all be in action in Milan, including Paralympic and three-time world champion Jetze Plat.

The men’s PTS2 looks set to be just as competitive with Great Britain’s world silver medallist Andy Lewis aiming to begin his season on a positive note.

Russia’s Anna Plotnikova will feature in the women’s PTS3, while her compatriot Victor Chebotarev will compete in his first World Para Triathlon Series event in the men’s PTS3.

There will be eight triathletes battling it out for the men’s PTS4 title, including France’s Alexis Hanquinquant, who successfully defended his world title last September.

Great Britain’s Hannah Moore will compete in her first race as world champion on Sunday in the women’s equivalent; less than 12 months after making her international debut.

PTVI world champions Dave Ellis and Susana Rodriguez will begin their season aiming to add more accolades to their impressive medal haul in the men’s and women’s events, respectively.

Frenchwoman Mona Francis, who just missed out on a medal at the 2018 World Grand Final, will start as one of the favourites in the women’s PTWC along with Brazil’s Jessica Ferreira, who has started the year strongly.

Germany’s Paralympic champion Martin Schulz will begin his season in the men’s PTS5, while the women’s equivalent looks set to be wide open.