Great day for Great Britain as three golds pour in

Two more individual titles and the team gold, as there was joy for Brazil with bronze for Sergio Oliva. 15 Sep 2016
Imagen 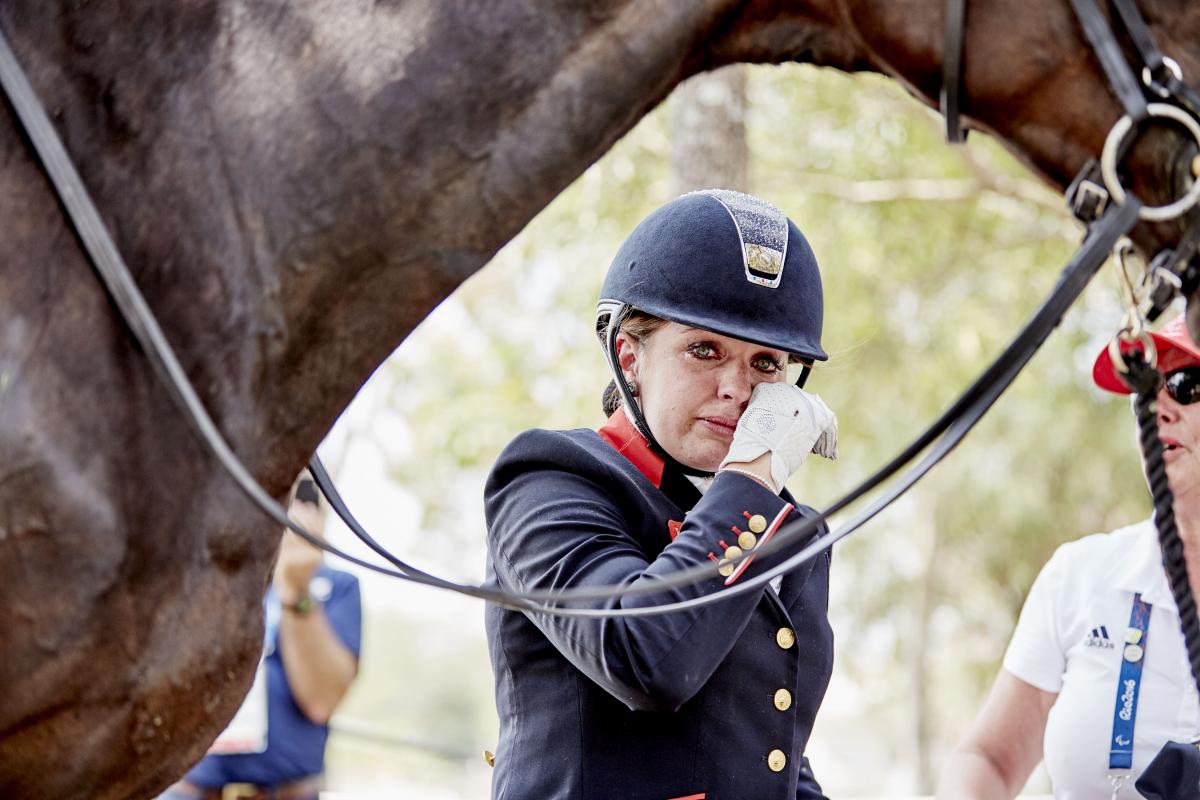 ⒸFEI/Liz Gregg
By By Rob Howell | For the IPC

Following superb wins by British riders in the grades II and Ia individual tests at the Olympic equestrian Centre in Deodoro on Thursday (15 September), Great Britain have won the overall team Championships of the Rio 2016 para dressage competition.

The team have won every Paralympic team competition since the sport was introduced to the Games in Atlanta 1996 and remain undefeated in European and World Championships too – a total of 18 team titles.

“I’m absolutely thrilled,” said Great Britain’s Chef D’Equipe Sarah Armstrong. “I couldn’t have wished for a better result and the guys have been great.

“When I took on the role in November I took a massive personal risk. They were coming off the back of a home Games and it was a big ask to return this and improve on it but I just knew that the athletes, the horses and the amazing support team that we have, I just knew that we could do it.”

“It’s very exciting” said Dunham, who has now won five team titles with the team since starting her Paralympic Games career in Atlanta 1996. “The one horror that all of us have at the moment is being on the team that doesn’t actually win the team gold medal. But we won it, and we won it in style.”

The win was all the sweeter for Baker as it follows her defeat to Van der Horst at the 2014 FEI World Equestrian Games™ (known as WEG) and the 2015 FEI European Championships. In 2014 she was the strong favourite for gold but Cabral was spooked by the TV cameras as he entered the arena.

“I’m so happy. I’m still shaking. I’m still crying,” said Baker. “I was so worried he was going to come in here and do a repeat of WEG. I’m just so proud.

“I just love him so much; he means the absolute world to me. I said to him as we were trotting round in the 10-minute box: ‘Just trust me JP, just trust me,’ and he did. He just worked with me and felt so relaxed. It wasn’t the best test we’ve ever done but I’m just over the moon with him.”

Christiansen won the grade Ia individual title on Athene Lindebjerg with the top score of the week so far, 78.217%. Team mate Anne Dunham, competing in her fifth Games was second, and there was a hugely popular bronze for Brazil’s Sergio Oliva, his country’s second Para dressage medallist after team mate Marcos Alves took two bronzes in Beijing 2008.

"This is surreal at the moment,” said Christiansen. “I've had a change of coach and just injury after injury and up until last week, I didn't even know which horse I would be bringing.

"I've always wanted to do my best at everything I put my hand to – academics, sport. It's going to sound big-headed but I think you have to have more than talent to stay at the top."

“For me it is a dream come true,” added Oliva. ”I have worked for more than 12 years to get this bronze medal so for me it means gold. I’ve worked hard to find the good combination and to get a medal in my home country is amazing. I don’t have any words. I love this. I love this moment. This is a dream.”