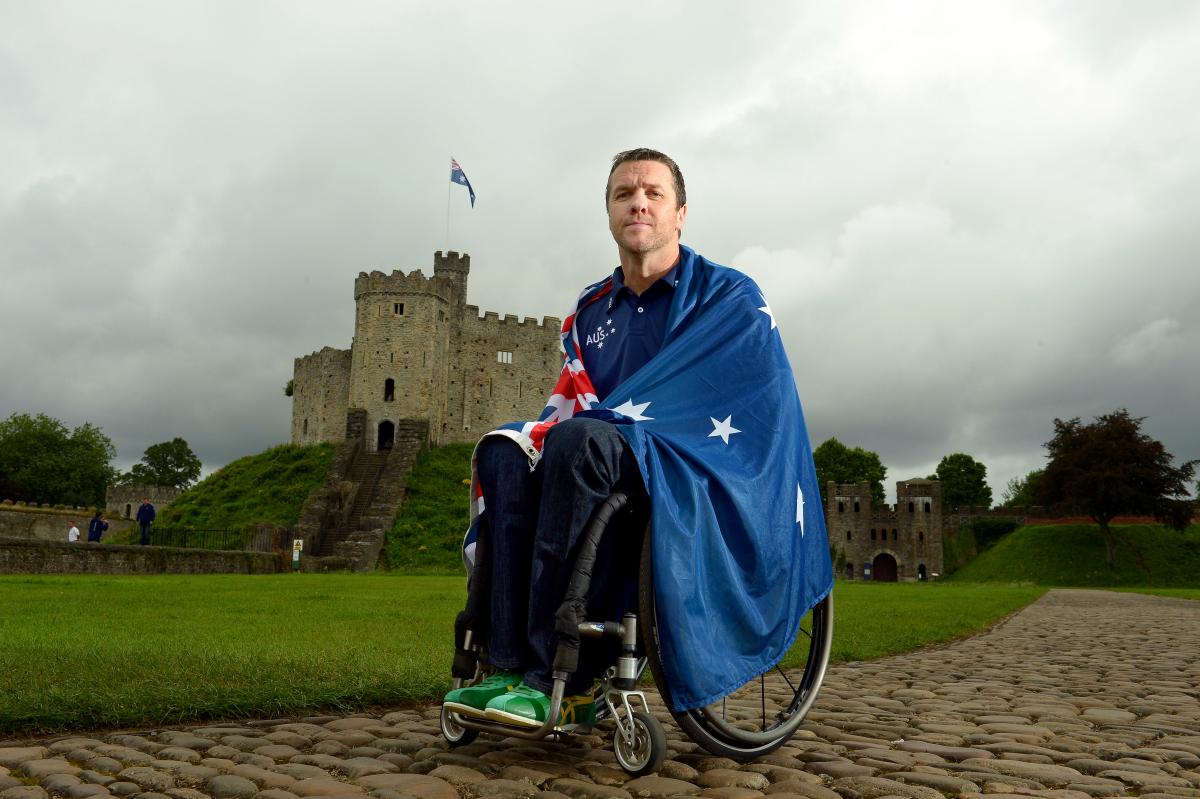 Greg Smith will carry the flag for Australia at the London 2012 Paralympic Games Opening Ceremony.

"He is team-orientated and humble, but fierce in the heat of competitive battle and enormously successful in his chosen disciplines."

The honour of flag bearer was bestowed on the 45-year-old from Buninyong in Victoria on Tuesday (21 August), during a special ceremony for the Australian Paralympic Team at Cardiff Castle in Wales.

With more than 260 members of the 305-strong Australian Paralympic Team watching on, Smith received the flag from Chef de Mission Jason Hellwig, and waved it proudly.

In eight days time, he will perform the same duty in front of 80,000 people as he leads the Australian Team into London’s Paralympic stadium – a moment he admits will be the proudest of his distinguished career.

“I’m thrilled, absolutely thrilled. I’m so proud to be an Australian Paralympian and to be given the honour of leading this team into the Opening Ceremony is definitely one of the highlights. I will never forget this moment,” Smith said.

“It is hard to believe I have been recognised in this way because of the quality of people who could have been given this role.

“I remember in Barcelona in 1992 at my first Games when the flag bearer was announced. I just thought `Wow, that’s something very special.’ I could have never imagined that being me one day. I just remember that feeling of how proud you’d be if you were given such an honour,” added Smith, who was a physical training instructor in the Australian Army, before a car accident in 1986 left him with quadriplegia.

In announcing that the honour would go to Smith, who has won a career total of three Paralympic golds, two silvers and two bronze in two different sports, Chef de Mission Jason Hellwig said he would be hugely proud to march behind him in the Opening Ceremony.

“Greg embodies the virtues of the Australian Paralympic movement to the very highest standards. He is team-orientated and humble, but fierce in the heat of competitive battle and enormously successful in his chosen disciplines,” Hellwig said.

“To be the Australian flag bearer is a major honour in an athlete’s career. It is an appointment which considers not only an athlete’s performance on the field of play, but equally, the attributes and characteristics that represent the standards, culture and meaning of the Australian Paralympic movement.”

As a wheelchair track racer who competed at the Paralympic Games in 1992, 1996 and 2000, Smith won a total of three gold, two silver and two bronze medals before he retired in 2002, only to return to competitive sport following the Athens 2004 Paralympic Games.

But rather than opting to re-enter athletics, a sport that made him a Paralympic legend, Smith chose to pursue a career in the brutal game of Wheelchair Rugby.

He made his international wheelchair rugby debut in 2006, and soon became an integral part of the Australian team.

He has gone on to help Australia claim silver medals at the 2008 Paralympic Games and 2010 World Championships, and now has 61 international appearances to his name.