Due to heavy rain, Sunday's three main draw singles finals had to be moved indoors. However, this did not affect the tennis itself as 500 spectators lined-up to watch the women and quad singles finals being played simultaneously.

In the men’s singles final Kunieda showed exactly why he is the current World number 1 taking just 50 minutes to register a comprehensive 6-0, 6-1 victory over compatriot and friend Satoshi Saida.

The women’s singles final was a much closer affair with world number 8 and first time Super Series finalist Marjolein Buis pushing second seed Jiske Girrioen all the way in a three-set spectacular.

Despite racing into an early 3-0 lead in the first set, Girrioen came from behind to take it 6-4. Buis held her nerve in the second set to take it 6-3.

The third and final set was a tense and nervy affair which had the spectators on the edge of their seats with some stunning rallies. Girrioen held on though to take the decider 6-3.

The last and only time the two had played each other Gershony had taken victory, however it was Wagner who was to be the winner in Japan. A tense first set was decided by a tie break in the American’s favour. He then powered through the second set 6-2 to retain his title, the day after he had also taken the quad doubles title.

Later in the day the weather dried up, allowing the men's and women's doubles finals to be played outdoors.

Fresh from his singles win, Kunieda teamed up with Saida to comfortably beat second seeds Ben Weekes of Australia and Yoshinobu Fujimoto 6-1 6-2 in less than an hour.

In the women’s doubles top seeds Griffioen and Aniek van Koot lived up to their status of favourites as they clinched the first set 6-4. However, second seeds Buis and 17 year old Yui Kamiji were gelling well and hit back to take the second set 6-3.

It was all to play for in the super tiebreak and the all-Dutch pairing of Griffioen and van Koot were getting frustrated as they quickly found themselves 3-0 down.

On the other hand, the confidence of Kamiji was sky high as she raced around the court and produced two defining moments with a great volley at the net and a powerful forehand down the line. The Japanese teenager's smile was infectious and the crowd responded with great applause as she and Buis stormed through the super tiebreak to seal the title 4-6 6-3 (10-4). 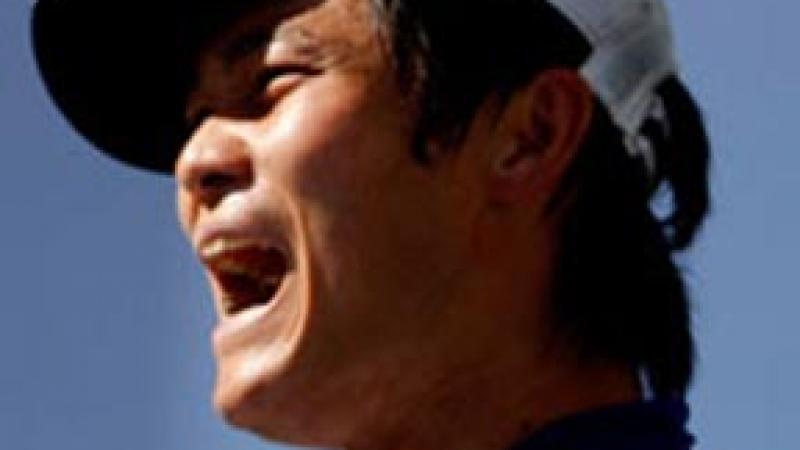