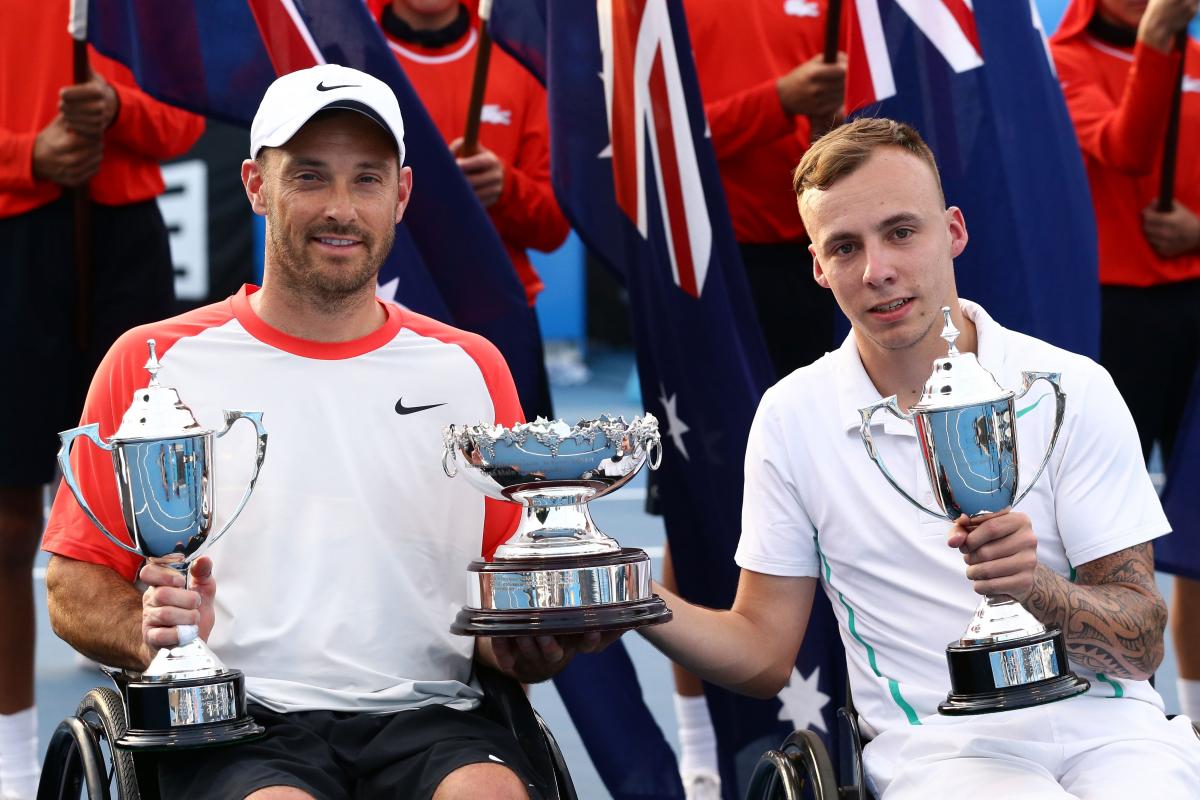 David Wagner and Andy Lapthorne partnered to win the quad doubles competition at the 2014 Australian Open at Melbourne Park.

“I’m really happy to get my third Australian Open title and want to thank David after we have been on opposite sides of the net so often in other Grand Slam finals. Australia is where I made my Grand Slam debut in 2011 and it’s great to get another title. This one is dedicated to my late auntie.”

Experience prevailed on Thursday (23 January) at the Australian Open when Andy Lapthorne and David Wagner won the first title at the first Grand Slam of the year with a straight sets win in the quad doubles final.

After the four players had taken to the courts at Melbourne Park for their second set of singles round-robin matches, top seeds Lapthorne and Wagner lined up against Australian Dylan Alcott, who is playing in his first Grand Slam and South Africa’s US Open quad singles champion Lucas Sithole, who is playing in his second Grand Slam after his memorable debut in New York last September.

Lapthorne and Wagner secured an immediate break at the start of the quad doubles final for a 2-0 lead, but trailed Alcott and Sithole 3-2 before asserting to take the opening set.

After securing another break at the start of the second set, Lapthorne and Wagner again had to battle hard as their opponents drew back on level terms, but after having match points at 5-3 and 5-4 they eventually converted their fourth match point to wrap up a 6-4, 6-4 victory in their first ever tournament together.

It was Wagner’s fifth Australian Open doubles title after partnering fellow American Nick Taylor to victory in 2008, 2009, 2010 and 2013, while for Lapthorne it was a third quad doubles title in Melbourne after he partnered his fellow Briton Peter Norfolk to back-to-back win in 2011 and 2012.

“I’m really happy to get my third Australian Open title and want to thank David after we have been on opposite sides of the net so often in other Grand Slam finals,” Lapthorne said. “Australia is where I made my Grand Slam debut in 2011 and it’s great to get another title. This one is dedicated to my late auntie.”

Earlier in the day Wagner gained a second successive tense win the in the round-robin phase of the quad singles to book his place in Saturday’s (25 January) final quad singles and keep his title defence on course.

The world No. 1, who is bidding for his third Australian Open quad singles title, prevailed 7-6, 7-6 against Sithole.

However, Lapthorne saw his bid for a place in his second Australian Open singles final come to an end after his second loss in successive days as the event continued to produce some gripping finales.

Lapthorne saved six match points against Alcott, whose career in the quad division of wheelchair tennis only began at the start of this year. The 23-year-old local hope, a two-time wheelchair basketball Paralympic medallist had a 5-2 lead and three match points in the deciding set, but eventually held on for a thrilling 6-4, 5-7 8-6 victory.

With Alcott and Sithole now having both beaten Lapthorne, they have one win apiece after two matches and will go head-to-head to decide which of them will go forward to meet Wagner in the final.

One day after winning his first ever singles match at a Grand Slam, Argentina’s world No. 5 Gustavo Fernandez ended Stephane Houdet’s bid for a second straight Australian Open final as defending champion Shingo Kunieda produced a peerless display in the other men’s semifinal.

Fernandez swept through the opening set against his French opponent, but Houdet fought back in the second set. Though Houdet could not force a decider and 20-year-old rising star Fernandez advanced 6-1, 7-6(4) to go on to his first Grand Slam final.

Kunieda raced to a 6-0, 6-0 victory in his semi-final against 2012 Australian Open champion Maikel Scheffers. Scheffers won his first Australian Open two years ago in Kunieda’s absence, but his title hopes this year ended abruptly as the Dutchman managed to win just 15 points in the whole match.

With van Koot unable to defend her title in Melbourne as she continues to recover from a tendonitis injury, last year’s runner-up Ellerbrock secured her place in her second successive Australian Open final after a dominant 6-1, 6-1 victory over world No. 7 Jordanne Whiley as the Brit struggled in her first Grand Slam semi-final.

Scheffers put his singles semi-final woes behind him to reach a first Grand Slam final partnering Great Britain’s Gordon Reid. Top seeds Reid and Scheffers, winners of their first Super Series title together just over a week ago in Sydney, took a 3-0 first set lead against Fernandez and Michael Jeremiasz of France en route to easing to the first set of their semifinal. Reid and Scheffers faced a tougher challenge in the second set, but ultimately wrapped up a 6-2, 7-5 victory.

In the other semi-final Kunieda partnered with Houdet to defeat Australian Adam Kellerman and Belgian Joachim Gerard 6-1, 6-4. 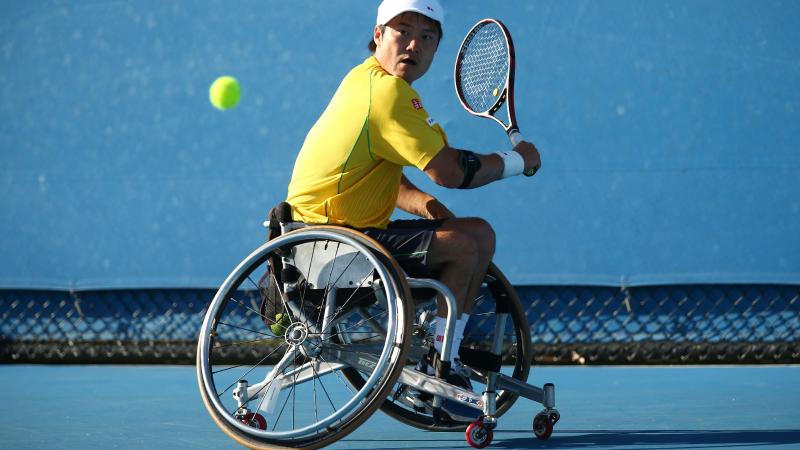