Many shooting athletes competing on Day 5 have already won a medal in the London 2012 Paralympic Games. Now they have to aim further, as the distance is pushed back to 25m. 03 Sep 2012
Imagen 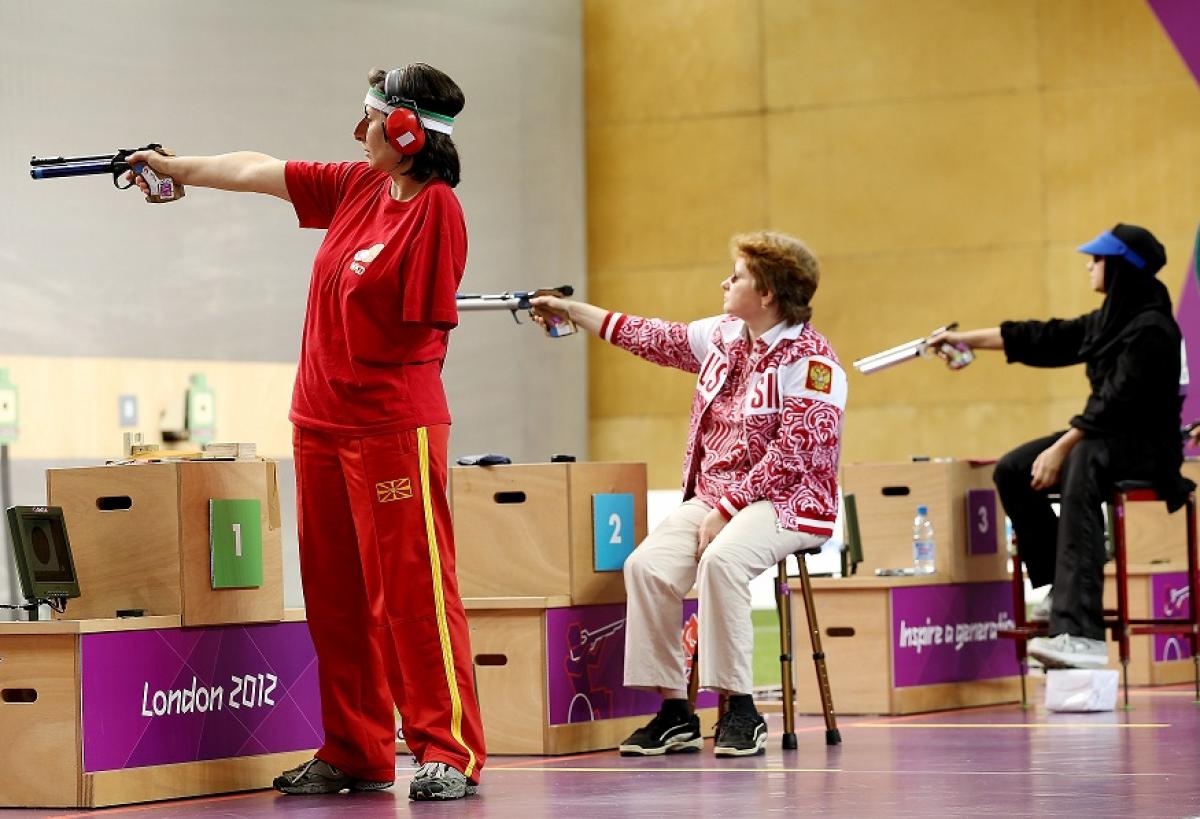 Olivera Nakovska-Bikova from Macedonia was the gold medallist of the women's P2 10m Air Pistol SH1 event in the London 2012 Paralympic Games.

Olivera Nakovska-Bikova from Macedonia FYR is in action again after winning a gold medal in the women’s P2 10m Air Pistol SH1 on Day 2 of the Games.

Day 5 of the London 2012 Paralympic Games shooting competition will require a touch more accuracy from the shooters, as the distance is pushed back to 25m.

The day’s only event is the mixed P3 25m Pistol SH1 competition and the field is strong.

Olivera Nakovska-Bikova from Macedonia FYR is in action again after winning a gold medal in the women’s P2 10m Air Pistol SH1 on Day 2 of the Games. She set a world record in qualifying for this event and was a class above her rivals.

Park Seakyun is another gold medal winner from earlier in the London 2012 programme who will be competing on Day 5. Park won the gold medal in the men’s P1 10m Air Pistol SH1 and will be keen to add to Korea’s medal tally.

Another Korean shooter primed for success is Lee Juhee. Lee won a bronze medal in the men’s P1 10m Air Pistol SH1 and after coming third in that event, he made is intentions clear for competition on Day 5.

"I am sorry that I missed the gold,” he said.

"I am competing in three competitions. The 25m pistol - that competition is my main focus.”

Korhan Yamac of Turkey will front up again after coming second in the men’s P1 10m Air Pistol SH1 at London 2012. Yamac was tied with eventual winner Park at the end of the final, but lost out to the Korean in the shoot-off.

Sergey Malyshev of Russia is another to watch, although don’t expect to get an insight into how he thinks he might perform.

"I'm sorry I'm not a meteorologist, I can't guess my performance," he said when asked how he thought he might shoot in the P3 25m Pistol SH1 competition.

Malyshev’s fellow Russian, Valery Ponomarenko, might be the strongest of all for this event on Day 5. He holds the world record score of 777.4 and warmed up for Day 5 nicely, finishing fifth in his earlier event, the men’s P1 10m Air Pistol SH1.

After his fifth place finish, Ponomarenko said he would need to be in a good mental state to perform well.

He said: "In shooting I think that 99 percent is in the head and one percent is purely technical stuff. If the head is not working, you might as well put the pistol down".

Day 5 of the shooting programme at the London 2012 Paralympic Games is scheduled to start at 09:00 on Monday (03 September) at the Royal Artillery Barracks.