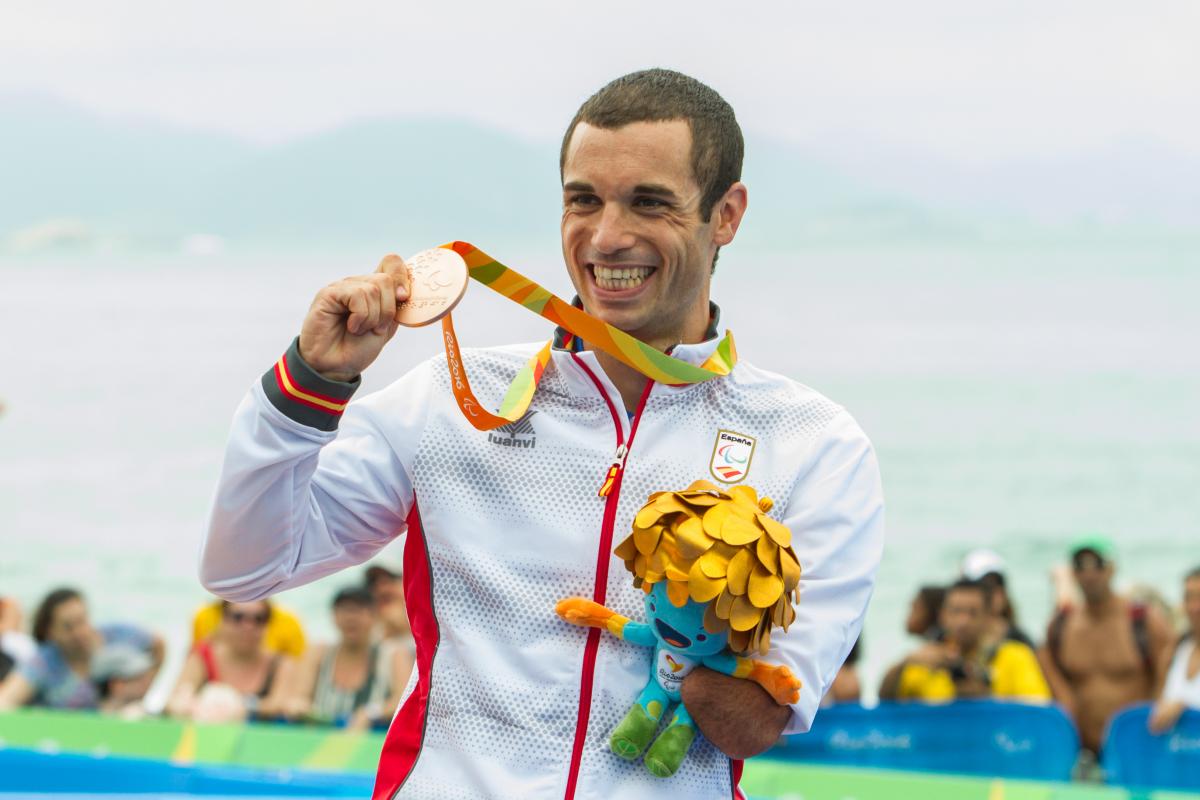 ⒸCicero Rodrigues
By Adam Bailey | For the IPC

“Kitzbühel was the final test to check that everything was OK. To finish second and without any more injury problems was a magnificent result for me.”

Spain’s Jairo Ruiz Lopez is targeting a podium place at the International Triathlon Union (ITU) Para Triathlon World Cup in Altafulla, Spain, on Sunday (2 July) as he continues his comeback from a knee injury.

The 28-year-old won bronze at both the 2016 World Championships and Paralympic Games, but an injury to his right knee has disrupted his progress this season.

“When I came back from Rio I continued training for a medium distance triathlon,” Ruiz said. “In training one day my knee started to hurt. It happened suddenly, without a blow or anything. I had planned to take this year easier, but, in the end, I have had to rest [anyway] because of the injury.”

Ruiz returned to competition at the recent European Championships in Kitzbühel, Austria, and the PTS5 athlete was satisfied with his performance considering he was not at 100 per cent strength.

“I was very pleased with silver as the injury has disrupted my training over the past few months and I haven’t been able to run,” Ruiz said. “Kitzbühel was the final test to check that everything was OK. To finish second and without any more injury problems was a magnificent result for me.”

The Spaniard is now targeting the podium on this weekend’s Altafulla World Cup.

“It is a race that I know well because I have run there several times in national championships and I like the course,” Ruiz said. “I am hoping to win a medal in Altafulla - standing on the podium in your home race is always special.”

France’s Yannick Bourseaux is likely to be Ruiz’s nearest challenger in the men’s PTS5 class. Bourseaux finished just ahead of Ruiz at last year’s World Championships, winning the silver medal, while Ruiz got the better of the Frenchman in Rio.

In the other events, France’s Ahmed Andaloussi will be looking to repeat his victory from the first World Cup event of the season in Besancon in the men’s PTHC class. Andaloussi’s compatriot Mona Francis will be hoping for the same in what looks set to be a hotly-contested women’s race.

Great Britain’s John Fulton will want to build on his fourth-place finish from his international debut in Besancon in the men’s PTS2 class. Fulton will, however, face competition from France’s Geoffrey Wersy and Japan’s Kenji Hashimoto in Altafulla.

The men’s PTS4 could see two European medallists battle it out in Altafulla with Great Britain’s Steven Crowley and Spain’s Alejandro Sanchez Palomero likely to be contesting the victory. Crowley finished second at the European Championships, 31 seconds ahead of Palomero.

The newly crowned women’s PTS4 European champion Cassie Cava will be looking to add a World Cup to her continental triumph. The British Para triathlete will face competition from her compatriot Ruth Wilson and Japan’s Mami Tani.

The Spanish crowds will be hoping for more home success in the men’s and women’s PTVI classes. Spain’s Hector Catala Laparra and Susana Rodriguez both won a silver medal at the European Championships and they will be looking to go one better in Altafulla this weekend.

More information on the World Cup in Altafulla can be found at the ITU’s website.