Mascots arrive in Rio ahead of Monday's launch 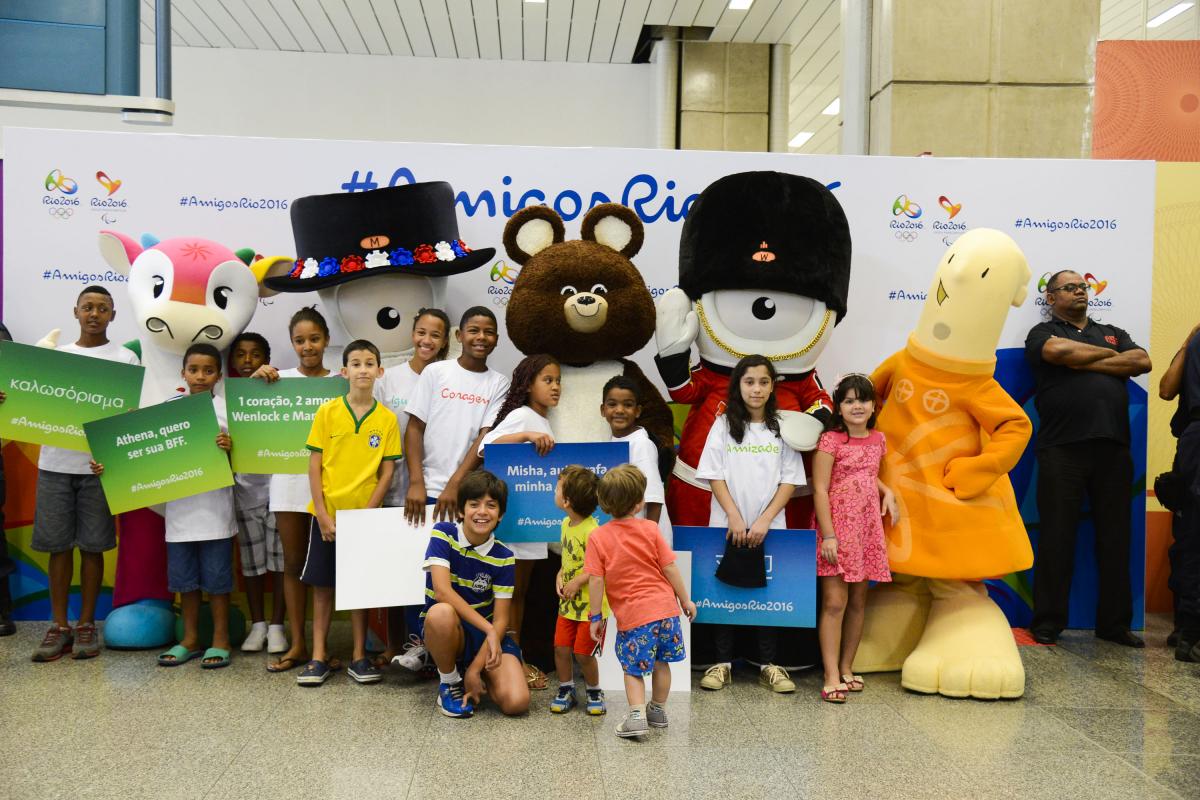 Misha (Moscow 1980), Athena (Athens 2004), Fu Niu Lele (Beijing 2008), Wenlock and Mandeville (London 2012) arrived in Rio around noon and were welcomed with a major celebration and crowds of curious bystanders circulating through Galeão’s Terminal 2.

The bear named Mikhail Potapych Toptygin (a.k.a. Misha) was born in the icy lands of Russia. But his friendliness and cuteness conquered the hearts of everyone around the world, making him one of the most popular mascots in the history of the Olympic Games.

Bears are very common and a big part of Russia’s culture. The animal is so important that it was chosen to become the mascot of the 1980 Moscow Olympics by a TV network and sports newspaper survey.

Along with her brother Phevos, Athenà is the 2004 Athens Olympics mascot. Her name is a tribute to Athena, goddess of wisdom and protector of the Greek capital. With big feet and a bell-shaped body, the mascots were inspired by clay sculptures from Ancient Greece, known as daidala.

Fu Niu Lele, the friendly colorful cow, was created by designer Wu GuanYing. The artist chose the animal as the 2008 Beijing Paralympic Games mascot because he believed cows are friendly and have a special bond with those who care for them. Her colors were inspired by the traditional gifts of the Chinese New Year and its name means good fortune.

These are likely the most high-tech mascots in the history of the Olympic and Paralympic Games.

They were created from two drops of steel used to build the Olympic Stadium of London. The eyes are made of cameras that film everything and the lights in their heads symbolize the famous London taxis.

Their names are inspired by British cities that are part of the history of the Olympics. Much Wenlock is where the games were played, which inspired Baron Pierre de Coubertin to create the concept of the modern Olympic Games in 1896. Stoke Mandeville is the name of the city and hospital where Dr. Ludwig Guttmann created the precursor to the Paralympic Games, the Stoke Mandeville Games, which were created to help rehabilitate wounded World War II veterans.

Caption
Named after the Stoke Mandeville Hospital, Mandeville was the mascot of the London 2012 Paralympic Games.