Mayor of London meets stars ahead of NEC Masters 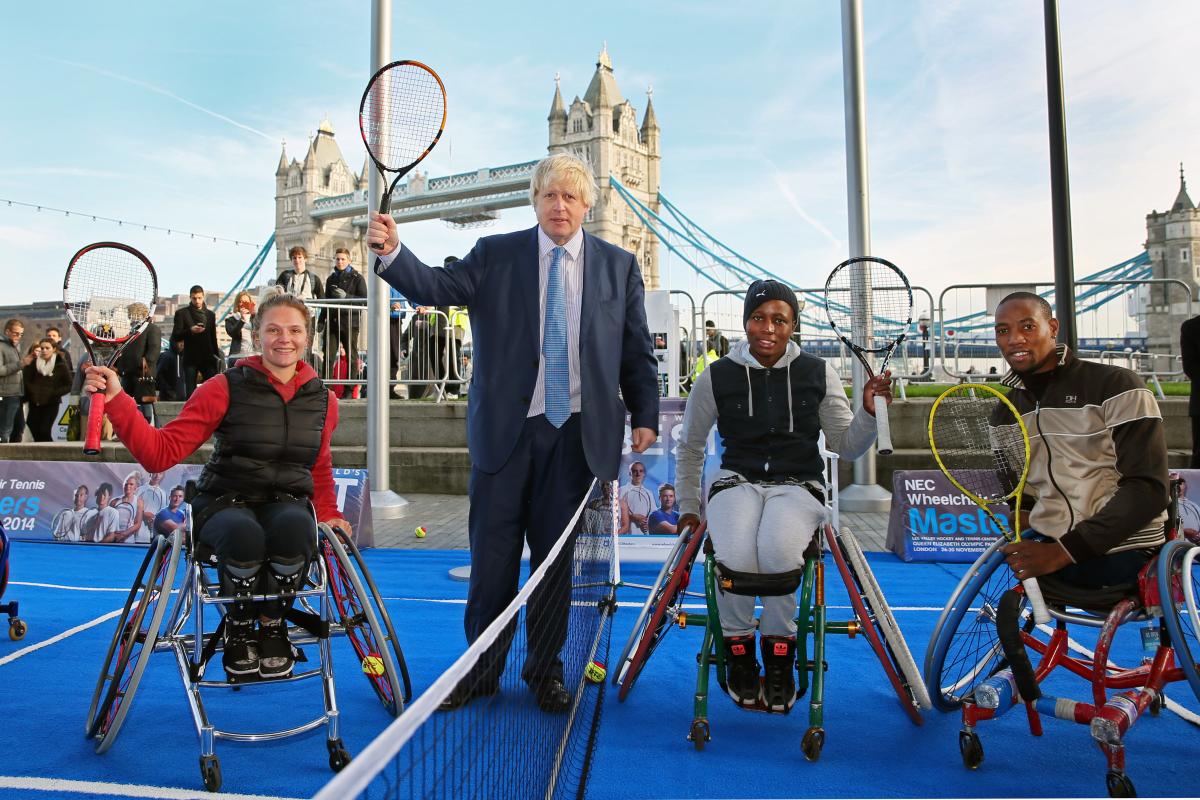 Boris Johnson, the Mayor of London, meets a number of wheelchair tennis stars ahead of the NEC Wheelchair Tennis Masters in Great Britain.

Boris Johnson, the Mayor of London, has welcomed the world’s best wheelchair tennis players back to London ahead of the 2014 NEC Wheelchair Tennis Masters with a game of mini tennis at City Hall, London, Great Britain.

An elite field of 20 players are in London to compete in the competition at the Lee Valley Hockey and Tennis Centre in the Queen Elizabeth Olympic Park, the venue used during the London 2012 Paralympic Games, between 26-30 November.

Great Britain’s Jordanne Whiley, who made history in 2014 when she, alongside Japan’s Yui Kamiji, became the first non-Dutch pair to win the calendar year of Grand Slam doubles titles, met the Mayor and gave him some tips on wheelchair tennis.

And the Mayor is excited at the prospect of having these athletes in the capital of Great Britain once again.

“The NEC Wheelchair Tennis Masters is the latest major sporting spectacular to be held in the capital,” said the Mayor of London.

“It underlines the incredible legacy of hosting the London 2012 Games and is a brilliant chance to see some of our Paralympic stars in action.

“Over the coming years, London will be holding the Rugby Union World Cup final, the World Athletics Championships and the final of the Euro 2020 football championships.

“It is fantastic that we can add the NEC Wheelchair Tennis Masters to that stellar line-up and Queen Elizabeth Olympic Park will provide an inspirational setting for competitors and spectators alike.”

The NEC Wheelchair Tennis Masters will also see a number of international stars, with the Mayor also meeting the likes of South African Paralympians Lucas Sithole and Kgothatso Montjane ahead of the competition.

Only the top eight ranked men’s and women’s singles players, and the top four ranked quad singles players have qualified for the competition in what is one of the most prestigious events outside of the Grand Slam tournaments.

And the USA’s David Wagner will be looking to retain his quad title for the second time, but will face stiff competition from Great Britain’s Andy Lapthorne, South Africa’s Sithole, and Australia’s Dylan Alcott.