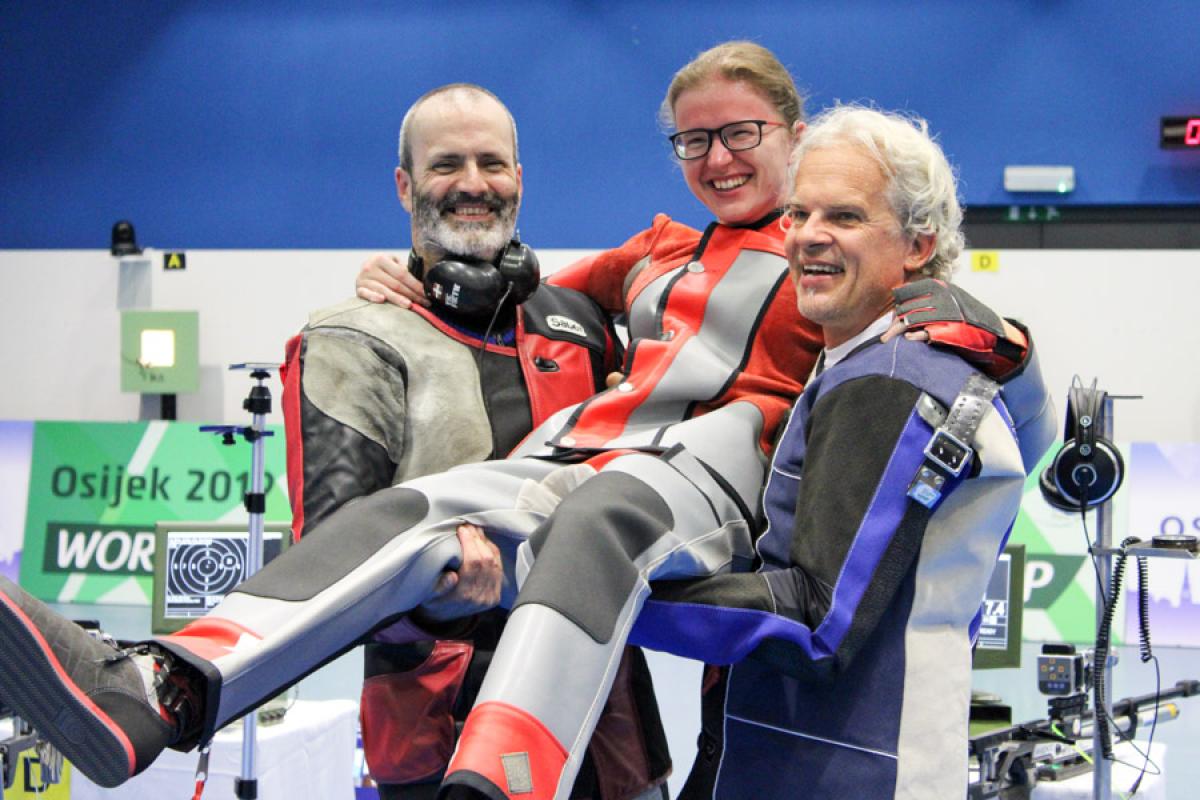 A beaming smile broke across Barbara Moskal’s face as she acknowledged the crowd after a remarkable performance in the inaugural VI (vision impaired 10m air rifle) competition at the World Shooting Para Sport World Cup on Friday in Osijek, Croatia.
Poland’s Moskal had not only won gold, but set a new world record with 214.2 points, ahead of Spain's Ager Solabarrieta Txakartegi and Austria’s Patrick Moor who took silver and bronze.
“This is normal, I’m used to winning,” she laughed, with a shrug.
But this particular competition was more than just about medals and records. It was the first World Cup event for vision impaired athletes since the new class was adopted by World Para Shooting Sport in February.
“It’s very cool,” said Moor. “I’ve been pushing for this for five years, and everyone in our shooting family is very happy that we’re now in this situation, that we can shoot at World Cups and the World Championships. I hope that we can now take the next step to the Paralympics. At the moment, every nation has the same problem, there is no money to help people trying to take up vision impaired shooting but if we get to the Paralympics, that will change.”
Moor’s own medal completed a remarkable journey of his own. He has only been training again for six months, after suffering a horrific car crash which saw him unable to shoot at all for two years.
“I was not sure I would ever be able to compete again,” he said. “I broke seven ribs and one leg was completely shattered. I was in hospital for many months. So this third place is very special.”

I hope that we can now take the next step to the Paralympics. At the moment, every nation has the same problem, there is no money to help people trying to take up vision impaired shooting but if we get to the Paralympics, that will change

Double gold for Doroshenko
It has been a hugely successful World Cup for Ukraine so far, and Andrii Doroshenko continued his remarkable streak of form by winning gold in the R7 (men’s 50m air rifle 3 positions SH1) to go with yesterday’s R1 (men’s 10m air rifle SH1) victory.
Earlier in the afternoon, 2018 World Championship silver medallist Anna Normann won the R8 (women’s 50m air rifle 3 positions SH1). The Swede scored 454 points to pip Germany’s Natascha Hiltrop and Britain’s Lorraine Lambert to the gold.
“This is pretty big for me, I’ve never won this before,” said Normann. “I kept calm, followed my plan and it was nice to be able to shoot well in qualification, and then back it up in the final.”
Normann used to compete as an able-bodied athlete before breaking her ankle, and subsequently switching to shooting Para sport last year.
“This has been the biggest challenge for me,” she said. “I’ve competed as a shooter for many years, but I know how my ankle used to feel and behave, and it doesn’t do that anymore.”
Coach Johnson returns with a bang
Five months ago, New Zealand’s Michael Johnson was not competing at the World Cup in Al Ain, UAE, because he was there as a coach, supporting some of the country’s most talented young shooters in their bid to qualify for October’s World Championships in Sydney, Australia.
But rather than hampering him, his work as a part-time coach appears to have done wonders for his own shooting, as he clinched gold in the R4 (mixed 10m air rifle standing SH2) in the final event of day two.
“It’s kind of awesome to come back and find that I’m not too rusty,” said Johnson. “My last World Cup as an athlete was in October last year. But I think being a coach helps a bit, it grounds you, keeps you a bit focused and it definitely gives you an appreciation for other coaches, that’s for sure. I think I’ll do a mix of coaching and competing going forwards, and we’ve got new athletes coming through and they’ve got nobody to support them. So I feel it’s my duty to help them wherever I can.”
The Osijek World Cup continues on Saturday with the R3 (mixed 10m air rifle prone SH1) as well as the first day of Para trap. It is being streamed live on World Shooting Para Sport’s website.