In addition to world and national records, many swimmers put themselves into contention for a place at Rio 2016. 24 Apr 2016
Imagen 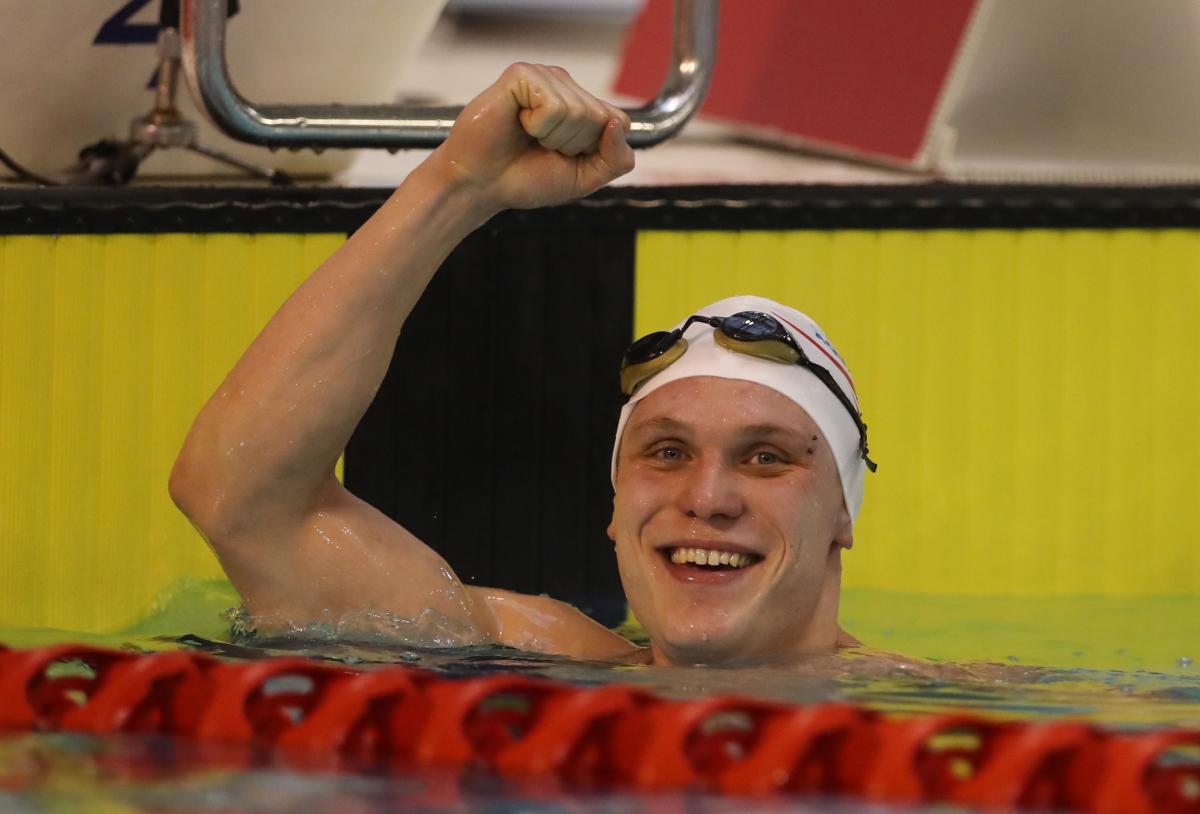 The opening day of the British Para-Swimming International Meet 2016 in Glasgow on Saturday (23 April) saw 11 swimmers meet the consideration times for the Rio 2016 Paralympic Games.

Aaron Moores was the stand out performance of the day lowering the men’s100m SB14 breaststroke world record twice.

In the heats, Moores set the new world standard to 1:06.49 and went head-to-head with Scott Quin in the final to stop the clock at 1:06.33 which sits under the qualification time for this summer’s Games. He won gold with 1016 points.

“It’s just an amazing feeling to come here and getting a two second PB,” Moores said.

“I’m training in Swansea now and the coach there has pushed me on so much. It just shows now that I’ve got the world record twice in one day.

“The plan was to get a PB and make the qualifying time but getting the world record has boosted my confidence so much.”

Quin also secured a time that puts him in contention for his first Paralympic Games. He touched the wall in 1:06.97 and took silver in 988 points.

Hannah Russell (S12) took the title in the women’s 100m freestyle in a time of 59.40. That time put Russell under the consideration time for Rio 2016 Paralympic Games.

“I’m really pleased with that,” Russell said. “I’ve come back from the heats and improved in the finals. Going under the qualification time in the heats and finals is what I came here to do so I’m really happy with that.

“When I got selected for London it was a dream come true and going to Rio is something I’ve dreamt about since I was younger. I was one of the youngsters watching Ellie Simmonds winning gold in Beijing and that inspired me. For me to qualify and hopefully be selected is still a bit surreal.”

She was joined on the podium by four-time Paralympic champion Eleanor Simmonds (S6) who claimed the silver medal also achieving a time worthy of Rio nomination; 1:15.11.

Susie Rodgers also secured a time that puts her into the bracket for consideration for Rio after reaching for the wall in 1:13.42.

The men’s 100m freestyle saw Josef Craig (S8) crowned gold medallist of the competition, his first of the six-day meet. Craig finished in a time of 59.32 and secured a total of 834 points.

Andrew Mullen (S5) swam to a time of 1:16.13 which is under the qualification time for the Rio 2016 Paralympic Games.

Two world records lit up the women’s 100m breaststroke; Spain’s Michelle Alonso Morales broke the record for the second time during the day in her class, lowering the S14 time to 1:12.61.

Silver was taken by Bethany Firth, her time of 1:13.99 placed her under the under the consideration time.

Rebecca Redfern was the bronze medallist in the women’s 100m breaststroke and set a new world time of 1:16.86 in the SB13 classification.

Charlotte Henshaw (SB6) hit the nomination time twice through the heats and finals of the 100m breaststroke. In the final she hit 1:39.46 to put herself in contention for her third Paralympic Games.

National Performance Centre swimmer Claire Cashmore (SB8) also put her name forward for her fourth Paralympic Games after achieving the nomination time in the 100m breaststroke. In the heats she clocked 1:21.67.

Harriet Lee (SB9) achieved the time needed to put herself in contention for nomination to the Rio 2016 Paralympic Games after hitting 1:17.85 in the finals.

Lyndon Longhorne was the sole competitor in the men’s 50m breaststroke final which saw him set a new British record.