Rowers battle it out in repechages at Eton Dorney 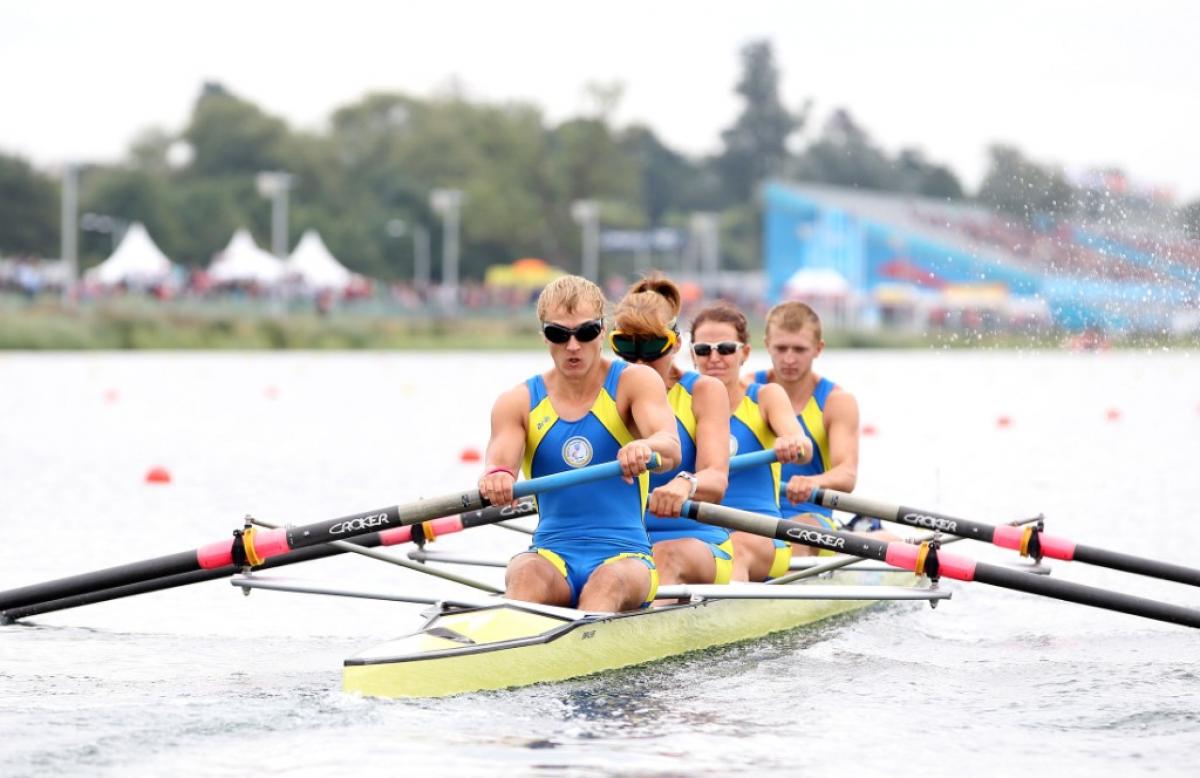 The Ukrainian Mixed Coxed Four - LTA4Mix+ won the repechange during Day 3 of the London 2012 Paralympic Games.

With the winners of Friday’s (August 31) rowing heats enjoying a day off, the remaining competitors battled it out in the repechages to qualify for the A final at Eton Dorney.

USA and Brazil had a good morning as both nations qualified two boats for Sunday’s (1 September) medal events. The rising standard of the sport was also highlighted, with a number of former world championship medallists failing to finish in the top two. The 2009 and 2010 trunk and arms mixed sculls world champions from Ukraine, Dmytro Ivanov and Iryna Kyrychenko, were the highest-profile boat to miss out only doing enough to finish third.

Israel’s Moran Samuel and Claudia Santos of Brazil demolished the rest of the field in the first repechage of the women’s arms only single sculls. The second was much closer, but 2010 world champion Nathalie Benoit from France and Canada’s Joan Reid will also be part of the field that attempts to beat the favourite for gold, Alla Lysenko from Ukraine.

“Tomorrow will be difficult because we all know who is going to win,” said Benoit. “Even if she is ill, I think Lysenko will still have enough. The rest of us are fighting for two places on the podium.”

The second event featured Erik Horrie from Australia, whose fiancee gave birth on Wednesday (29 August). He finished well clear of Korea’s Jun-Ha Park in the first race of the men’s arms only single sculls, while Aleksey Chuvashev of Ukraine and Luciano Luna de Oliveira of Brazil made up the top two in the second.

Horrie claimed he would still have been on the water training if he had not been racing, and that even becoming a father for the third time had not disrupted his preparations too much.

“I was hoping my fiancee would have it last week,” he explained. “I gave her my training schedule, but it didn't work out. I'm over the moon, though, that's for sure.”

In the trunk and arms mixed double sculls, Nick Beighton and Samantha Scowen of Great finished first in Repechage 1, while the USA’s Oksana Masters and Rob Jones just beat the Australian boat to give themselves a chance of a podium finish. China is the favourite for the final, but Jones claims their boat could be one to watch out for.

“Today we weren't concentrating on winning,” he said. “We just wanted first or second place to preserve energy. We need to make sure we are as fresh as possible for tomorrow, then try and catch the Chinese.”

Coxswain of the Italian legs, trunk and arms mixed four, Alessandro Franzetti, was satisfied to have made the final after beating the USA into second place. The 2008 Paralympic champions will now compete against the host nation, Great Britain, in Sunday’s final.

“It will be the biggest crowd we have ever rowed in front of but it won't make us more nervous. It will charge us up – supercharged,” Franzetti said.

Ukraine and China also qualified, finishing well ahead of Canada and Ireland.