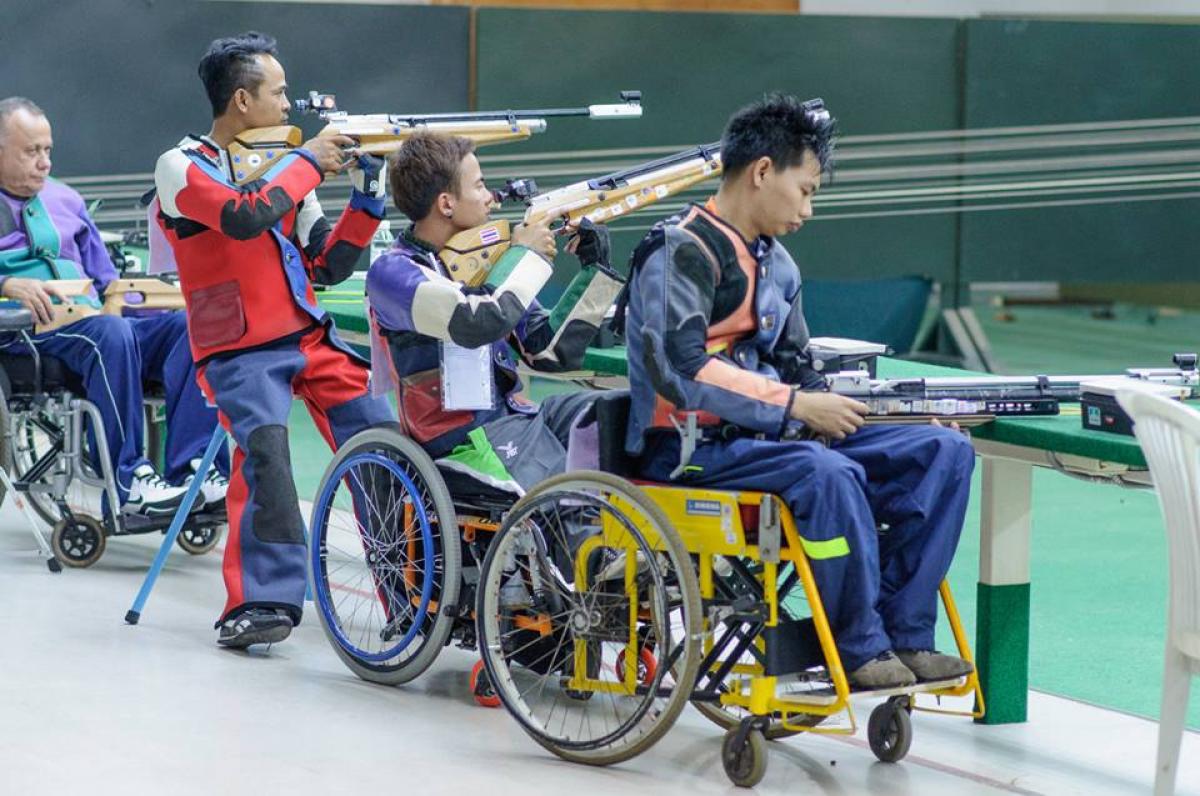 South Korea won 22 of the 42 medals available at the last stop on the 2013 IPC Shooting World Cup in Bangkok, Thailand.

ⒸSports Authority of Thailand
By Jake Wright | For the IPC

One hundred-forty athletes from 20 National Paralympic Committees, including Kenya and Kuwait for the first time, attended the final edition of the World Cup, which has been building toward the highly anticipated IPC Shooting European Championships.

The 42-strong South Korean team won a total of 22 medals out of a possible 42 up for grabs.

The Thai athlete also had to settle for silver in the P4 (50m pistol mixed SH1) class, as South Korea’s Juhee Lee outscored Bordin to take pole position by 11 points.

Juyoung Kang of South Korea stopped Ukraine’s Vasyl Kovalchuk - who was on fire, taking fire in the R5 and R9 categories – from reaching a gold medal hat trick, beating the Paralympian 210.3 to 208.7 in the R4 (10m air rifle standing Mixed SH2) final.

As a final show of domination, it was an all-South Korean affair on the podium for the R6 (50m Rifle Prone Mixed SH1) medals. Youngjip Shim beat teammate Haksun Kim by 0.4 of a mark to decide the gold and silver, whilst Jae Yong Sim took bronze.

The South Korean’s didn’t have it all their own way though, as Beijing 2008 Paralympic champion Veronika Vadovicova continued on her run of form this season by scoring 204 to beat Myungsoon Kang (203.3) and Yunri Lee (183.4) for the gold in the R2 (10m air rifle standing women SH1) final.

IPC Shooting’s One to Watch Abdulla Alaryani, of the UAE said in a post-London 2012 interview that he would be using the IPC World Cup competitions to win more medals for his country, and he achieved exactly that setting new regional and world final records in the R7 (50m Rifle 3 Positions Mixed SH1) to add another gold to his collection.

The US Army Marksmanship Unit’s John Joss took bronze at his first IPC Shooting competition in Turkey during the R3 (10m air rifle prone mixed SH1) final back in May.

One hundred-forty athletes from 20 National Paralympic Committees, including Kenya and Kuwait for the first time, attended the final edition of the World Cup, which has been building toward the highly anticipated IPC Shooting European Championships, taking place in place in Alicante, Spain from 18-26 October.

Next up, over 200 athletes from 30 countries are expected to gather at the Club Lucentun for the first major IPC Shooting Championships since London 2012, and ahead of the 2014 World Championships, which will be held in Suhl, Germany.