Stoke Mandeville Stadium recently played host to a full programme of international competition at its facility on Guttmann Road in Aylesbury, Great Britain.

A week long Finnish Wheelchair Rugby Training Camp came to a close with a scintillating match against their GB counterparts in front of a vocal crowd. In an exciting and very close encounter Finland narrowly lost 49 to 52.

Prior to the match the team made use of the first class, specialized training facilities at the centre and spent at least six hours each day within the centre making use of the gym to build on the team’s fitness and the sports halls to work on technique and team play. The players and staff from Finland were pleased with the sporting facilities as well as the purpose built accommodation all within the same location.

Tommi Ojanen, Head Coach of Team Finland Wheelchair Rugby, said: "My players and staff enjoyed a great training week with Team GB at Stoke Mandeville Stadium. During this week we trained and played hard in the start of preparation to European Championships 2011 and qualification to the London Paralympic Games 2012. The closeness of accommodation and sport facilities made it easy to have an effective training week."

Also concluding recently at Stoke Mandeville was the 4 Nations Para-badminton Series 2011 English Championships. A top-quality and exhilarating weekend of competition saw English players winning 23 out of the 25 Gold medals available.

Badminton England Disability Manager Tom Webster was delighted with the weekend’s events and said: “The Championships was a fitting conclusion to the domestic Para-badminton season, at a stunning venue for disability sport. The standard of play was exceptional and I’m sure everyone in attendance was impressed with the skill, athleticism and camaraderie on show.

“The atmosphere of the 4 Nations really is unparalleled. We had a record entry in the physical disability categories and it’s great to see so many new players on show. The game continues to grow, particularly through the hard work of coaches, players and the Inclusive Clubs to grow Para-badminton. The players’ focus will now turn to Dortmund and the German International Para-badminton Open in June, and I’m sure they will all perform with distinction.” 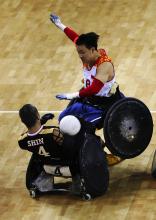 BEIJING - SEPTEMBER 16: Shinichi Shimakawa of Japan is tackled by Cheng Shuangmiao of China during the 7/8 classification match of the Mixed Wheelchair Rugby between China and Japan at Beijing Science and Technology University Gymnasium during day ten of the 2008 Paralympic Games on September 16, 2008 in Beijing, China.