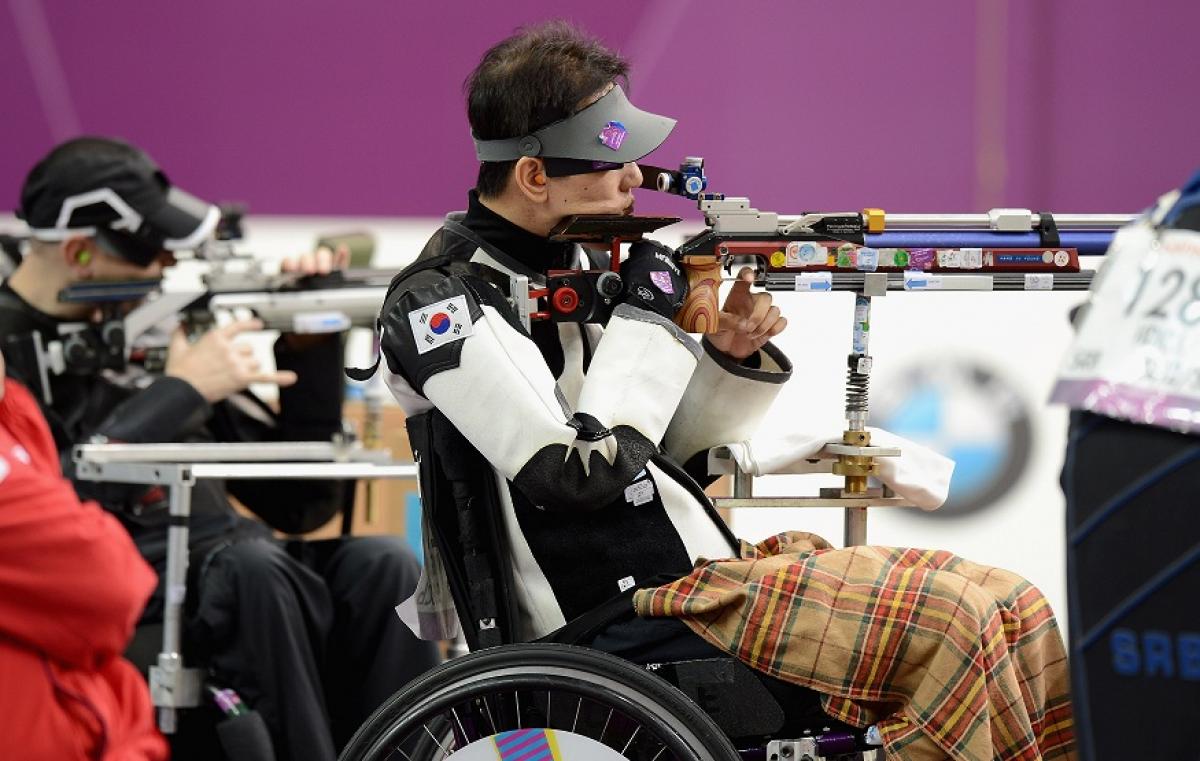 Kang Juyoung is the champion of the R4 mixed 10m Air Rifle standing SH2 competition in the London 2012 Paralympic Games.

“You just have to focus and not let those things bother you. I trusted myself. I knew I had to relax and to do what I had trained for and achieve a medal."

"I'd actually been hoping for a medal on Saturday (1 September), but didn't make the finals (in the mixed 10m air rifle prone SH2) so there was pressure today," Kang said.

"However, I knew I could get a medal if I reached the final and if I had the confidence.

"I am the most severely disabled athlete in my class so when I found out I'd won, I was very emotional."

In qualifying, Kang, Tanguy de la Forest of France and New Zealand’s Michael Johnson each shot a perfect score of 600 to equal the world and Paralympic record.

A battle between Kang and world number one Johnson emerged at the top of the leaderboard as positions changed with regularity below them. Scores of 10.7, 10.8 and the perfect score of 10.9 were common in a high-quality and eagerly contested final.

Johnson hit a 9.8 with his seventh shot to slip to third, while Kang scored 10.8 to establish some breathing space in first place.

Kang went on to win the gold medal with a Paralympic record final score of 705.5, but there was work still to be done below him.

Slovenia’s Tirsek had been quietly climbing up the scores and used most of the allocated 75 seconds to take his final shot. He scored a 10.8 to force a shoot-off with New Zealand’s Johnson to see who would win the silver and bronze medals.

Tirsek shot 10.8 in the shoot-off to win the silver medal, with Johnson winning the bronze medal with a score of 10.3 in the decider.

Tirsek thanked his team after the result.

He said: “I have the best cheerers in the world. The emotions are amazing. It’s actually the success of the whole team because Pintar leant me his gun.”

Of the difficulty using a borrowed gun presented, Tirsek said he had to look beyond it and keep his nerve to force the shoot-off.

“You just have to focus and not let those things bother you. I trusted myself. I knew I had to relax and to do what I had trained for and achieve a medal. It’s my life dream that has come true.”

Tirsek said he would thank Franc Pinter and the team “with a big party”.