Tokyo: Eight months ahead of the Games’ return to Tokyo, the Olympic Stadium’s completion was recognised on Sunday, 15 December, in a ceremony attended by Japanese Prime Minister Shinzo Abe, Tokyo Governor Yuriko Koike, and architect Kengo Kuma; the venue also played host to a media tour.

Images of what is undoubtedly to become an icon of the Games and of the metropolis itself were taken to be shared with the public and stoke excitement across the globe.

Designed by renowned architect Kengo Kuma with a strong emphasis on environmental awareness, the venue will be open to the people of Tokyo in an event to take place on December 21, with a multitude of Japanese cultural displays and a visit by sprinting World Record Holder, Usain Bolt, in celebration.

The Olympic Stadium will host the Emperor's Cup JFA 99th Japan Football Championship on 1 January 2020. This will be the first sport event held in the venue and is also a Tokyo 2020 Test Event for Football.

With a capacity of 68,000, the Olympic Stadium will make a lasting impression on Games spectators and leave them with unforgettable memories. It features a nine-lane track, two giant screens and a cutting-edge Wi-Fi network.

Architecture
Leading architect Kengo Kuma has outdone himself with the design of the Olympic Stadium. Distinctively made of wood and greenery, it will make a lasting impression on the spectators and has the potential to become the most iconic venue of the Tokyo 2020 Games.

This stadium was designed as a collection of pieces of wood that are small in diameter. The facade consists of overlapping, multi-layered eaves made of wood gathered from Japan’s 47 prefectures, and the roof features a truss structure which combines steel beams and laminated lumber.

However, it is inside the stadium where the magic will happen. Spectators will have great views of the athletes from any of the stands, which are bowl-shaped, three-layered and whose inclination gradually becomes steeper. The interior spaces are designed with warm wooden textures and even the athletes’ dressing rooms use laminated wooden materials.

Integration
People often picture Tokyo as a concrete jungle, but the megalopolis boasts many parks, including a large green space with century-old trees downtown known as the Outer Garden of Meiji Jingu Shrine. This will be the home of the Tokyo 2020 Olympic Stadium, in the very heart of the city.

It was crucial for the stadium to perfectly fit with the surrounding nature. So its architect, Kengo Kuma, envisioned this building of wood and greenery which he called a “living tree”.

Wood will be omnipresent. From the plant-covered facade, the large flat roof which is a fusion of cutting-edge technology and master craftsmanship, to the eaves - one of the features of traditional Japanese construction - around the outer perimeter in order to gently blend in the stadium with the green environment.

On the outer part of the top floor, 20 metres above first floor level, a public walkway named the “Grove of the Sky” will be planted with trees and offer fantastic views of Tokyo cityscape. At night, lamps inspired by Japanese traditional stone and paper lanterns will provide the entire stadium with soft light.

In total, more than 47,000 medium and small-sized trees were planted within the stadium’s precinct.

Sustainability
The stadium was designed to have the lowest possible environmental load and it aims to achieve the highest ranking in CASBEE, a Japanese building environmental performance rating index. Moreover, a state-of-the-art energy management system was installed for maximise the energy efficiency.

The environmental load will be reduced by using natural energy. Thin-film photovoltaic cells were integrated on the glass part of the edge of the roof. Rainwater and well water will be collected and used for the irrigation of the grass, plants and trees of the stadium.

Accessibility
Accessible seats will be distributed on all tiers and floors of the stands and will ensure visibility and comfort for wheelchair users. These spaces are designed with enough height difference between the rows of seating to ensure that those in wheelchairs can see clearly, even if spectators in front of them stand up.

Furthermore, accessible seats and seats for an accompanying person will be placed next to each other without being separated, and electric outlets are available so that electric wheelchairs can be recharged during events. A sufficient number of universally designed toilets have also been installed.

Furthermore, Human Support Robots and Delivery Support Robots will provide assistance to spectators in wheelchairs at the Olympic Stadium by carrying food and other goods, guiding people to their seats, and providing event information. Developed by Toyota Motor Corporation, they will allow all spectators to enjoy watching the Tokyo 2020 Games in greater comfort.

Transport
The walking distance from the Olympic stadium to no less than six trains stations served by five different train and subway lines is less than one kilometre.

Heat Countermeasures
Natural winds channelled into the stadium from the eaves and terraces circulate airflow and discharge heat and moisture generated from the field and spectators, which improves the
thermal environment of the spectators’ seats and the field.
In addition to this naturally assisted measure, 185 airflow-creating fans and a mist-cooling system are installed to cool the spectators and athletes.

Construction & Budget
The stadium’s construction began on 1 December 2016 and was completed on 30 November 2019 with a total of more than 1.5 million people involved in the various stages of the process and a peak of 2,800 people per day.

The total cost of its construction amounted to 156.9 billion yen, under the planned 159-billion-yen budget.
“We are very pleased that construction of the Olympic Stadium – a key symbol of the Tokyo 2020 Games – has now been completed; it makes us realise just how close we are getting to the start of the Games. We appreciate the support of everyone involved in its construction, including the national government, the Japan Sport Council and so many others.

“The original National Stadium was used as the main stadium for the Olympic Games Tokyo 1964, and for half a century was the scene of numerous historic sporting moments in Japan. It also became a legacy of those Games, a commanding presence in the centre of Tokyo where many people would come together every week to enjoy a wide variety of events.

“We are so looking forward to seeing athletes from all over the world marching into the new stadium at the Opening Ceremony of the Olympic Games on 24 July 2020 and the Paralympic Games on 25 August 2020, when the eyes of the world will be on this iconic symbol of the Tokyo 2020 Games.

“We believe the stadium will become an irreplaceable legacy – a place that will allow people to spend healthy and fulfilling days enjoying sport for another fifty years or even longer. With this in mind, we will continue our preparations for hosting the best Games ever.” 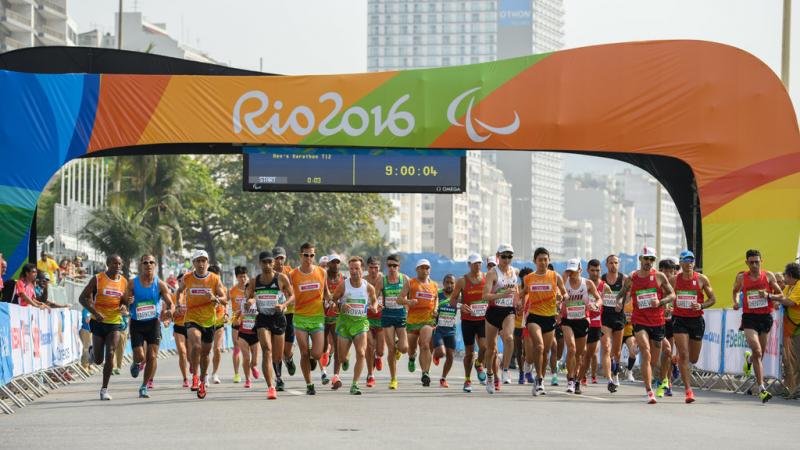