All you need to know to follow the action at the Tokyo Aquatics Centre on day five, 29 August at the Paralympic Games 14 Aug 2021
Imagen 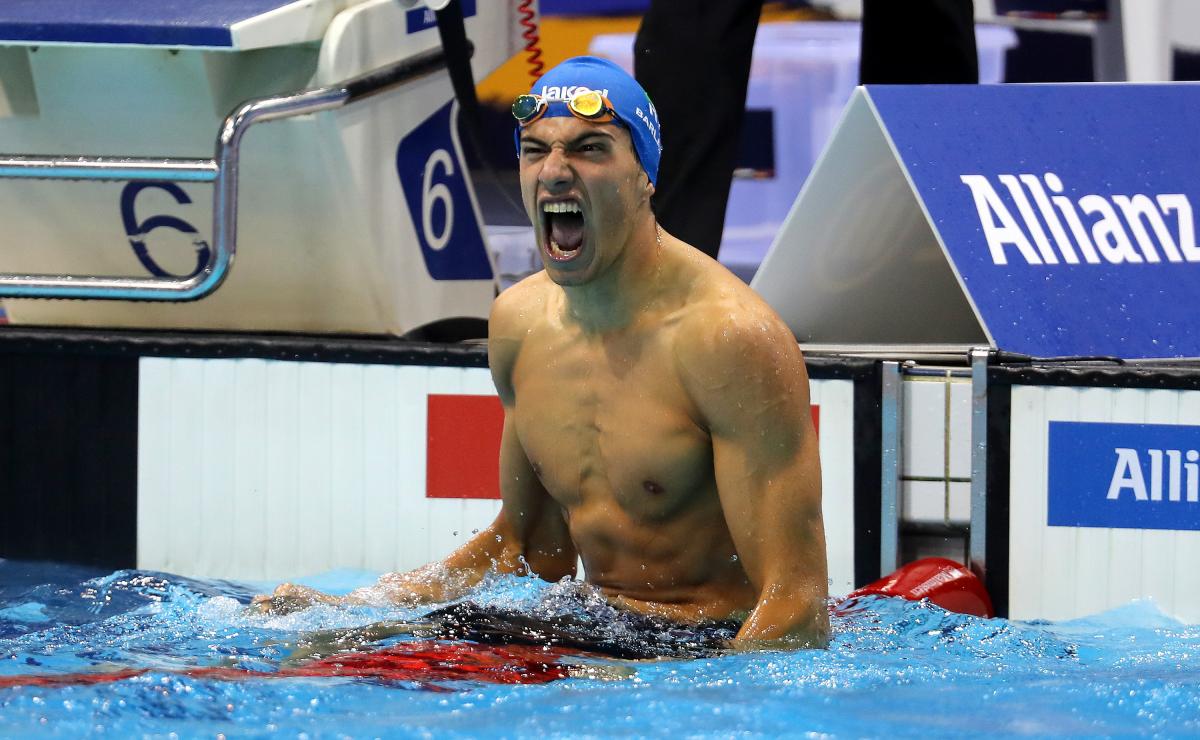 The action in the Tokyo Aquatics Centre will be almost at the halfway point on 29 August, day five of the Para swimming programme at the Tokyo 2020 Paralympic Games.

The first set of medallists on Sunday will be decided in the men’s 400m freestyle S7. Israel’s Mark Malyar is the world record holder and the reigning world champion in the event. He is the fastest man in 2021, but only managed to win a bronze medal at the Madeira 2020 European Championships in May.

Andrii Trusov from Ukraine snatched the gold medal in Madeira but fell short at the London 2019 World Championships where he had to settle for a silver medal behind Malyar. The 21-year-old is the fourth-fastest this year in the event.

Inaki Basiloff from Argentina set the second-best time in 2021 at the World Series in Berlin in June, while USA’s Evan Austin lies in third place after his performance at the Lewisville World Series in April.

McKenzie Coan from the USA is the favourite to win a gold medal in the women’s 400m freestyle S7. She is the reigning Paralympic champion from Rio 2016 and back-to-back world champion from Mexico City 2017 and London 2019.

The 25-year-old from Clarkesville set the fastest time of the year at the US National Trials in Minneapolis. Italy’s Giulia Terzi is the second-fastest woman in the event with a time set in Naples in July.

Germany’s Denise Grahl is also coming to Tokyo in fine form in recent years. She enjoyed success in May becoming the European champion in Madeira.

Freestyle events will be followed by two breaststroke finals. Japan will be hoping for a gold medal in the men’s 100m breaststroke SB14. Naohide Yamaguchi is the world record holder, the fastest man in 2021, and world champion from London two years ago.

His closest rival in Tokyo will be Australia’s Jake Michel, the second-fastest Para swimmer in 2021 setting his season-best in Adelaide in June.

The 30-year-old Dutch Para swimmer Marc Evers won two bronze medals at the London 2012 and Rio 2016 Games. He has two world and two European titles to his collection. Although he is the seventh-fastest man in 2021, Evers’ experience can make the difference at the Tokyo Aquatics Centre.

Brazil’s Gabriel Bandeira is the last, but not the least Para swimmer to be highlighted in the men’s 100m breaststroke SB14. He is the Americas record holder, fourth-fastest man this year, and gold medallist from the European Open Championships in Madeira.

Spain’s Michelle Alonso Morales is undoubtedly the favourite for gold in the women’s 100m breaststroke SB14. The 27-year-old born in Tenerife is the world record holder and the fastest woman in the event in 2021. She won two Paralympic gold, four World Championships medals (including two golds), as well as four European Championships medals.

Great Britain’s Louise Fiddes will be Alonso’s main rival in Tokyo. She is the reigning world champion and Dublin 2018 European champion.

The 21-year-old Australian Paige Leonhardt is the second-fastest Para swimmer in the event this year. She set her best time in Gold Coast in April.

Paralympic champion @MichelleAlonsoM got the gold and lowered her Paralympic record for the 2nd time in one day in the women’s 100m breaststroke SB14. @Paralimpicos #WaitForTheGreats #Tokyo2020 pic.twitter.com/fvjz56R4Gv

Another freestyle event will follow after the breaststroke action in Tokyo is the men’s 50m freestyle S9. Italy’s Simone Barlaam will seek a gold medal on his Paralympic debut. His name has become a synonym for the event in recent years. The 21-year-old from Milano is the world record holder, the fastest man in 2021, and back-to-back world and European champion.

Timothy Disken from Australia will be one of Barlaam’s biggest threats as the silver medallist from the Rio 2016 Paralympics. RPC’s Denis Tarasov is another one to watch out for as he set the second-fastest time this year in May - although over a second slower than Barlaam’s best time.

The Refugee Paralympic Team (RPT) will also be represented in the event. Ibrahim Al Hussein is going to compete at his second Paralympic Games after being the RPT flagbearer at Rio 2016. He gained experience over the last five years competing at two World Championships and as many European Championships.

Paraguay and Saint Vincent and the Grenadines will also have their representatives in the men’s 50m freestyle S9. Rodrigo Hermosa and Dexroy Creese will compete as the first Para swimmers ever for their respective countries at the Paralympics.

Mexican swimmers will try to make the nation proud in the men’s 50m backstroke S3. Diego Lopez Diaz is the world champion from Mexico City 2017 and London 2019. He is also the fastest man in 2021.

His compatriot Jesus Hernandez is the second-fastest Para swimmer this year after putting up a great performance at the Berlin World Series in June.

Ukraine’s Denys Ostapchenko enjoyed recent success as the reigning European champion from Madeira where he set the third-best time of the year. He is followed by Italy’s Vincenzo Boni who has a bronze medal from the Rio 2016 Paralympics, as well as two World Championships and three European Championships medals.

USA’s Leanne Smith leads the way in the women’s 50m backstroke S3. She is the fastest Para swimmer this year, but with only one international medal to her name from the London 2019 World Championships. She had to settle for silver behind Brazil’s Edenia Garcia.

The 34-year-old Garcia is the reigning Parapan American Games champion and the silver medallist from Mexico City 2017 Worlds. Her form is unsteady in 2021 with the seventh-fastest time in the event.

Great Britain’s Ellie Challis follows Leanne Smith in this year’s rankings with a time set at the competition in Manchester in February. RPC’s Iuliia Shishova is another Para swimmer in great form. She won the European in May setting the third-fastest time in 2021.

“I want every refugee to have opportunities in sport. I can stop eating, but I cannot stop having sport in my life. It is what keeps me going.”

Get to know Ibrahim Al Hussein, who has endured a difficult but hopeful journey to @Tokyo2020. #Paralympics | #Tokyo2020 pic.twitter.com/H2jR9f3Dcx

The action will continue in the Tokyo Aquatics Centre with men’s and women’s 50m freestyle S13.

Ihar Boki from Belarus will compete in his fourth event in five days looking for another medal around his neck. The 27-year-old Paralympic legend is the world record holder and two-time Paralympic champion in the race. He is also the four-time world and European champion, as well as the fastest man in the event in 2021.

The competition is set to be tighter in the women’s 50m freestyle S13. Italy’s Carlotta Gilli is the world record holder, back-to-back world champion, and a European champion from Dublin 2018.

In May this year, she had to settle for a silver medal at the Euros in Madeira. RPC’s Anna Krivshina took gold with the second-best time of the year.

Another Gilli’s rival for gold in Tokyo comes from Australia. It is the 20-year-old Katja Dedekind who set the fastest time in 2021 at the National Trials in Adelaide in June.

Ukraine’s Paralympic champion Anna Stetsenko should not be written off. Between 2017 and 2021 Stetsenko won one World Championships and two European Championships medals in the event.

The last two breaststroke events of the day will come at a 100m distance in the SB4 class for both male and female Para swimmers. Colombia’s Moises Fuentes is the fastest man in 2021 setting his best time at the Lignano Sabbiadoro World Series in April.

The 47-year-old veteran enjoyed lots of international success in recent years. He won one silver and two bronze Paralympic medals in the event, became world champion in Montreal 2013, and added three more Worlds medals along the way.

Antonios Tsapatakis from Greece follows Fuentes in the rankings as the second-fastest Para swimmer this year. He set his time at the Berlin World Series in June.

London 2019 world champion Dmitrii Cherniaev of RPC has had a successful 2021 in the men’s 100m breaststroke SB4 following his gold at the Europeans in Madeira in May.

Italy’s Francesco Bocciardo made it to the podium on both events. He was second at Madeira 2020 and third at London 2019, adding to his Dublin 2018 European title.

Hungary’s Fanni Illes is the main favourite for gold in the women’s 100m breaststroke SB4. She finished first in the race at the London 2019 Worlds, Dublin 2018 and Madeira 2020 Euros. She also set the fastest time in 2021.

Illes is followed by Italy’s Giulia Ghiretti in the rankings. She is the Paralympic silver medallist from Rio 2016 and Mexico City 2017 world champion.

Her compatriot Monica Boggioni is another candidate to win a medal in Tokyo. The 23-year-old from Pavia won a bronze at the Dublin 2018 and Madeira 2020 Euros. She set the fourth-fastest time in the world this year at the Euros in May.

"Para Swimming helped me to accept myself and I believe it can help other people to accept themselves too."

The last individual event of the day will be the men’s 200m freestyle S2. Chile’s Alberto Abarza leads the way as the reigning Parapan American Games champion and the silver medallist from the London 2019 Worlds. He won bronze at the Mexico City 2017 World Championships and enjoyed recent success at the European Open Championships in Madeira winning a gold medal.

His main threats on the way to a first Paralympics gold will be two Brazilian swimmers, Gabriel dos Santos Araujo, and Bruno Becker da Silva. They have both set great times at the National Trials in Sao Paulo in June.

Araujo is the fastest Para swimmer this year, while Becker holds third place behind Abarza.

The women's 4x100m freestyle relay 34 pts will close the curtain on day five at the Tokyo Aquatics Centre. The main battle is expected between the reigning Paralympic champion and world record holder Australian team against Great Britain, the current world champion from London 2019.