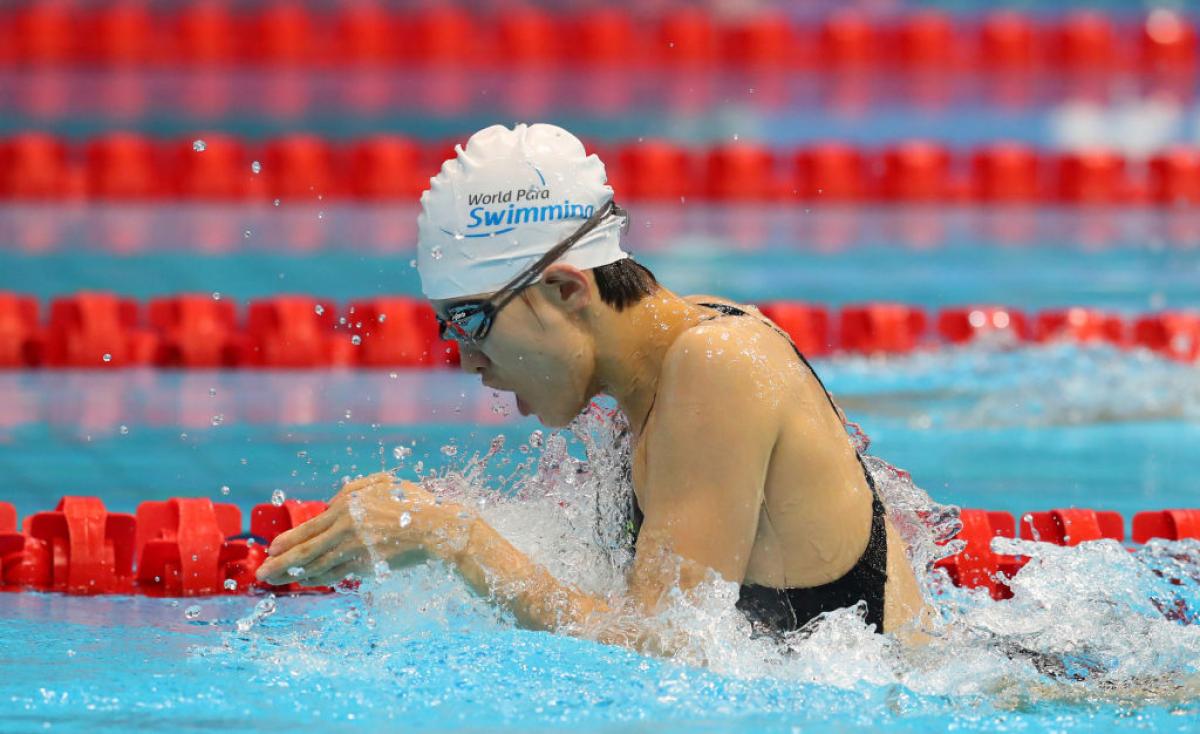 The first day of the new month will see 15 medal events in the eight day of competition at the Tokyo Aquatics Centre on 1 September.

Colombia will have high expectations for Wednesday's opening race as Carlos Serrano will be defending his Rio 2016 Paralympic title in the men's 100m breaststroke SB7. He is also also the current world champion and the fastest in the event this season.

RPC’s Egor Efrosinin will be Zarate’s main rival in Tokyo as the reigning European champion from Madeira 2020 and the third-fastest man this year. He finished second at the London 2019 World Championships behind Serrano.

She is the second-fastest this year behind New Zealand’s Nikita Howarth. Thomas-Kane appears in third in the 2021 rankings.

Happy Birthday to one of the most decorated Paralympians of all time, @JessicaLong ! 🥇🇺🇸#ParaSwimming @Paralympics @TeamUSA pic.twitter.com/qGVLMkCssY

Next up will be the men’s 100m freestyle S6 in which Italy’s Antonio Fantin is the fastest man in 2021. The former water polo player set his season-best time at the European Championships in Madeira where he also broke the world record.

To win his first Paralympic gold Fantin will have to beat Cuban legend Lorenzo Perez Escalona, the defending champion. His Rio 2016 gold was the first for Cuba in Para swimming at the Paralympic Games.

Thijs van Hofweegen from the Netherlands and Ukraine’s Oleksandr Komarov are second and third in the world rankings this year. Lima 2019 Parapan American Games champion Nelson Crispin from Colombia has the fourth-fastest time this year.

Two more freestyle events will come up next at the Tokyo Aquatics Centre. First is the men’s 400m freestyle S10 final with Ukraine’s Maksym Krypak targeting another first place.

He is the defending Paralympic champion and world record holder. Also on Krypak's CV are the London 2019 World Championships and the Madeira 2020 European Championships gold.

Dutch Para swimmer Bas Takken and Italy's Stefano Raimondi have not been successful in their recent attempts to beat Krypak finishing second at the London 2019 Worlds and Madeira 2020 Euros, respectively.

Canada's Aurelie Rivard will be targeting her second consecutive Paralympic gold in the women's 400m freestyle S10. The 25-year-old from Quebec is the world record holder and is likely to face fierce competition from Poland’s Oliwia Jablonska and Hungary’s Bianka Pap.

Pap is the reigning European champion from Madeira and the fastest woman in the event this year. She is followed by Jablonska who won a silver medal at the Euros. The Polish swimmer won back-to-back world titles in 2017 and 2019.

🌌 -Universe: What about breaking a WR during the Heats? 🤔
🇮🇹 -Antonio Fantin: Why not? 😎

The second set of breaststroke events will follow on day eight with China’s world record holder Yang Bozun leading the way in the men’s 100m breaststroke SB11. He is a two-time Paralympic champion and the London 2019 world champion.

Japan’s Keiichi Kimura is a two-time Paralympic and four-time World Championships medallist who will be in search of his first gold in the event. He has the second-best time of the year behind Dutch swimmer Rogier Dorsman.

The women’s 100m breaststroke SB11 is also dominated by a Chinese swimmer. Her name is Jia Ma and she is the reigning world champion and world record holder. The vision-impaired athlete is also the fastest in 2021 setting her time at the Berlin World Cup in June.

Liesette Bruinsma from the Netherlands and Ukraine’s Yana Berezhna are second and third in the world rankings this year. Bruinsma is the Rio 2016 Paralympics and London 2019 Worlds silver medallist, while Berezhna holds the European title from Madeira in May.

“I still have a lot of room for improvement. The postponement would give me the time to squarely tackle the sport, and to think about other things too.”

The two individual medley events on 1 September will be the men's and women's 200m SM9. Italy’s Federico Morlacchi is the reigning Paralympic and two-time world champion in the male event, although without a gold medal since the Dublin 2018 Euros.

French Para swimmer Ugo Didier triumphed at the Madeira 2020 European Championships, while the RPC’s Andrei Kalina took gold at the London 2019 Worlds. Australia’s Timothy Hodge has the best time of the year.

New Zealand and Sophie Pascoe will be hoping for more gold in the women’s 200m SM9. The world record holder and five-time Paralympic medallist will be facing the likes of newly crowned European champion Zsofia Konkoly from Hungary, alongside Spain's Nuria Marques and Sarai Gascon.

Fantastic effort by 🇪🇸's @o_nuriamarques to take 🥇in the 200m IM SM9 and chase down by @britishswimming Toni Shaw who takes 🥈#Dublin2018 pic.twitter.com/EoTtXTWB68

There will be more breaststroke finals in the SB13 class with the men's and women's 100m. This will be a rare case in which Belarus' Ihar Boki comes to a race without being the favourite for gold. Uzbekistan’s Firdavsbek Musabekov is the defending Paralympic champion and London 2019 Worlds silver medallist.

Germany's 19-year-old Taliso Engel is the current world champion and took European gold in Madeira in May both times ahead of Boki.

Another German will be going for gold in the women's 100m breaststroke SB13. Elena Krawzow is the fastest in the race this year and the overall World Series winner.

She will be battling for the top of the podium against London 2019 world champion Rebecca Redfern from Great Britain and USA's Coleen Young - silver and bronze from Rio 2016.

The men’s 50m freestyle S5 is set to be the highlight of day eight with Paralympic legend Daniel Dias making his final appearance in the Games before his retirement. He is a two-time Paralympic champion and five-time World Championships gold medallist in the event.

His main rivals in the Tokyo Aquatics Centre will be Chinese swimmers Weiyi Yuan and Tao Zheng, first and second in the world rankings this year. They have both set their season-best results at the Berlin World Cup two months ago.

Dias himself set the third-fastest time this year at the National Trials in June with Italy’s Francesco Bocciardo following in fourth place. Italian Para swimmer is the back-to-back European champion and silver medallist from the Worlds in London in 2019.

Next will be the women's 50m freestyle S8. RPC’s Viktoriia Ishchiulova is the reigning European champion and the fastest woman in the event this year.

Alejandra Aybar on a journey to make her coach and her country proud! 🇩🇴🏊🏻‍♀️

She was the first person from Dominican Republic to qualify for the Parapan American Games and hopes this will be repeated at @Tokyo2020.

Day eight will conclude with the men's and women's 100m breaststroke SB12. Ukraine’s Oleksii Fedyna is the reigning world champion and the world record holder but he lost the European title to Azerbaijan’s Vali Israfilov in May.

Uladzimir Izotau from Belarus is another one to watch as the defending Paralympic champion, five-time World Championships, and four-time European Championships medallist.

Brazil’s Maria Gomes Santiago is the fastest woman this year in the women’s 100m breaststroke SB12. She set her best time at the National Trials in June in Sao Paulo. 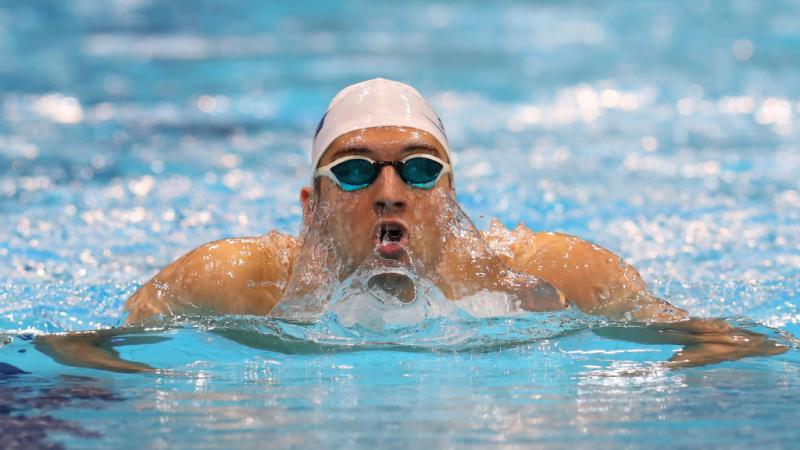