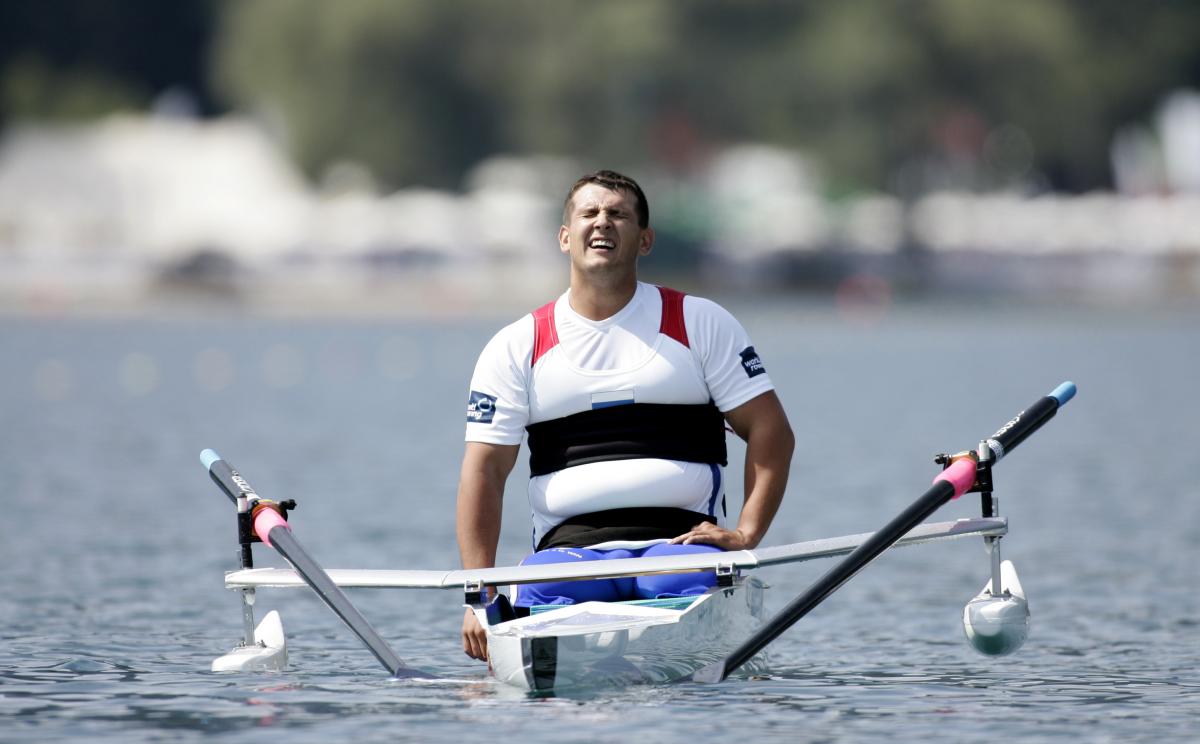 Alexey Chuvashev of Russia winning the silver medal in the Final A of the AS Men's Single Sculls at the 2011 World Rowing Championships in Bled, Slovenia.

"I have trained hard (for it). Rowing means a lot in my life."

A number of best times were shattered on the first day of rowing at Eton Dorney on Friday (31 August), as China’s Cheng Huang and Russia’s Aleksey Chuvashev broke the world-best time previously set by Great Britain’s Tom Aggar in the men’s single sculls ASM1x.

Huang made an excellent start and despite slowing in the final stages, still finished in 4:45.02. Although Chuvashev will have to go into the repechage on Saturday, he will be encouraged with his time of 4:46.99. Both times beat Aggar’s previous world best time of 4:49.80, set at the 2010 world championships.

"I have trained hard (for it). Rowing means a lot in my life," Huang said. "I am happy to compete in my first Paralympics."

Aggar, the favourite, looked comfortable, qualifying for the next round with a time of 4:56.65.

"It went to plan. I went out hard in the first half and could cruise to the finish," Aggar said. "I am not fazed by the conditions. Choppy waters can be difficult but everyone is in the same boat."

With only the winner of each race qualifying directly for the final on Sunday, athletes rowed hard in the heats to avoid going into the repechage on Saturday.

Belarus’ Liudmila Vauchok booked her place in Sunday's women’s single sculls ASM1x final by winning the first race of the day. Vauchok trailed Brazil’s Claudia Santos in the early stages of the race, but took the lead just after the 500m mark and never looked like relinquishing it. She finished in 5:40:21.

The field in Heat 2 of the event was full of world championship medallists and it was two-time world champion Alla Lysenko of Ukraine who powered her way to victory. The Ukrainian is favourite for gold at London 2012 and showed why with a blistering performance, finishing almost 10 seconds ahead of 2010 world champion Nathalie Benoit of France with a time of 5:29.99, the fastest time in Paralympic history.