It was China’s turn to dominate on day two of wheelchair fencing as they captured three of the four available epee gold medals. 13 Sep 2016 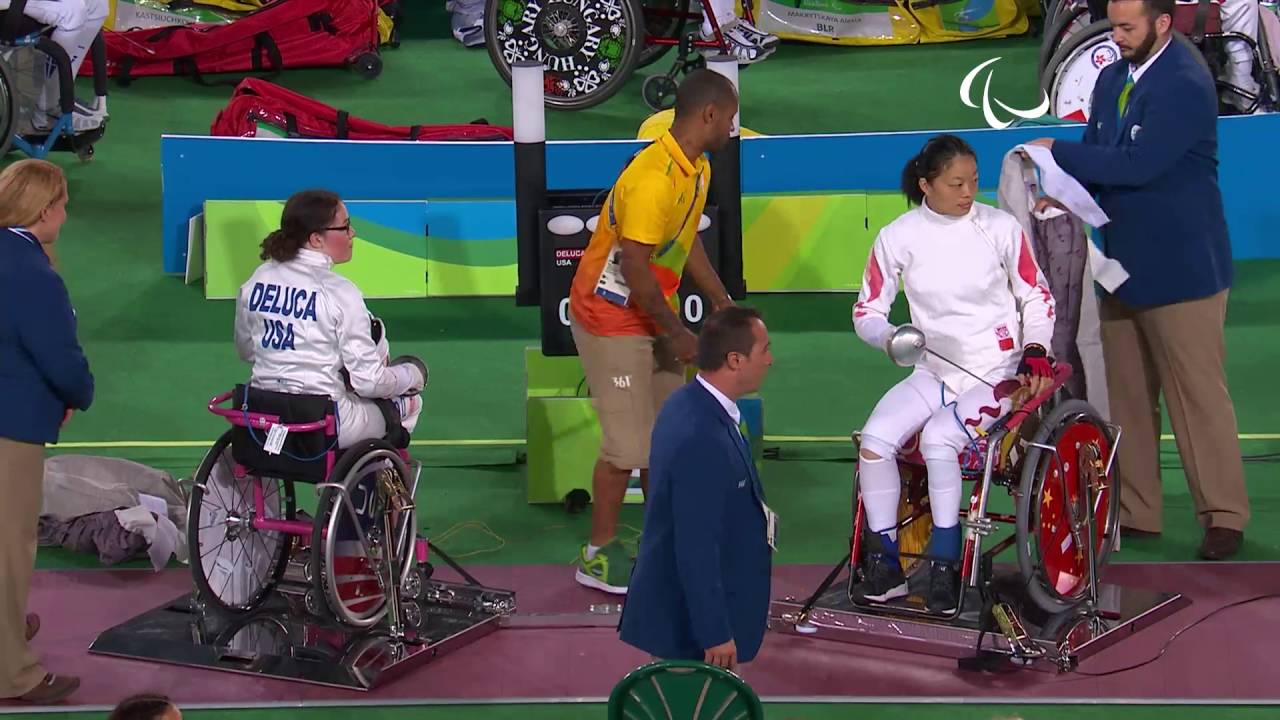 China’s wheelchair fencers declared their dominance with the epee on Tuesday (13 September), topping the podium in three of the four events.

It was an all-Chinese contest in the final of the women’s epee category A event as world champion Xufeng Zou faced off against teammate Jing Bian.

The matchup was a repeat of the Asian Games final from which Bian had emerged victorious. The tables were turned in Carioca Arena 3, however, as Zou fenced fiercely to win 15-11.

According to Bian, facing one of her teammates did not affect her fencing.

“Everyone’s an opponent on the fencing piste,” Bian explained.

“It’s not really more difficult, because in the end it is all about how I perform personally; everyone here is so good so there’s no difference being up against a teammate or whoever else.”

After failing to make the finals in the event, Hong Kong’s Chui Yee Yu will have to wait until at least Wednesday (14 September) to equal the record for the most Paralympic medals won by a female fencer. Yu needs just one medal to equal the 10-medal record, but was eliminated at the preliminary stage in the epee competition. Yu competes again in the individual foil event on Wednesday.

There was another gold for China in the in the women’s epee category B final.

“I attacked more than her using a strategy based on the fact that she’s taller than me. I’m short but this is not a disadvantage: I could attack more because of that.”

China’s third Paralympic title of the day came in the men’s epee category A competition with victory for Gang Sun over Great Britain’s World No.1 Piers Gilliver. Sun had beaten Gilliver by just a point in the final of the 2015 World Championships in Budapest, Hungary in September and it was to be close again as Sun triumphed 15-13.

Speaking afterwards, Paralympic debutant Gilliver was not too downhearted.

“He (Sun) is definitely a tough competitor, he’s really so fast, so competitive, winning gold all the time, so I knew it was going to be tough.

“Obviously I really wanted the gold, but he was the better athlete on the day. But then, coming off, the thought of getting a Paralympic medal at all is just a real dream.”

Despite support from the Carioca crowd, Brazil’s London 2012 gold medallist Jovane Silva Guissone was another London 2012 winner forced to relinquish his crown, losing in the quarter final.

The title went instead to Belarus’s World No.1 Andrei Pranevich in the men’s epee category B . Pranevich beat Iraq’s world champion Ammar Ali by the narrowest of margins in the final, taking the title 15-14 after a tense exchange.