Australia and the USA among the leading contenders in one of London’s most exciting events. 04 Sep 2012

Ones to watch: Australia, USA

Fans travelling to the Basketball Arena look set to witness some thrilling wheelchair rugby action as eight teams battle it out for gold medal glory.

Fans travelling to the Basketball Arena look set to witness some thrilling wheelchair rugby action as eight teams battle it out for gold medal glory.

Hosts Great Britain will get the tournament started when they take on USA in the opening match.

Australia, Canada, Sweden, France, Japan and Belgium will also be involved in the eight-team competition, although USA will start as firm favourites.

They have finished first at every world championships and Paralympic Games since 2006, having lost only two games since James Gumbert became coach in 2005, but the British will look to cause an upset in the early stages with the home crowd on their side.

Veteran Will Groulx, who dominated the competition at the Beijing 2008 Paralympic Games, will once again lead America’s charge along with strong ball-handler Chuck Aoki.

Groulx has been playing Wheelchair Rugby since 2001, when he was medically discharged from the U.S. Navy after suffering a spinal-cord injury.

“The level of play in all the countries has really got better, so legitimately every team that’s here has an opportunity to be on the podium,” said Groulx.

“We all have to show up ready to play every game in order to have success. Some of the strong teams that are out here are Australia, Canada, Japan and the home team Great Britain has a great shot as well. It’s going to be an interesting tournament to watch.”

Wheelchair rugby was originally invented in Canada, and is still affectionately known as ‘Murderball’ due to its high-speed, all-action style.

“The chair absorbs a lot of the impact, but you still get hit around. It's as tough as you want it to be. If it's too tough, don't play!

“It's like dodgems or bumper cars, where I'll literally go and smash a pathway for my team-mates to follow me through.”

Australia, silver medallists at the Beijing 2008 Paralympic Games, will be confident of doing well, along with Canada, who has claimed medals in the last two Paralympic Games.

Four-time Paralympian Greg Smith, 45, has been named as Australia’s flag bearer in the Opening Ceremony.

“I’m expecting that this is going to be the most competitive closest-fought competition that we’ve had at a Paralympic Games,” said Eron Main, Secretary General International Wheelchair Rugby Federation.

USA faces off against Australia in Beijing. 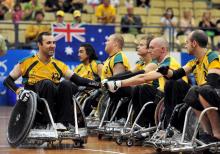