Shooting is the ultimate test of accuracy and control and in shooting Para sport events, athletes with physical impairments compete in rifle, pistol and trap events.

Shooting Para Sport has featured at every Paralympic Games since 1976 and is today practised in more than 75 countries.

In this precision sport, athletes use focus and controlled breathing to reduce their heart rates and improve stability and high performance. This ability to steady hand and mind to deliver a sequence of shots requires well-developed powers of concentration and emotional control.

Athletes compete in events from distances of 10m, 25m and 50m in men’s, women’s and mixed competition events.

The sport is governed by the IPC and co-ordinated by the World Shooting Para Sport Technical Committee and Management team.

The sport follows rules of the International Shooting Sport Federation (ISSF) in conjunction with its own World Shooting Para Sport Technical Rules and Regulations, which take into account considerations for Para athletes in shooting sport.

In 2010 the IPC and the ISSF signed a Memorandum of Understanding to cooperate and work together in developing shooting sport; the agreement covers several areas including management, promotion of competitions and events, knowledge exchange, and education of technical officials. 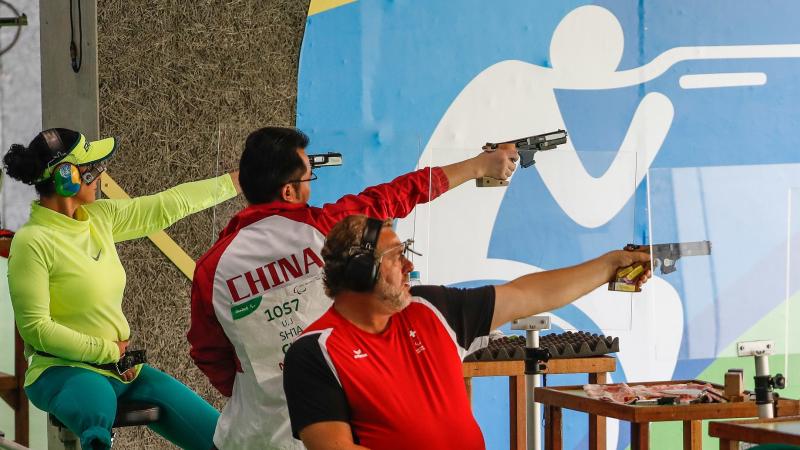 The competition format is very similar to that of able-bodied shooting sport - the goal of shooting is to place a series of shots inside the centre ring (‘bullseye’) of the target. The target is comprised of 10 concentric scoring rings with a score grade of 1 to 10; the central ring giving 10 points.

In many events - to showcase the athletes' skill and accuracy - the scoring rings are each further subdivided into a further 10 scoring zones to give decimal scoring system, with 10.9 being the very centre of the target and the highest possible score per shot. To give you an idea of the level of the accuracy required, in air rifle events athletes fire at a bulls-eye which is only 0.05cm wide - which is as big as a full-stop on a printed page!

The rules (including the number of shots and the time limit) depend on the firearm (.177 air or .22 smallbore calibre), the distance, the target, or the shooting position.

The top eight athletes in the qualification round qualify for the final, however qualification scores are not carried over into the final, meaning each finalist starts from zero. In an exciting test of nerves, skill and focus, athletes with the lowest scores are eliminated over the course of a final, until a duel between the two remaining athletes for gold and silver medals ensues.

GROWTH OF SHOOTING AT THE PARALYMPIC GAMES