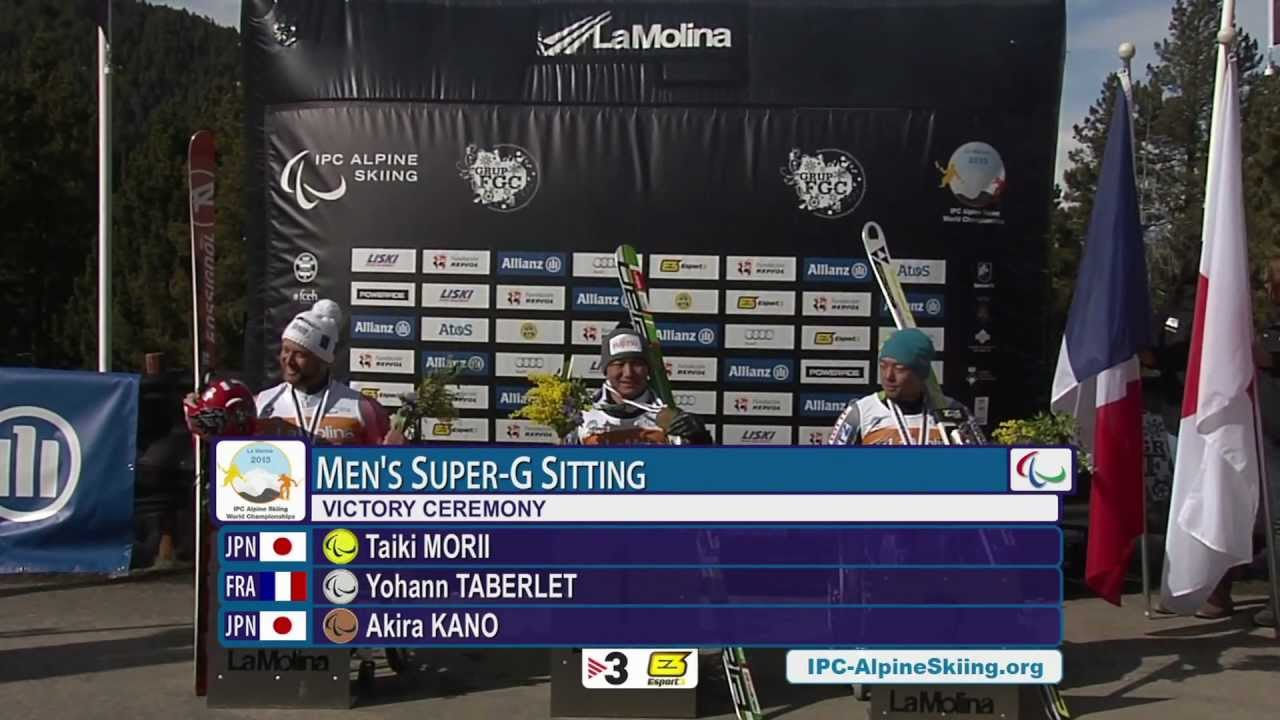 After winning gold in Wednesday’s (20 February) downhill, France’s Marie Bochet, Spain’s Jon Santacana and Austria’s Markus Salcher all struck gold again on the second day of the 2013 IPC Alpine Skiing World Championships in La Molina, Spain, this time with victories in the super-G.

Bochet, who is just 19 years old and won super-G silver at the 2011 World Championships in Sestriere, Italy stormed to victory in 1:18.94 in the women’s standing class which saw all three medallists from Wednesday finish on the podium. Silver went to Bochet’s teammate and defending champion Solene Jambaque who finished in 1:19.29, whilst bronze went to Germany’s Andrea Rothfuss in 1:19.75.

Meanwhile Spain’s Jon Santacana and his guide Miguel Galindo Garces maintained their 100 per cent record in La Molina by following up downhill gold with a successful defence of their wold title in the men’s visually impaired class. Santacana’s time of 1:10.49 placed him ahead of Canada’s Chris Williamson (guide Robin Femy) who took his second successive World Championship silver in super-G (1:11.85). Bronze was won by Switzerland’s Hugo Thomas (guide Luana Bergamin) in 1:12.78.

Austria’s Salcher also remains undefeated after he put in a sensational run to take gold in the men’s standing class. The 21 year old, who is ranked first in the IPC Alpine Skiing world rankings, took his second gold of the Championships with an impressive time of 1:12.49.

Speaking to www.paralympic.org after winning gold Salcher said: “After my gold medal yesterday I was feeling easy going so it went really well.

“The middle part of the race was the most challenging part of the slope as there are three or four gates where you just have to make your skis run. I had a good run so I was confident of winning a medal.”

Three other super-G events took place on the second day of the 2013 IPC Alpine Skiing World Championships. The first race of the day threw up a big surprise when Slovakia’s Henrieta Farkasova, who was targeting five world titles, finished outside the medals in the visually impaired class.

Alexandra Frantseva, together with her guide Pavel Zabotin, claimed Russia’s first gold of the event (1:18.20) with an impressive run whilst two British athletes also made the podium.

After taking bronze in yesterday’s downhill, Kelly Gallagher (guide Charlotte Evans) took silver in 1:21.30 with her teammate Jade Etherington, who only had two practice runs with new guide John Clark before the race, taking bronze in 1:21.58.

Gallagher was delighted to secure her second medal of the Championships. She said: “You always hope you can medal and out here we’re just focussing on doing our best – me doing my best and Charlotte doing her best.

“It’s tough competition with Frantseva and Farkasova so I’m delighted to take silver to add to yesterday’s bronze. To take gold at some point would be a dream come true."

“I’m delighted for my teammate Jade too in taking bronze. She’s had a difficult season and did really well today.

“This is great for British skiing as we’re all working really hard with the goal of next year’s Paralympic Winter Games in Sochi in mind.”

Austria’s Claudia Loesch made up for the disappointment of finishing outside the medals in Wednesday’s downhill by taking a stunning gold in the women’s sitting class. Her time of 1:18.86 was well ahead of Germany’s Anna Schaffelhuber in silver (1:22.65) and USA’s downhill world champion Laurie Stephens (1:23.33).

The final event of the day was the men’s sitting class which, like Wednesday’s downhill, was an absolute thriller with the lead changing hands on multiple occasions. Just 0.2 seconds separated the three medallists.

Japan’s Taiki Morii, a super-G silver medallist in Vancouver and Sestriere, finally got his hands on gold with a run of 1:13.49. Just 0.01 seconds behind was France’s Yohann Taberlet (1:13.50) in silver, whilst Morii’s teammate, the 26 year old Paralympic champion Akira Kano, took bronze (1:13.69).

After the second day of competition and 12 medal events, Austria lead the medals table with five medals including three golds.

The 2013 IPC Alpine Skiing World Championships in La Molina, Spain will run through to 27 February. Friday will be a rest day for all competitors and competition will resume on Saturday (23 February) with the slalom events.