In the last major gathering of international track and field stars before London 2012, athletes did not disappoint at the 2011 IPC Athletics World Championships smashing 57 World and 173 Championship records.

More than 1,000 athletes from 75 countries descended on Christchurch, New Zealand and beforehand some had feared a January Championships would not bring the best out of the athletes. They were soon proven wrong as records began to tumble as soon as the second race and continued to fall right through until the marathon on the final day of competition.

In a colourful Opening Ceremony held in the city’s Cathedral Square New Zealand’s Prime Minister the Rt. Hon John Key officially opened the event, whilst IPC Vice President Greg Hartung predicted that athletes would set the bar for what can be expected at London 2012.

For many the race of the Championships was the Men’s 100m T44 race which saw all seven sprinters cross the line in under 12 seconds and just 0.09 seconds separate the top four finishers.

Despite a hugely successful nine days at the QEII Stadium, the last day of the Championships saw two teams withdraw from the Marathon event due to safety concerns after it was revealed no roads would be closed for the race.

The IPC has since written to all athletes involved in the race to apologize for the problems. A full review of what went wrong is currently being undertaken by the IPC in conjunction with the Local Organizing Committee to ensure such problems never occur again.

Those racers that did compete though provided a fitting finale to a memorable 10 days of Athletics competition. Spain’s Alberto Suarez set a new World record of 2:28:10 in the Men’s T12 for visually impaired athletes whilst the T54 men’s and women’s races were absolute thrillers with photo finishes having to be needed for both races.

Overall, China topped the medal table with 58 medals however it was Brazil’s improvement that most caught the eye. After finishing in 17th place at the last World Championships in 2006, Brazil finished third in Christchurch and were rewarded with a reception hosted by new Brazilian President Dilma Rousseff upon their arrival back home. 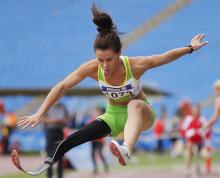