Canada’s Adam Dixon to let his defence do the talking

While many are familiar with the Canadian ice sledge hockey team’s top goal scorers, Adam Dixon is secretly holding the team’s defence together. 28 Feb 2014
Imagen 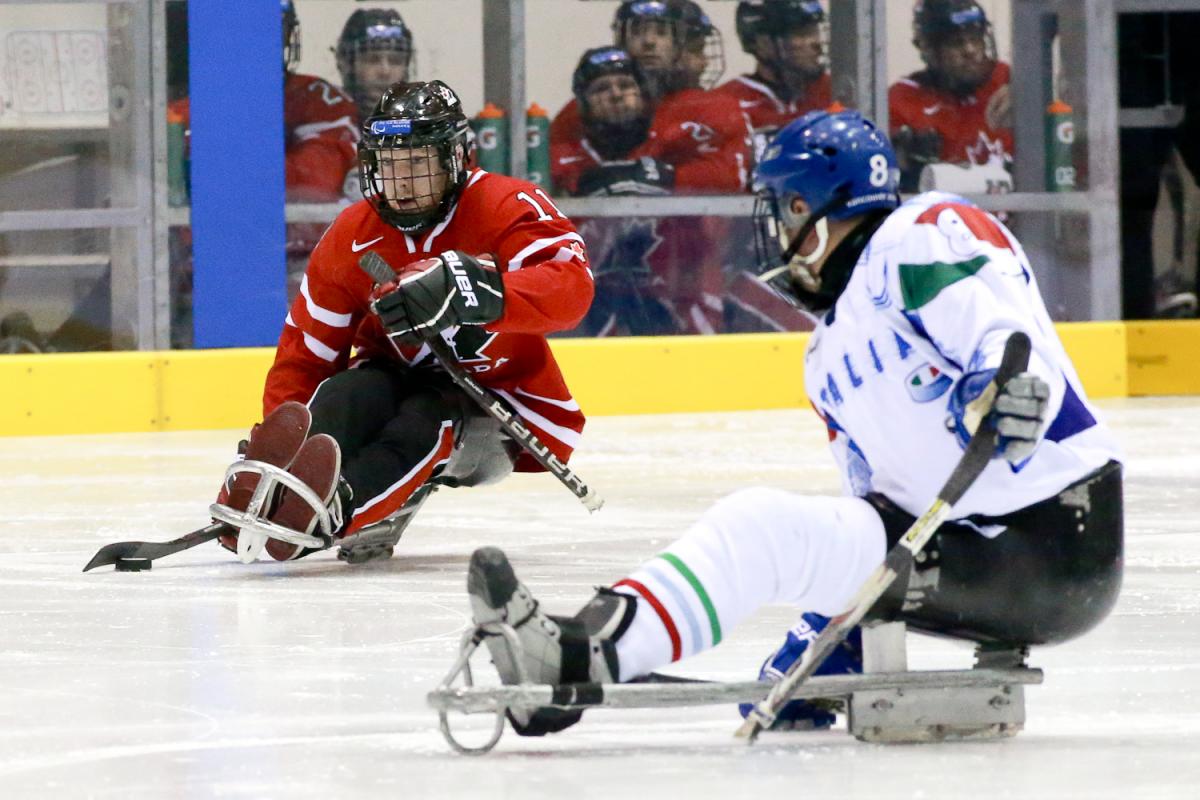 Adam Dixon enters the Sochi 2014 Paralympic Winter Games as the leading defenceman on the world's No. 1 team.

“It was big for me being sick and not being able to play hockey, and I remember saying to my mom, ‘I wish I had of just had cancer in my finger because then we could have just cut my cancer off and I would have been able to play hockey again in a week or two.’”

It is a common cliche that defence wins championships. That you cannot have a good offence without a good defence.

According to Canada’s ice sledge hockey captain at the Sochi 2014 Paralympic Winter Games, Greg Westlake, their quest for gold at the tournament would not go far without defenceman Adam Dixon.

“We know that he is the best player on our team,” Westlake said. “He’s more valuable than I am on the team. If I get injured, Brad (Bowden) can score goals, Billy (Bridges) can score goals. If Dixon gets injured, we have a tough time breaking the puck out of our own zone.”

Dixon, 24, officially joined the Canadian national sledge hockey team for the 2006-07 season and has been a great source of leadership at the point ever since.

Dixon was diagnosed with bone cancer in his right leg when he was 10 years old. Despite his young age, he was involved in high-level hockey and the transition to just automatically stop playing the game that he loved was a difficult one.

“It was big for me being sick and not being able to play hockey, and I remember saying to my mom, ‘I wish I had of just had cancer in my finger because then we could have just cut my cancer off and I would have been able to play hockey again in a week or two,’” Dixon said.

Once recovered, Dixon tried his hand at playing goalie in stand-up hockey but realised that it was not going to work out. A family friend had suggested sledge hockey while he was still recovering from cancer, and at age 11, he made the switch to the sledge.

At a young age, it is easier to learn things from scratch, which made Dixon’s transition a little easier to the new sport. But, as the assistant captain from Barrie, Ontario found out, skating backwards in a sledge is a lot different than able-bodied hockey.

“I remember talking to my dad in the car and saying how should I play this, how do you do that when you can’t skate backwards and I think that was something I had to get used to,” Dixon said.

In only his second season with the national team, Dixon and Canada won a world title at the 2008 IPC Ice Sledge Hockey World Championships A-Pool in Marlborough, Massachusetts in the USA.

Since then, it has been an uphill battle for Canada to get back to the top of the world with their most recent win at the World Championship stage coming last year in Goyang, South Korea.

“We had a couple disappointing World Championship tournaments and stuff, and then finally winning again last year in 2013, it was just nice to know that this is a very rare thing to do, to win a World Championship, and it was very tough, and I was able to really soak it all in,” Dixon said.

In Sochi, Dixon will be competing in his second Paralympic Winter Games and after a fourth place at Vancouver 2010 will be looking to find the podium for the first time.

He has often been in talks as a top defenceman in the world along with Taylor Chace (USA), Gianluigi Rosa (Italy), Niklas Ingvarsson (Sweden) and Rolf Pedersen (Norway).

Even with all the talk, Dixon, who has drawn comparisons to Canadian Olympic gold medallist Drew Doughty, will be entering Russia by letting his play do the talking.

“I just try to do what I’m supposed to do to make our team successful and if that puts me in that spot where I’m in that (top defenceman) conversation, then that’s great,” Dixon said.