Russia have gone from not having an ice sledge hockey programme just a few years ago to being on the world’s biggest stage in their own country. 31 Jul 2013
Imagen 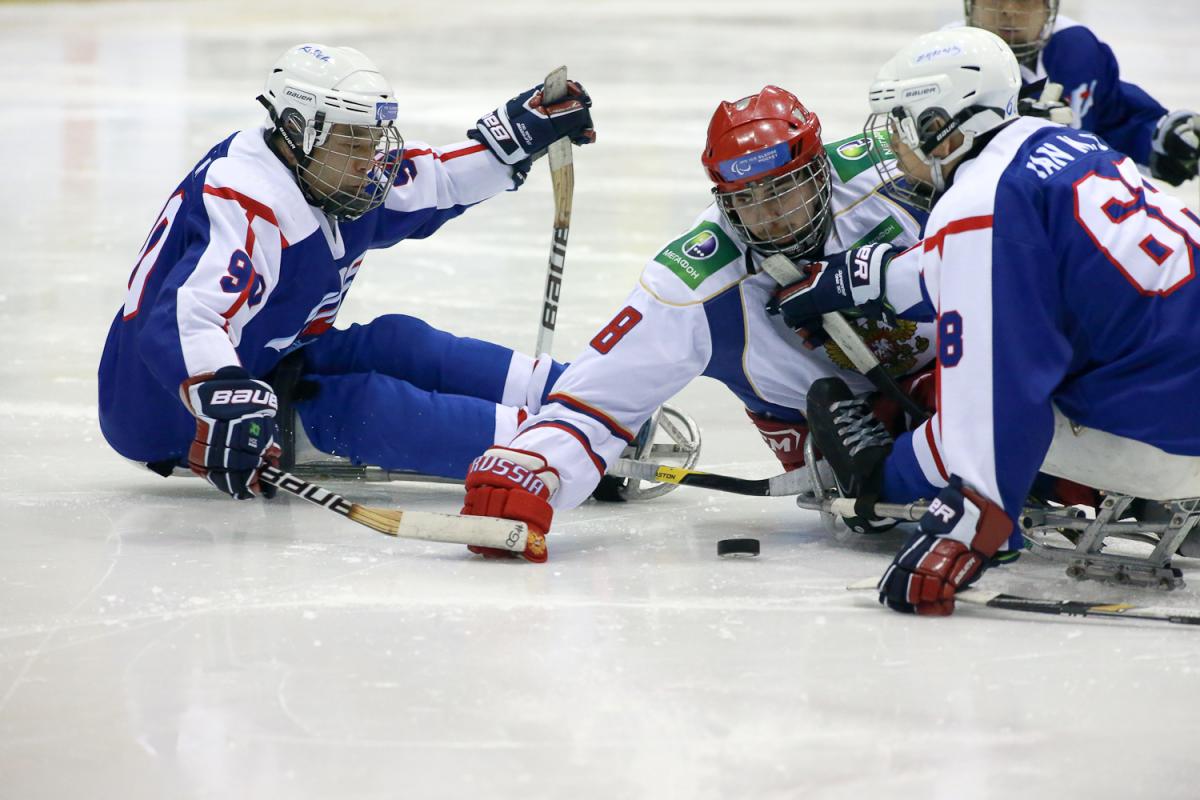 “I think of the things that I do well and things that I must improve on. Overtaking Greg Westlake and making him give up the title of the best forward in the world is one of them.”

Three years ago, Russia’s ice sledge hockey players were perched forward on their couches, taking mental notes as they watched the gold-medal game between the USA and Japan at the Vancouver 2010 Paralympics.

Taking a break from their training camp, the Russians, 11 hours ahead of Vancouver, couldn’t sleep.

The anxiousness of waiting four years to compete in their home country was too much to handle, and watching their competition was the only option.

“We realised that the next four years would be very difficult for us and that our skill would only let us dream of a gold medal in Sochi at that time,” said Dmitry Lisov, who was 19 at the time, one year removed from starting to play the sport.

Lisov, now 22, is one of Russia’s biggest scoring threats up front and showed the competition why at the 2013 IPC Ice Sledge Hockey World Championships A-Pool last season.

Lisov guided his team to a bronze-medal finish at the event, and more importantly, showed the ice sledge hockey community that Russia is no joke.

Russia have never hosted an Olympic or Paralympic Winter games before, but that doesn’t mean that they aren’t ready to host them in 2014.

“In 1980, our country amazed the whole world by holding one of the best Summer Olympic Games in the history, and I hope that the Winter Olympics and Paralympic Games in Russia will also be unforgettable and tremendous,” said Lisov.

With all the hype and the entire world watching, that kind of pressure does not go unnoticed on an athlete such as Lisov.

“Of course we are nervous because the Paralympic Games will be held in Russia for the first time, and we are sure that there will be no free places in the stands.

“All the spectators will expect us to win, and it presses us a little, but coming out on the ice, we’ll forget everything. Each of us has only one thought, one target, to win,” said Lisov.

In order to win, however, the Russians will face stiff competition in the likes of Canada and the USA. Canada are the defending world champions, defeating the USA, 1-0, in the championship game in Goyang, South Korea this past April. While Lisov scored twice against Canada in the group stage of the tournament, he admitted his team still has work to do in order to continue to improve.

Even with Lisov’s offensive touch, he doesn’t feel as though he is doing it by himself.

“During the World Championships A-Pool, each of our players did his part so well that I had to just put my stick under the puck,” said Lisov.

“We have many good players that are capable of turning the scale of the game, especially looking ahead to the Paralympic Games.”

According to Lisov, teams like the Canada and the USA – the powerhouses – will have to start looking in their rearview mirrors.

“There used to only be two leaders, being competitors only to each other, but suddenly our team came full of desire to demonstrate our strength,” Lisov said.

Although very humble of his personal abilities, Lisov is always looking for ways to improve his own game and aspires to be the best in his trade.

“A gold medal in Sochi would be the best reward, but before falling asleep every evening, I think of the things that I do well and things that I must improve on,” said Lisov.

“Overtaking Greg Westlake and making him give up the title of the best forward in the world is one of them.”