Heading into the World Championships, the Italians hope to keep their A Pool spot for 2013. 04 Mar 2012
Imagen 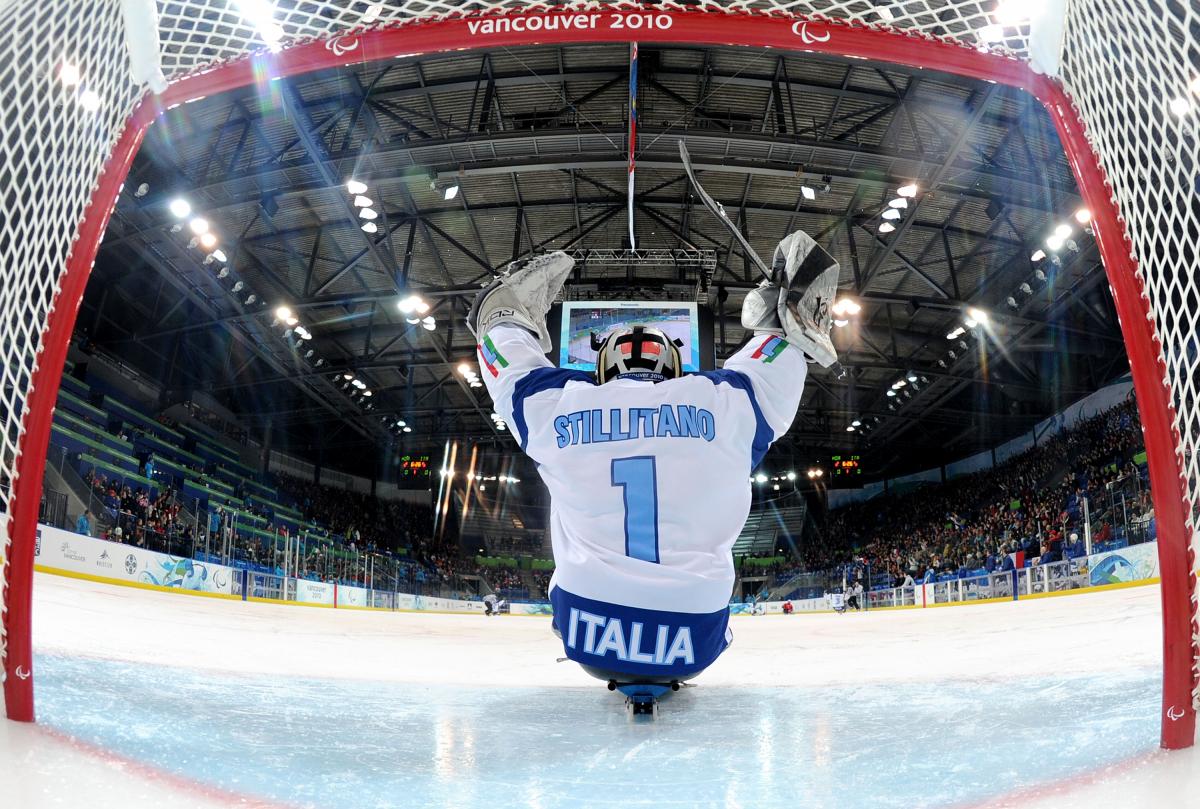 Santino Stillitano has been Italy's star goalie in its rise on the Ice Sledge Hockey scene in the last decade.

“At the start, we had some players come from other sports but know the right mentality of playing a sport. So we had a nice group, a nice atmosphere on the team.”

Italy’s Ice Sledge Hockey captain Andrea Chiarotti constantly inundates his teammates with the same phrase over and over again this season.

Keep your feet to the ground, he tells them.

After Italy’s surprise top finish at the 2011 International Paralympic Committee (IPC) European Championships, Chiarotti does not want his squad to get big heads as the 2012 IPC Ice Sledge Hockey World Championships approach at the end of March in Hamar, Norway.

The team has come a long way since its Paralympic debut at the Torino 2006 Winter Games, back during the days when it partnered with a veteran Norwegian team to better its programme.

“At the start, we had some players come from other sports but know the right mentality of playing a sport. So we had a nice group, a nice atmosphere on the team,” Chiarotti said.

“Maybe we lost 8-0, 10-0 or whatever, but the most important thing was to practice together and so that we had a big chance to learn from them.”

Italy was insistent on having an Ice Sledge Hockey team at the Torino 2006 Paralympic Winter Games after it saw how spectacular the sport was at the Salt Lake City 2002 Winter Games.

Three club teams were created in 2003, a national championship event was developed in 2004 and Italy participated in its first European Championships in 2005.

Greg Leperdy, Italy’s centre, said the minimal acceptable result in Hamar for him would be sixth place, ensuring the team could stay in the A Pool for the next season. The two teams that finish last at the World Championships will be delegated to the B Pool for 2013.

Italy’s team at the World Championships will be composed of several players who were impaired from motorcycle accidents, including multi-sport athlete Florian Planker.

The 35-year-old won a bronze medal in the Alpine Skiing Super-G event at the Salt Lake City 2002 Paralympic Winter Games and then chose Ice Sledge Hockey over Alpine Skiing by the time the Vancouver 2010 Games came along.

With Santino Stillitano starring in goal and Chiarotti and Leperdy joining Planker to make a trio of efficient scorers, the Italians will not be overlooked in their second World Championship appearance.

“Canada will be our first game and Norway the second,” Leperdy said. “The same as it happened at Vancouver 2010. Let's see if we can change the results of Vancouver.”

Massimo Da Rin De Lorenzo recently coached Italy to a second-place finish at a regional tournament in Torino at the end of February, where it finished ahead of Sweden and Estonia but fell to the Czech Republic in the finals.

The squad will now play three exhibition matches against Germany and then have a three-day team camp before heading north to Hamar.

The tight-knit team has all the charisma for sport in the world, now it just needs to translate it to the ice.

“The most important thing for us is to fight to stay in the A Pool with the big teams,” Chiarotti reiterated.