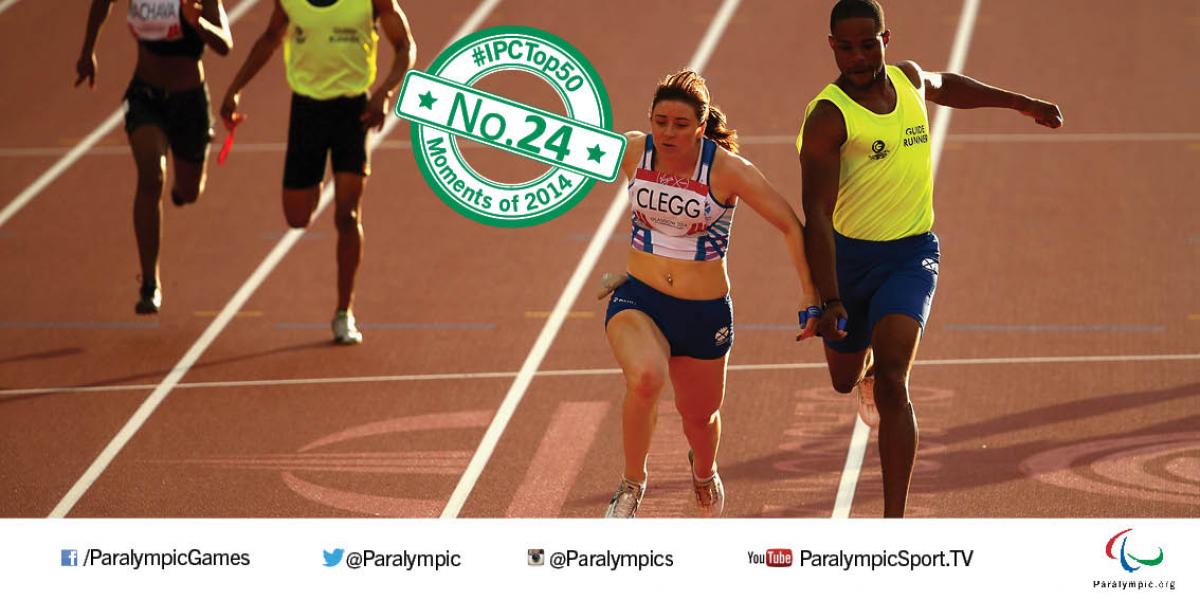 "Mikail is absolutely fantastic. I wouldn’t be able to do what I do without him. Without him I couldn’t do my job and without me he couldn’t do his job, so we definitely depend on each other."

In scenes reminiscent of London 2012, Scotland’s visually impaired sprinter Libby Clegg and guide Mikail Huggins made front page news in July when the pair won 100m T11/12 gold at the Glasgow 2014 Commonwealth Games, an achievement that makes No. 24 in the IPC Top 50 Moments of 2014.

Cheered on by a capacity crowd at Hampden Park, Clegg and Huggins clocked a season’s best 12.20 seconds to top the podium. Although the pair was strong favourites going into the race, Clegg admits she was nervous approaching the start line.

“We were expected to win but at the same time handling that pressure is completely different to a normal Championship. I was definitely being counted on to bring back gold so I was a bit nervous and was trying to make sure I didn’t mess up really.”

Following their gold medal win, Clegg and Huggins were in huge demand; the media were keen to speak to Scotland’s first Commonwealth Games track gold medallists for 20 years and the public were equally enthusiastic to show their support.

“I didn’t know what to expect as I’ve never won a gold at a such a big event before, other than World Championships. In London I came second and it was completely different. You are in much higher demand when you win a gold.

“Hopefully I’ve inspired quite a few people and highlighted para-sport a bit more. I enjoyed it but it was vey strange.

“Usually I like to keep a low profile, but it was really nice and lovely that people felt they could come up to me and show their appreciation for the performance,” said the 24-year-old.

Clegg admits competing in Glasgow felt a little more homely than London 2012 and was delighted at the recognition her guide Huggins got post-race.

“Mikail is absolutely fantastic. I wouldn’t be able to do what I do without him. Without him I couldn’t do my job and without me he couldn’t do his job, so we definitely depend on each other.

“Initially Mikail wasn’t going to be getting a medal because he’s English but our teamwork clearly impressed the guy in charge and they decided to give him a medal.

“It was fantastic that he got the recognition he deserves as he does put in a lot of work, just as much as me really.”

For Huggins, 2014 was certainly a year to remember. Not only was he an Englishman winning gold for Scotland at the Commonwealth Games, but he was captain of the Great Britain and Northern Ireland team at the 2014 IPC Athletics European Championships in Swansea.

Despite her Glasgow success, Clegg is unsure where it ranks in her overall career moments.