Terezinha Guilhermina, Jerusa Geber Santos and Jhulia Santos made a clean sweep of the 100m T11 final at London 2012, which comes in as the No. 25 moment of the year. 07 Dec 2012
Imagen 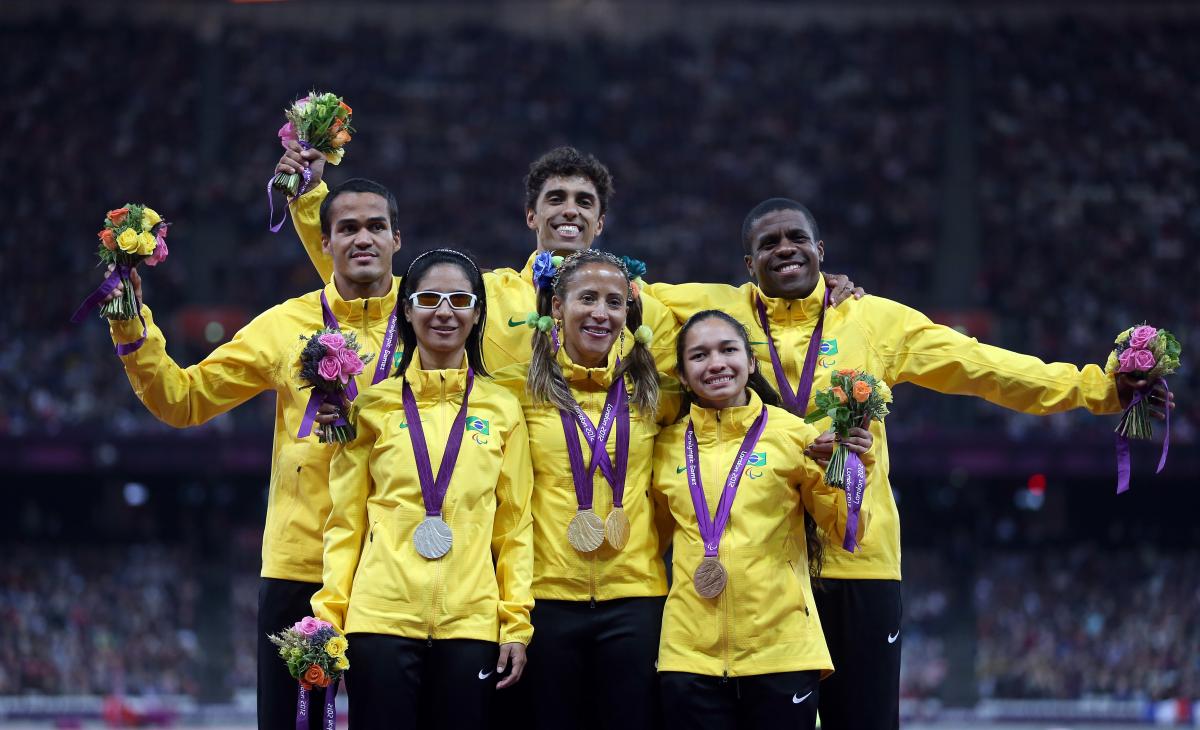 Brazil could not have asked for a better race at the London 2012 Paralympic Games than the women’s 100m T11 final.

Teammates Jerusa Geber Santos and Jhulia Santos sped past the line right behind her in 12.75 and 12.76 seconds, respectively, to take silver and bronze, completing a Brazilian sweep of the podium in the event.

“The 100m final was the most special moment,” Guilhermina said.

“I was physically exhausted and had run the 400m race the night before. When Guilherme told me that I had broken the world record, it was amazing.”

For the 34-year-old sprinter, it was her third gold medal in three Paralympic Games, and London proved to be her most successful Games yet.

“I felt like an artist who sees the masterpiece of this life completed,” said Guilhermina, who also won gold in the 200m T11 sprint.

“It was indeed my greatest accomplishment. The gold medal at the 100m has given me the feeling that it was worthy to have gone to London. Concerning that Guilherme had fallen near the end of the 400m final, the victory in the 100m final gave us a special feeling.”

The Olympic Stadium’s capacity crowd of 80,000 went wild for the Brazilians when they stood atop the podium together with their guides, as Guilhermina and Soares de Santana did an impromptu salsa upon accepting their gold medals.

The six Brazilians on the podium belted out their national anthem with the utmost pride, giving Paralympic fans a taste of the zeal Rio 2016 could hold.

“It was the first podium that was 100 per cent Brazilian,” Guilhermina said. “The most amazing thing was the feeling that this could happen and that surely will in the future Brazilian competitions in my category.

“The response was incredible. I can even say that it was much more than I had in my entire career. People recognised me everywhere and gave their compliments.”

Guilhermina’s eccentric eye mask, along with her vibrant tattoos, made the ceremony feel almost party-like.

“Although I couldn’t see the colours, I wanted the world to see me coloured,” Guilhermina said. “It was my way to show the world that a impaired person can be happy and complete, and that people don´t need to feel sorry for us.”

Guilhermina is now aspiring to be one of the host nation’s stars at the Rio 2016 Games – which she insists will be her final Paralympics – and that in the next four years she wants to win the Laureus Award for the world’s best athlete with a disability.

But until then, London 2012 will hold a special place in her heart.

“London was the most special competition of my life,” Guilhermina said.

“The fans were part of a dream that came true to me. I have to thank so much everyone who participated in any way: watching, cheering and feeling with me all the emotions that I experienced during the Paralympic Games.”