When Egypt’s Fatma Omar won the -56kg powerlifting competition in London, she stole the hearts of the crowd and earned herself spot No. 35 in the top 50 moments of 2012. 27 Nov 2012
Imagen “I am so happy and thrilled to win the gold medal. I came here to win and make Egyptians proud.”

Egypt’s Fatma Omar captivated audiences when she lifted more than two-and-a-half times her own body weight to win her fourth consecutive Paralympic gold and smash her own world record.

The crowds at ExCeL were completely absorbed by the battle between two giants of the sport – Omar and Nigeria’s Lucy Ejike.

In a breathtaking opening event Omar produced a successful attempt of 132kg in the -56kg category.

Before each lift, she would look up and shout Ya Rab (oh God).

Omar said she was blessed by God’s support.

“I also owe my coaches, who have been very supportive,” she said. “They had faith in me and I am glad that I have met their expectations.”

Her first lift was soon trumped by Ejike, who managed 135kg. Omar kept on top, though, by lifting 137kg.

Then, Ejike attempted what would have been a world and Paralympic record in the second round with a lift of 142kg, but the lift was judged unsuccessful.

Omar was, however, successful with 142kg, beating her own previous world and Paralympic record by a kilogram in her third lift – a mark she set four years previously at Beijing 2008.

The 39-year-old watched on as Ejike was forced to up the weight to 142.5kg in order to try to win the gold medal, but once again she failed to complete the lift.

She finished with a best lift of 135kg.

Omar celebrated her victory by breaking the world record for the second time that day with a successful fourth attempt of 143kg.

“I am so happy and thrilled to win the gold medal. I came here to win and make Egyptians proud,” she said. “It was a great competition and Lucy Ejike was a strong competitor.

“I have been training and preparing for London 2012 for a whole year, as I was pregnant before.”

Omar is married to Abdel Naby Mahmoud Saed, an Egyptian weightlifter, and they have two young daughters.

“This is my fourth participation in the Paralympics and I will keep training until the next one in Rio 2016,” she said.

Omar also expressed the hope of seeing more women take up powerlifting in the future.

“Egyptian women are known to be physically strong and there is growing interest in challenging sports,” she said. 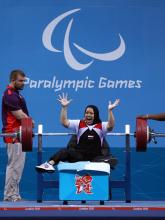