With two more world titles in Moscow, Russia, Great British para-canoeist Jeannette Chippington has taken her tally to eight and now has her sights set on Rio 2016. 13 Nov 2014
Imagen 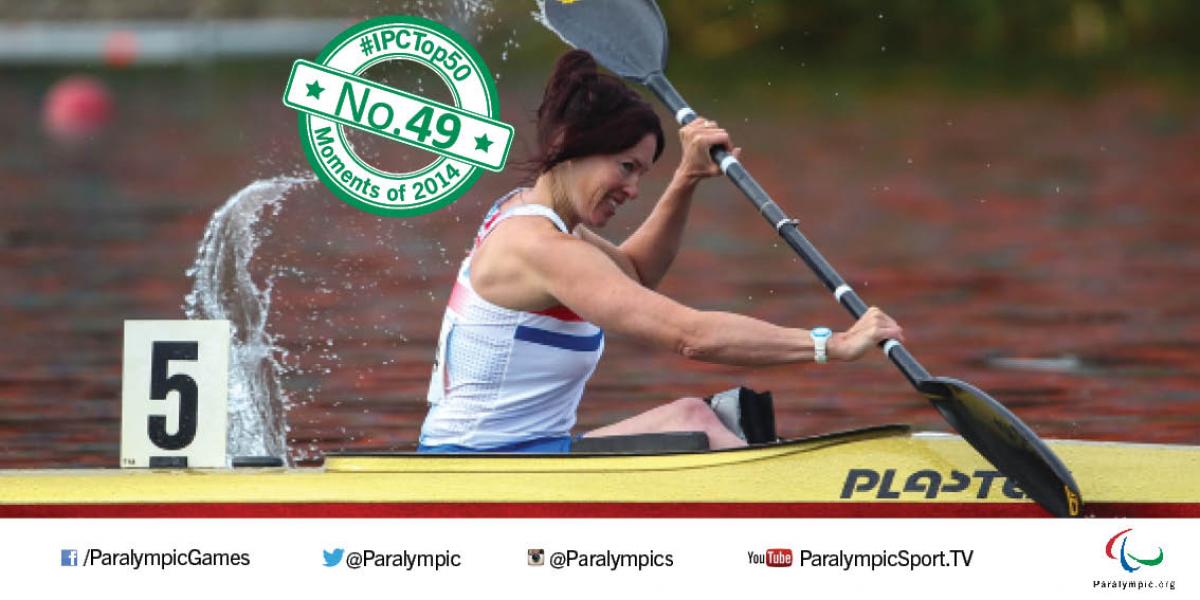 “I put myself under a lot of pressure as this is going to be one of the Paralympic events for Rio so I knew I had to perform.”

The No. 49 Moment of 2014 was when Great Britain’s Jeannette Chippington stormed to victory once again to take her eighth world title, with two more gold medals at the 2014 International Canoe Federation (ICF) Canoe Sprint World Championships in Moscow, Russia, in August.

Despite only taking up para-canoe in 2011, the Brit had a fantastic year in 2014, winning two European titles in Brandenburg, Germany, before her exploits in Moscow.

Her first success in Moscow came in the women’s K1 (A) 200m, beating Ukraine’s Svitlana Kupriianova and Russia’s Alexandra Dupik by over four seconds in 55.21.

Her second gold and eighth world title followed in the women’s V1 (A) 200m, with a huge six-second victory ahead of Australia’s Kara Kennedy and Ukraine’s Zoia Ovsii.

“Sometimes I have to pinch myself that I am eight-time world paracanoe champion, and being relatively new to the sport (three years) I still feel I have got a lot to learn,” said the 44-year-old.

No room for error

Reflecting on the World Championships, Chippington stated that her most memorable race was the K1 (A) final.

“I put myself under a lot of pressure as this is going to be one of the Paralympic events for Rio so I knew I had to perform,” she said.

“Warming up before my race I could not help thinking how amazing it would be if I was to win a World Championship medal on the Olympic course [from the Moscow 1980 Olympic Games],” she said.

“My race was a straight final and therefore there was no room for error. When the start bucket went down I put my race plan into action. All the hard training paid off winning the gold, but what was extra special was to win knocking a second off my PB [personal best] that I set a month earlier at the Europeans in Brandenburg.”

Para-canoe will make its Paralympic debut at the Rio 2016 Paralympic Games in Brazil, and Chippington has set her sights on making history by winning the first Paralympic title in her sport.

“Maybe I could be the first ever Paralympic gold medallist in my event.”

The 44-year-old has only been involved in the sport for three years, having previously competed at five consecutive Paralympic Games as a swimmer – Seoul 1988, Barcelona 1992, Atlanta 1996, Sydney 2000 and Athens 2004 – winning a total of 12 Paralympic medals, including two golds.

Following her retirement from the pool, her passion for water sports remained and she was quickly back on the water.

“I retired from competitive swimming and was looking for another sport to take up for a hobby,” she said.

“I was introduced to kayaking [para-canoe] by a friend and fell in love with it immediately. It was only ever meant to be a hobby but after 20 years of competition and training it must have still been in my blood.”

Her first world titles came in Poznan, Poland, in 2012, where she claimed three gold medals, before repeating this success Duisberg, Germany, a year later.

Now with eight world and three European titles to her name, she is certainly the one to beat heading towards para-canoe’s debut at Rio 2016.