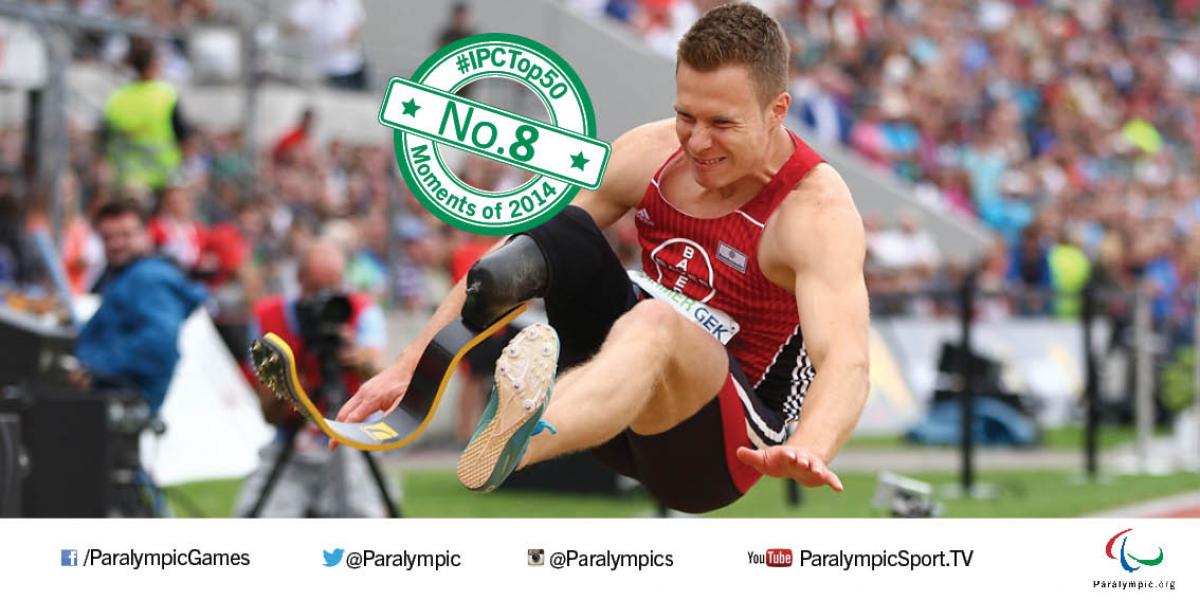 When the 8.24m came up on the score board, I was really surprised and so was my coach. It was more than we had hoped for.

Rehm competed against the top able-bodied German long jumpers at the event in Ulm, Germany, in July.

When he originally qualified for the championships, there were some discussions on whether he should be allowed to take part and whether his jumps would count, but the German Athletics Federation gave the green light.

“When I found out, I was really happy and I was looking forward to being able to compete against the top athletes in Germany, it was such a great challenge,” Rehm said.

“It was a competition where I knew it would get really difficult and hard to prove myself. I knew not everyone would like it, but I was mainly looking forward to a thrilling competition and a great challenge.”

The distance of Rehm’s fourth jump at the competition proved to be a surprise, even to him and his coach.

“When I landed I realised I’d gone far, really far. My initial aim was to get past eight metres, 8.05m was the qualification for the EAA European Championships. I often proved I could get close," Rehm said.

“When the 8.24m came up on the score board, I was really surprised and so was my coach. It was more than we had hoped for.

“I was really happy and thought, ‘Wow, how did you do that?’ And then when I saw I was first the next thought was, ‘OK, now it’s going to kick off.’

“Many had said before, ‘It’s ok for him to take part, but if he wins things will get crazy.’

“And then I hoped that Christian (Reif) would jump further. He actually made the competition of his life, jumping six times over eight metres. But he didn’t catch me.”

Becoming the first able-bodied athletics champion with a prosthesis, Rehm made German headlines and his phone did not stop ringing.

“After the victory ceremony I went straight to the press conference and then I was directly picked up for the “Sportstudio” (a German sport TV show). I didn’t sleep that night and the next morning we flew to a training camp.

“I was still there when I found out that the German Athletics Federation decided not to nominate me for the Europeans.

“That day my phone did not stop ringing. I never imagined it would get that crazy."

Rehm had to make a tough decision about what his next step should be.

“But then it was important for me to determine what to do next," he said. "And I realised that I carried a certain responsibility and that’s why I decided not to go to court. I wanted to stay fair with the other athletes, as they were fair with me and that’s what I wanted to give back.

“I wanted to set an example for the Paralympic side, wanted to further support the development of para-sport and not take a decision that would not help the cause. And then it’s not about personal wishes, it’s about the sport and what’s important for the future of the sport.”

It has been a long and stressful year for Rehm, who went on to compete in the 2014 IPC Athletics European Championships, winning the long jump gold medal and a bronze medal in the 100m T44.

He has already started to think about the upcoming challenges, including the 2015 IPC Athletics World Championships in Doha, Qatar, from 22-31 October.

“We’ve got the World Championships coming up next year and I want to be a bit more consistent with my performance," said Rehm.

“I want to get past the eight metre mark again, and it would be brilliant to do that at the World Championships.

“I have enough time to prepare myself and I am motivated to get close to or beyond the 8.24m.

“I am often asked about my next goals. In long jump, this is usually the next half metre mark, which would be 8.50m. But I am not thinking about that too much yet. I first want to get close to 8.24m again.”

Despite competing with able-bodied athletes this year, Rehm still knows where his roots are.

“I am and will always be proud to be part of the Paralympic Family."