Canadian Paralympian Billy Bridges and Olympian Sami Jo Small took to the ice for a bit of fun just after their wedding on 1 July 2011.

Bridges brought along a number of his teammates from Canada’s Ice Sledge Hockey squad, and Small recruited a small group of fellow skaters from Canada’s women’s Olympic hockey team.

The pair – now happily married for more than eight months – still has friendly quarrels over the result that day.

“We even included a friend from Sami’s college years from Mexico who never skated before in his entire life,” Bridges countered, “so I think the game was rigged.”

That game alone is enough to illustrate their relationship, which has strong ties to the sport.

Their lives, and thus their relationship, rotate around the rink.

This month is no different.

Small is preparing to play in the Clarkson Cup – the Stanley Cup of women’s hockey – as Bridges now heads off to Hamar, Norway to compete in the 2012 International Paralympic Committee (IPC) Ice Sledge Hockey World Championships, which start 24 March.

Bridges and Small briefly met in 2006 through the charity “Right to Play,” but it was not until the 2007 Women’s World Ice Hockey Championships that they recall their official first meeting.

Canada’s Ice Sledge Hockey team came out between periods to demonstrate its sport, and the two then took time to get to know each other.

“I’d like to say that I wooed her, but I’m not quite the ladies man,” Bridges said.

He did not waste any time in teaching her Ice Sledge Hockey.

“It’s certainly hard, that’s for sure,” Small said. “The first year was tough because I couldn’t even really move around on the sled. It was difficult to say the least.

“When we first met, I would go out as a stand-up goalie. It was great for me. I could work on my movement, and it was extra ice time and everything. However, I feel like the shots that the guys were getting used to were very different. So they convinced me to go into a sled.”

Because Canada’s squad does not train together regularly, Bridges often persuades Small to guard the net when he practices with a couple of his teammates.

Small even purchased her own equipment so she would not be as fearful of the game.

“It’s not like I got to start with beginners,” Small said. “I was starting with the best sledge hockey players in the world. I have to remind myself that a lot. I’m definitely humbled when I play with these guys. If I stop the puck, I have a smile on my face so huge. But I always say that having a goalie in the net is better than a pile-on.

“Although, some days I don’t feel like I’m much better than a pile-on playing as a sled hockey goalie,” she chuckled.

There was one particular day when a breakaway shot by Bridges took Small by surprise and a coach standing by uploaded it to YouTube.

“I had to go on YouTube and un-tag myself, because I was so embarrassed that it was me in the net,” Small said. “I always

Not so far apart

Although Bridges will be halfway around the globe come the World Championships, he has no need to worry about being away, since Small will also be busy competing back home and completely understands the mentality of a team road trip.

“She definitely eliminates a lot of that stress,” Bridges said. “It definitely is the perfect scenario for myself.”

Sharing the same career makes things so much easier, and they are both each other’s biggest fans.

Bridges, who turns 28 next week, will be a veteran at the World Championships on a Canadian squad that has recruited a new coach and slew of fresh talent since the Vancouver 2010 Paralympic Winter Games.

Canada’s lone loss so far in the 2011-12 Ice Sledge Hockey season came in a shootout in the opener of a three-game exhibition series against USA on 23 February.

Bridges has come on strong in the new year, lighting up the stat sheet with three goals and four assists in the Japan Four Nations Tournament in Nagano and three goals and an assist in the series against USA.

He made his way to a local military base with Canada’s team last weekend to train with soldiers who were injured in Afghanistan, and this week he heads to Hamar.

Although his biggest fan will not be in attendance, he knows they will be with each other in spirit on the ice. 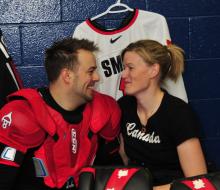 The couple have spent plenty of time together on the ice over the years, and hockey has become an integral part of their relationship.