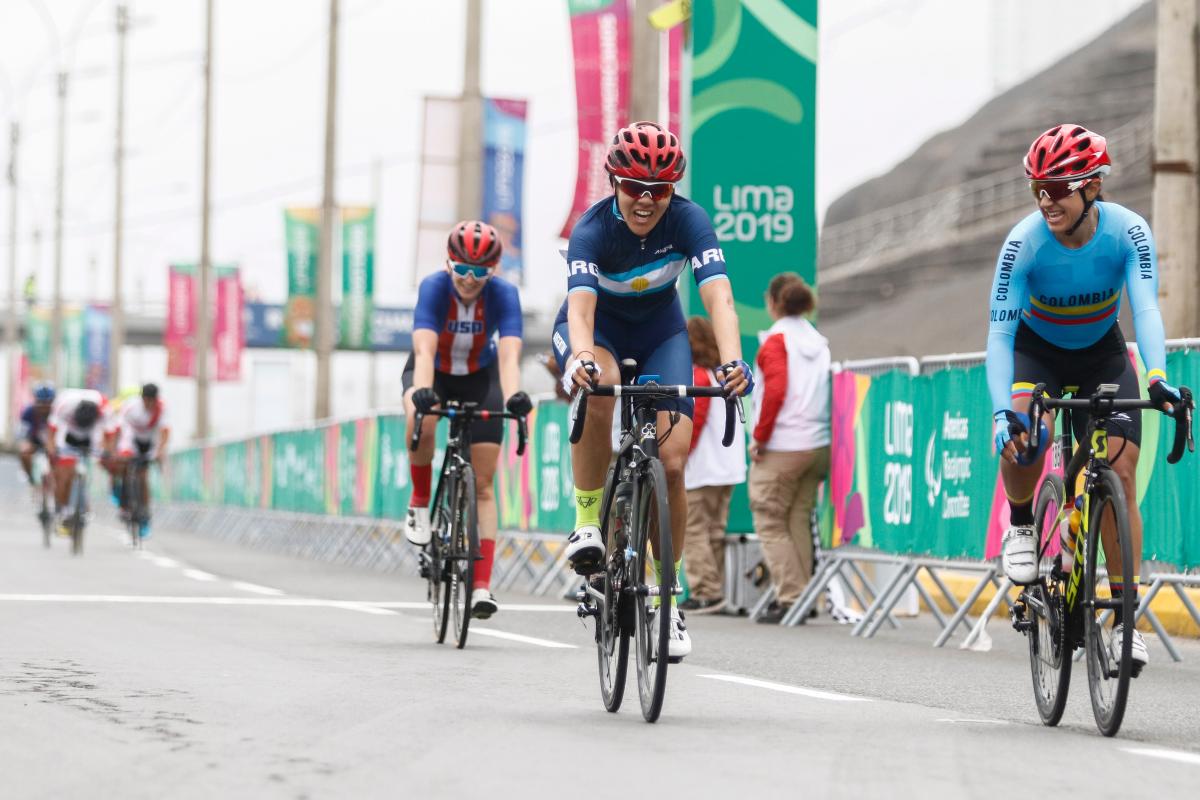 Mariela Delgado had spent a long time on a stationary bike that she felt awkward riding again on the road—and even with a pack.

But she also missed the feeling.

The Argentinian competed at her first international race in almost a year at May’s World Cup in Ostend, Belgium, where she won the women’s individual road race C5.

And it is a good feeling, as she targets her second Paralympic Games at Tokyo 2020.

“The truth is I am very happy and satisfied with the result, a great satisfaction for me and my country,” she said about her recent victory.

Delgado is one of the top – and few – Para cyclists from Latin America. She was one of four cyclists to represent her country at the Rio 2016 Games, where she competed in both road and track disciplines. She came close to a medal in the road race but fell short.

The result from her first Paralympics motivated her for the next. She went on to win the road race at the Lima 2019 Parapan American Games. On the track, she took silver in the time trial and bronze in the individual pursuit.

Though the COVID-19 pandemic has changed how she might experience her next Games, it has not changed her goals.

“I think the Tokyo Games will be very different, a different climate and a big challenge for us athletes to just be there,” Delgado said. “I think the pandeic has been difficult for everyone to continue with the preparation and sports goals.

“Honestly, my expectation is to have a better Games compared to Rio. There are many differences; it is not the same as facing the Games for the first time. I already have much more international sporting experience. As soon as Rio 2016 ended, I started to walk a different path.”

She had been living at the National High Performance Centre in Buenos Aires but had to leave due to the pandemic. Typically she would also train and compete in Spain. But not this time. So Delgado went to the Argentine northwest province of Catamarca to mimic the training environment she normally would have, and even returned to her home province of Misiones.

“I spent more than two months training on the trainer every day and doing competitions on a virtual platform so as not to lose that stimulus. It was strange to return to ride on asphalt and to see another landscape after more than two months,” she said.

“These were very difficult months of much adaptation in all aspects, overcoming several obstacles and the COVID itself when I had it. But it was also a great opportunity for other things and mainly a lot of learning.”

Delgado was born with a disorder in her right arm that limits her movements and strength. She was only 21 years old, studying in college, when someone invited her to participate in a cycling circuit.

Knowing the special opportunity she has to compete at a high level, Delgado does not take anything for granted.

“I always played sports. I could only practice them but not in a competitive way because my arm limited me,” Delgado said. “When I saw that I could train well and give the best of me without my arm limiting me, I got into cycling and I was enthusiastic about competing.”