Having lost only once in the last five years – last year in Stoke Mandeville – Tahti is the man most feared on the track. 01 Sep 2012
Imagen 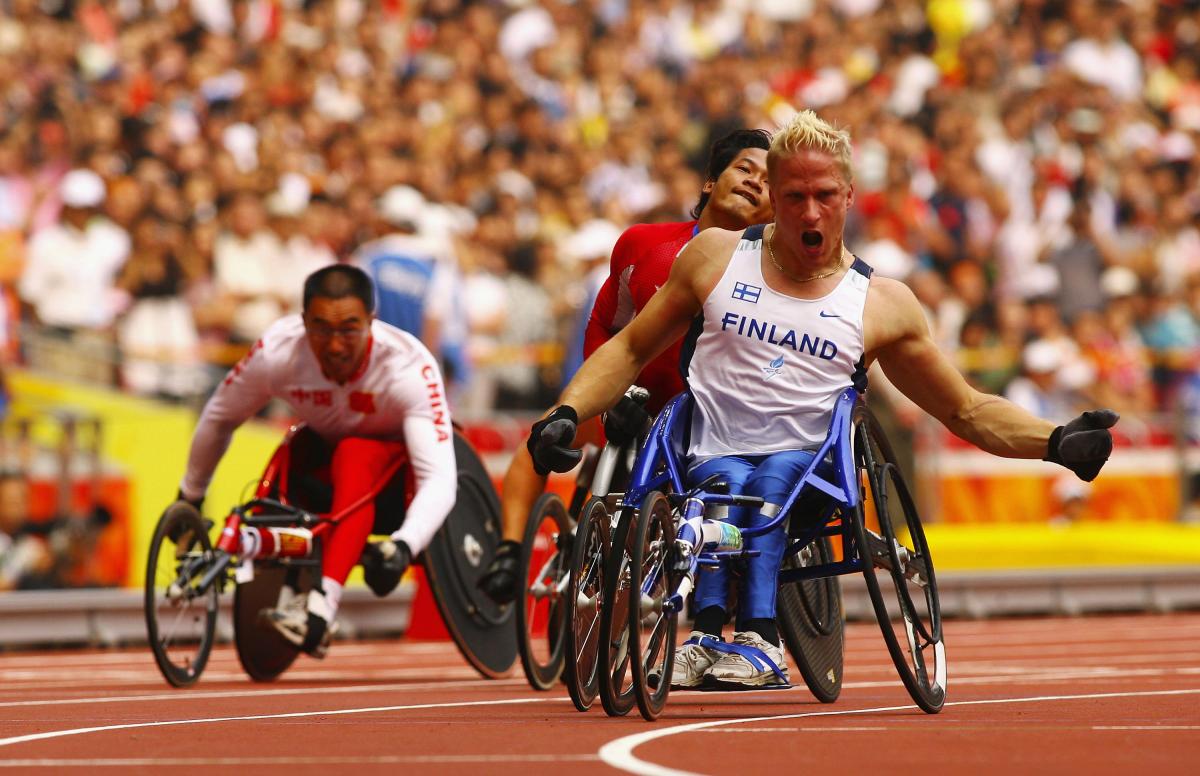 Double Paralympic champion Leo Pekka Tahti speaks quietly, but his intentions are loud and clear. Having clinched 100m T54 gold in Athens in 2004 then again in Beijing four years later, he is intent on reaching the top of the podium once again.

The Finnish athlete left a lasting impression in China, setting a new world record of 13.76 in the 100m T54, which, four years on, remains unbeaten.

But now he believes the London 2012 Paralympics Games could provide the perfect opportunity to lower that mark and propel him further into the history books.

“A world record could be possible; I hope the weather will be fine. If you want to make a world record time here there has to be good weather,” he explained.

And if previous form is anything to go by, the reigning world champion looks on track for another superb performance.

“I have won every competition I have raced in this year, and the European Championships was excellent for me,” he said. “I am in good shape and full of confidence. So I don’t feel too much pressure - I know I am in good shape, which is most important for now.”

Competition will certainly be tough in London, as Tahti’s rivals line up to try and beat the man who has eluded them for so long. But being the favourite does not worry the 29-year-old, who competes in the 100m T54 and 400m T54 events this time around. If anything, he thrives on it.

“It is good to be the favourite [in the 100m T54]. I enjoy that, it is a good situation for me, it was the same in Beijing, I was in good shape before that and I handled the pressure there well too. It is similar.”

Also at the starting line will be the Dutchman Kenny van Weeghal, who took silver behind Tahti at the IPC Athletics European Championships in the Netherlands earlier this summer, then turned the tables a day later to take gold in the T54 400m ahead of Tahti.

“Kenny is always very strong, you can never dismiss him,” Tahti said. “There are also some Chinese athletes and Mexicans too to beware of. But I think everybody wants to beat me and they know I am the world record holder. Normally I am very strong when I compete in world championships or Paralympic Games.”

Tahti first started wheelchair racing as a teenager, having grown up with a love of sport. His natural talent and aptitude as an athlete was quickly apparent, and by 2001 the Finn was selected to compete in his first international race.

“Before I started I heard some stories about wheelchair racing and when I was 15 I got the chance to test the sport. I got really good speed and thoroughly enjoyed it. Also the standard is high and it is one of the most competitive events, which is important for me.

“Of course you have to love training, and you have to have a special head so you can focus on training. As I got older I got a great coach too, the same coach for the last ten years. This is my occupation now, so I have a chance to do well.”

Now, as the clock ticks down towards his big moment on the track, Tahti, who also won 200m T54 bronze in Beijing and gold in Athens, believes the London crowds will only serve to spur him on.

“It was a big surprise when I heard London had sold so many tickets,” he said. “In Beijing the stadium was full almost every day and that was amazing. Now I think it could be the same here and that will be amazing.”

For all his quiet demeanour, Tahti is a powerhouse just waiting for his moment to shine again on the global stage. And with his competitive history, he has every reason to be confident. Having lost only once in the last five years – last year in Stoke Mandeville – he is the man most feared on the track. But he remains alert to his rivals. “It is an amazing stat, but that is all it is,” he added.

Statistics perhaps, but still a pretty persuasive argument that he will be one of the big favourites at these Games.