Throwing the distance at the World Champs

Two of the biggest rivals in athletics - Jeremy Campbell and Dan Greaves - face off in Lyon, with Campbell looking to take the discus F44 world title away from Greaves. 04 Jul 2013
Imagen 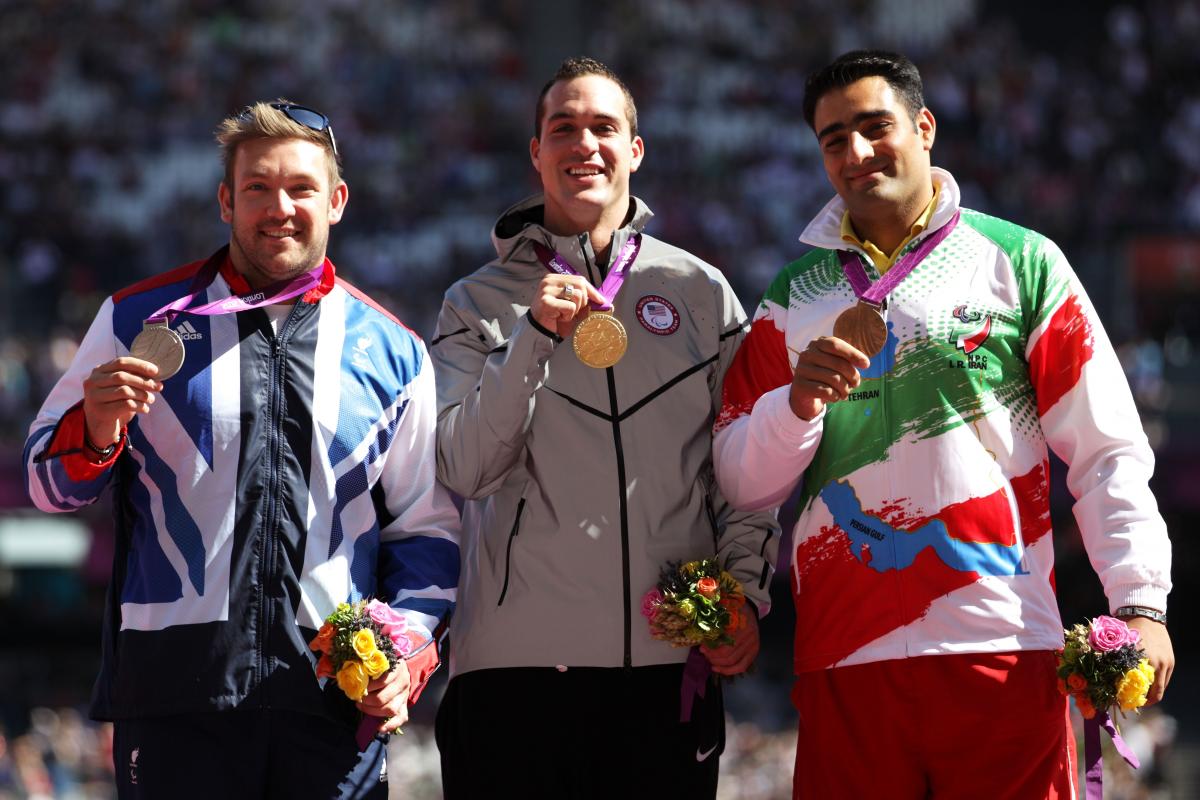 “I know there is a big throw there, but it is also quite good because I know that I don’t actually need it until it matters, and it matters at the World Championships - for me that is the most important thing. I want to be World Champion - that is what we compete for.”

For America’s Paralympic discus F44 champion, throwing a discus 60 metres seems to be the new norm.

About a year ago, the mark was considered an unbreakable barrier, until Jeremy Campbell threw 60.19m at the Triton Invitational last April.

The feat is no longer daunting for the 25-year-old, who holds the world record mark of 63.46m, which he threw last summer in Oklahoma, USA. Campbell went on to secure Paralympic gold with a best of 60.05m; now, he rarely expects less.

“I think this year I’ve only had one competition when I didn’t throw 60m plus, so I’ll just keep on focusing on the process in the ring and distance will take care of itself,” he said.

“That’s what I’m focusing on; that’s the most consistent I’ve ever been. When distances like that are becoming the average, then I know I’m ready for a breakthrough.”

Campbell, who won World silver in 2011, hopes that breakthrough will happen at the 2013 IPC Athletics World Championships this month, but he will have British rival Dan Greaves vying for the same goal.

For several years, the two have shared the podium, with Campbell claiming the last two Paralympic golds and Greaves owning three world titles.

“It’s a great rivalry, it’s great for the sport, and for me it’s motivation in the back of my head every day,” said Greaves. “We (Greaves’ support team) are focused on what we are doing, but obviously you have to keep an eye out for what other people are doing because we can’t afford any shocks or upsets, so we are thorough in our training and make sure we have done everything in our power to be number one.”

The reigning World Champion has thrown more than 60m in training but has yet to reach that mark in competitions – Greaves knows he most likely has to break 60m in Lyon to defend his title.

“We have got great self-belief in the training we do, and we know that our system works, and how to peak for Championships – there’s proof in the pudding of that,” said the 30-year-old, who was just shy of 60m at the Berlin Grand Prix last month.

And despite finishing behind Campbell in Birmingham, UK last weekend, registering 57.37m to Campbell’s season’s best of 62.05m at the IPC Athletics Grand Prix Final, Greaves believes he is on track for success in Lyon.

“I threw 62.50m in training last week so I am in 60m-shape and am constantly hitting it in training. It would have been nice to get a season’s best and get over 60m, but we have something to work on now,” he explained.

Indeed, having competed at major events since he was 18-years-old, the Briton doesn’t doubt his ability to peak when it matters. And while breaking a world record would be nice, he is focused on the top of the podium.

“First things first – records come and go, but it’s all about having a medal round your neck. Someone can come out and throw 65m, then go to the World Championships, and throw 58m and come fourth – you just don’t know; that’s the world of athletics.

“I know there is a big throw there, but it is also quite good because I know that I don’t actually need it until it matters, and it matters at the World Championships - for me that is the most important thing. I want to be World Champion - that is what we compete for.”

“The first time I worked with Jeremy, he went out to the World Cup competition in 2009, and Dan beat Jeremy by about 10 metres,” Judge said. “Greaves is very, very, very experienced, and he had Jeremy on the ropes in London for the first couple of rounds.”

But if Campbell has his way, he will finally be able to add the World title to his impressive list of achievements.

“At the 2011 Worlds, I wasn’t prepared; I wasn’t really training,” Campbell added. “Last year, I moved back to the Olympic Training Centre because after the 2008 Paralympics, I kind of lost my perspective, and my priorities shifted. Now I’m just different. I’m focused, I’m on track, and I’m hopefully going to get a World title.”

One thing is for certain – this is a rivalry not to be missed.

The 2013 IPC Athletics World Championships will take place in Lyon, France from 19-28 July. It will be the biggest gathering of international athletes since London 2012, featuring 1,300 athletes from 90 countries.