Vladykina Aiming to Use Berlin to Scare London 2012 Rivals

“I try to think about something else and usually end up asking my trainer to tell me some jokes to try relax me before competitions."

Russia’s Paralympic and World Champion swimmer Olesya Vladykina is hoping to show her rivals that she means business at London 2012 by putting on a dominant show at July’s International Paralympic Committee (IPC) Swimming European Championships in Berlin, Germany.

The 23-year-old from Moscow, who lost her left arm in a car accident in February 2008, is set to compete in three individual events in the German capital - the 50m Freestyle, 100m Breaststroke and the 200m Individual Medley – in one of the last major events before the London 2012 Paralympic Games.

And after following up her 2008 100m Breaststroke Paralympic Games gold by becoming World Champion in the same event last year, Vladykina is hoping for more success in Berlin.

Speaking to www.paralympic.org, the IPC’s website, Olesya Vladykina said: “Although my long term focus is London next year, I’m determined to show I’m top class in Berlin so that none of my rivals get their hopes up for the Paralympic Games.

“I want to show them they have no chance of winning in London and the best way to do that is to perform well in Berlin.

“The training is very serious and really tough at the moment in preparation for Berlin. Although I want to do my best there, I’m also hoping to establish a good foundation so that I’m on even better form for London 2012.”

One of the biggest challenges Vladykina could face in Berlin is nerves with the self confessed Michael Jackson fan admitting she struggles at major competitions.

“I try to think about something else and usually end up asking my trainer to tell me some jokes to try relax me before competitions.

“I also listen to music right up to the last minute. It’s usually something high tempo and inspiring.”

Vladykina is training seven hours each day in preparation for Berlin, splitting her time between the pool and the gym. Despite her rigorous training regime she is not prepared to say publicly how many gold medals she is targeting or whether her 100m Breaststroke World record of 1:17.60 set at the last European Championships in Reykjavik, Iceland in October 2009.

Olesya Vladykina said: “I don’t want to reveal how many golds I’m targeting in Berlin. All I’d say is that the individual medley is a very tactical race and the 100m Breaststroke is the most important race for me.

“I’m the World record holder in that event and I’m determined to show I’m world number one. Apart from that I don’t want to reveal too many secrets.

“I don’t even want to say whether I can break the World record or not in Berlin. I’m quite a superstitious person so prefer to keep things to myself.”

As well as gearing up for the Euros and next year’s Paralympic Games, Vladykina is also an ambassador for the Sochi 2014 Paralympic Winter Games, an event she believes can help change perceptions of people with a disability around the world.

As part of her ambassadorial role Vladykina had to learn to ice skate last year so that she could receive the Paralympic flag on behalf of Sochi 2014 at the Closing Ceremony of the Vancouver 2010 Paralympic Winter Games.

Olesya Vladykina said: “Sochi 2014 is a unique opportunity for Russia to show itself to the world. These are the first Paralympic Games ever in Russia and I hope that we can put on a great show.

“For the Vancouver handover I only had one month of training to learn how to ice skate. It was extremely difficult but I felt so inspired about what I had been asked to do that I never felt tired.

“Although I’m a swimmer I’d love to be part of the Russian team for Sochi. It would be great to take part in something like alpine skiing, but for now I’m 100% focused on the European Championships in Berlin and London 2012.” 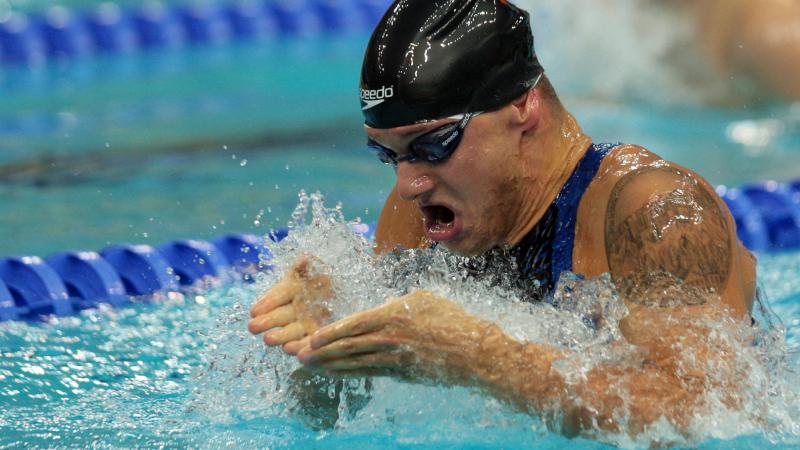 Swimming
Johnson and Henshaw Set for Battle of Berlin