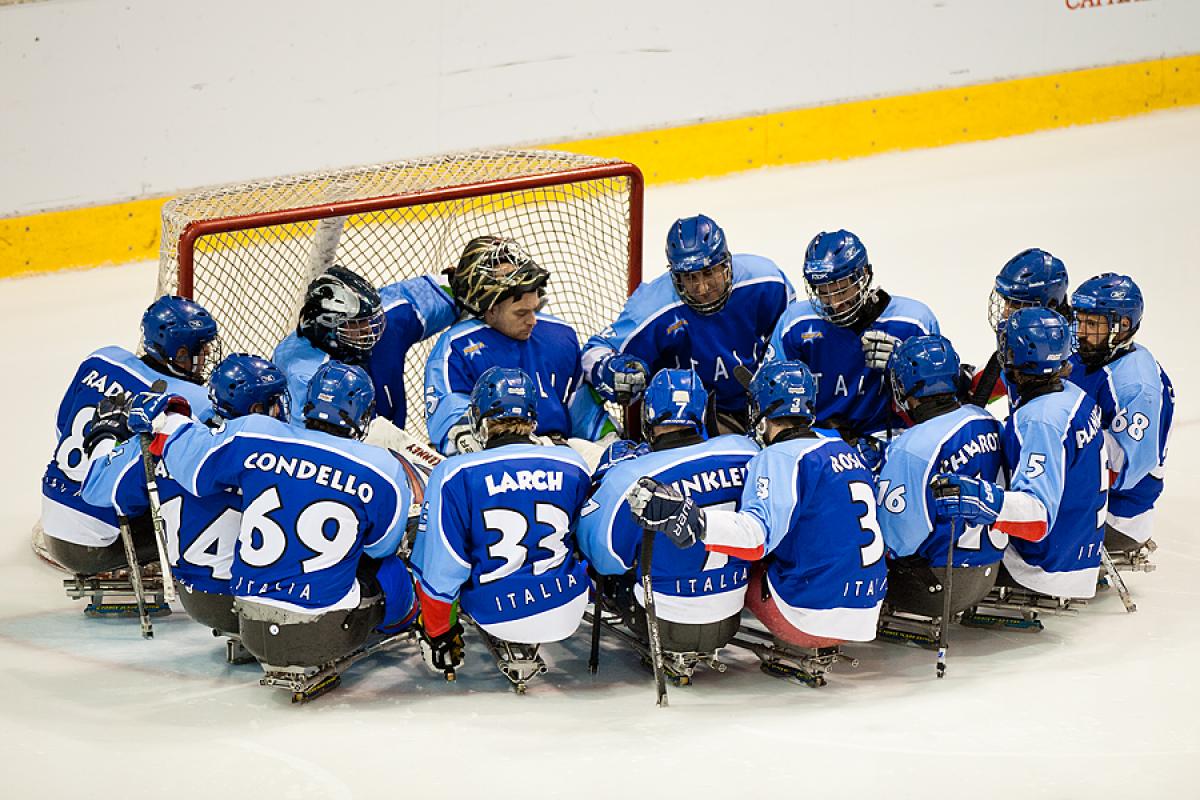 Italy qualified for the Sochi 2014 Paralympic Winter Games by finishing second at October's IPC Ice Sledge Hockey Qualification Tournament, which was held on their home ice in Torino.

Italy made their Paralympic debut in ice sledge hockey at the Torino 2006 Games as the host nation, finishing in last place. At Vancouver 2010, they jumped up a spot, finishing seventh.

With an Opening Ceremony flag bearer, a top defenceman and one of the world’s best goal scorers, one would think Italy’s ice sledge hockey team has a target on their back heading into the Sochi 2014 Paralympic Winter Games.

The three aforementioned players – Andrea Chiarotti, Gianluigi Rosa and Florian Planker – are all capable of having big games, but whether they can vault seventh-seeded Italy to the Paralympic podium for the first time in history in the sport remains in question.

Italy made their Paralympic debut in ice sledge hockey at the Torino 2006 Games as the host nation, finishing in last place. At Vancouver 2010, they jumped up a spot, finishing seventh.

But one could argue they’re heading into Sochi 2014 with some of their best performances to date.

The team just missed out on a chance to directly qualify for Sochi 2014 when they finished in sixth place at the 2013 IPC Ice Sledge Hockey World Championships A-Pool in Goyang, South Korea.

It came down to a penalty shoot-out against Norway in the fifth-place game, during which Italy could not find the net even once.

However, at October’s IPC Ice Sledge Hockey Qualification Tournament on their home ice in Torino – a place they are much more comfortable playing – they found the net early and often to finish second and qualify for Sochi.

Not to mention they remain the current European champions – a title they won at the last edition of the event in 2011.

Italy enter Sochi 2014 with a strong defensive line anchored by Gianluigi Rosa, whose right leg was amputated at the thigh after a motorcycle accident.

He spends more time in the penalty box than most other defencemen on the ice because of his quick speed and playmaking abilities, and because he’s so aggressive and willing to chase after the puck on the ice.

“Gigi used to play soccer and is unbelievable with his stick handling, and, as the captain of this team, I’m very proud of how he’s played,” said Chiarotti earlier this season.

In addition to Rosa, all eyes will be on the veteran forward trio of Planker, Chiarotti and Greg Leperdi – all of whom will need to show up big at the top of the ice to help get Italy into the semi-finals.

“It’s amazing to qualify for another Paralympics and to receive the publicity,” said three-time Paralympian Planker. “Will these be my last Paralympics? You’ll have to ask my wife.”