Athletics events come to a close 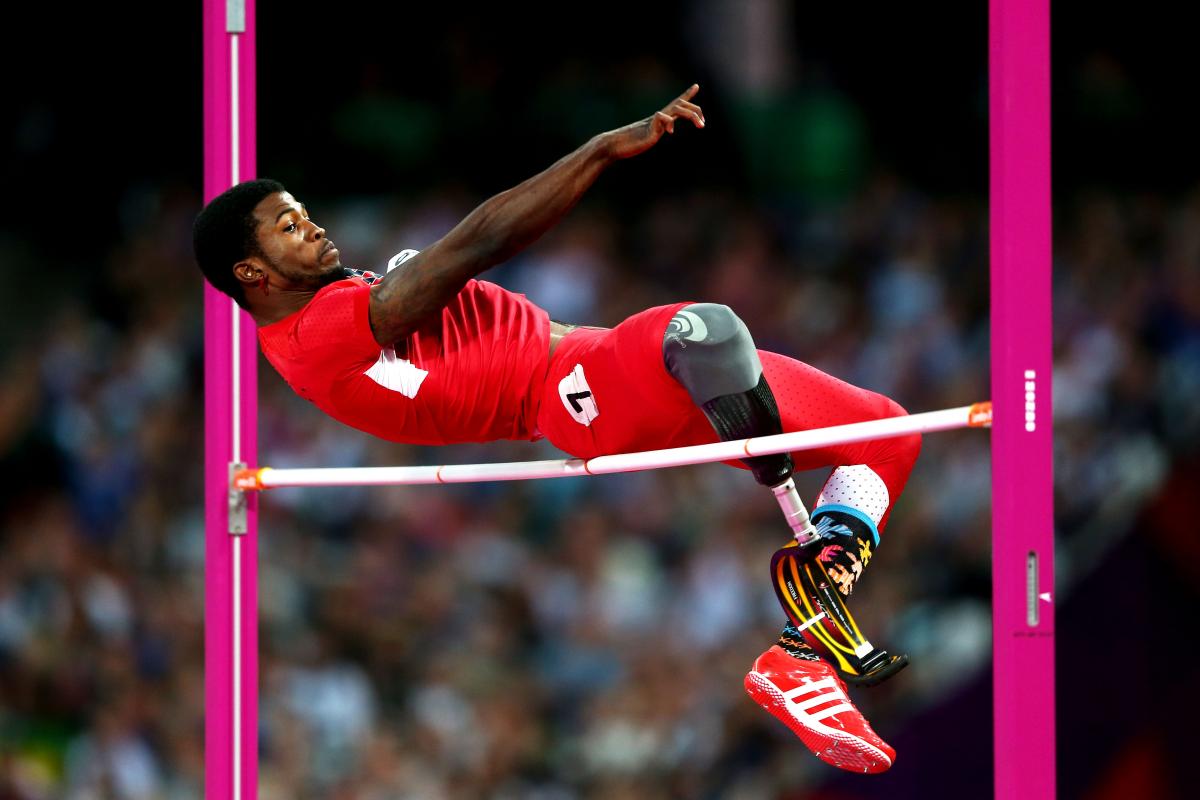 USA's Richard Browne competes in the high jump on the final day of the London 2012 athletics competition.

"I still can't believe it. I came here to make one medal, maybe, and now it's two - it's unbelievable, it's more than I ever dreamt of.”

South Africa’s defending champion Oscar Pistorius finally secured the individual Paralympic gold he had been waiting for, winning the 400m T44 final on Saturday (8 September), the final evening of competition at the Olympic Stadium.

The 25-year-old, who had been focussing on the one lap event ahead of the Games, looked in terrific form as he swept through the field down the back straight. Coming round the bend well clear of the field, his sprint to the line was a formality, as he crossed the line more than three seconds clear of his rivals, clocking a new Paralympic record of 46.68.

“It was very special to me. It was my last event of the season, the last event of the London 2012 Games,” Pistorius said. “It was the 11th time I was able to come out on the track and I just wanted to end by giving the crowd something they would appreciate and take home.”

USA’s Blake Leeper took silver in 50.14, with his teammate David Prince taking bronze in a T44 world-record time of 50.61.

China finished the evening with three gold medals. Liu Wenjun went one better than the silver she won in Beijing, setting a new world record in the 100m T54 as she crossed the line in 15.82.

“This morning I said I wanted to break the world record for this event, and now I've got it,” she said. “I did three events at these Paralympic Games, and in the first two I didn't perform very well. The last race was my strongest, so I tried my best and this is the most important one for me."

Xue Lei stormed out of the blocks in the 100m T11 to take gold ahead of 2008 champion Lucas Prado and London’s 200m T11 gold medallist Felipe Gomes.

Zhou Hongzhuan added China’s third individual gold of the night with victory in the women’s 400m T53, improving on the silver she won in Beijing with her second gold of London 2012.

It was also a convincing victory for China in the 4x400m relay T53/54, as the defending champions broke their own world record set in Beijing four years ago.

Liu Yang led out at the gun, with Liu Chengming racing the second leg. By the third lap Li Huzhao had a clear lead, which Zhang Lixin extended, to cross the line in 3:05.46.

Thailand took silver just ahead of Australia, who won bronze.

There was a dramatic finish to the men’s 100m T37, with Fanie van der Merwe and Liang Yongbin both diving for the line. A photo finish revealed the South African had clinched gold, although they were both given the same time – 11.51, a new world record.

Van der Merwe said: "Going over the line, I didn't actually know if I'd taken first place. But, seeing the replay, I was just overwhelmed with joy. He was straight and I was a bit lower, but I could see my chest going over first."

In the men’s high jump F46, the world champion Maciej Lepiato looked sensational as he maintained a clean sheet up until 2.12m, which he cleared on his second attempt. The clearance marked a new world record for the Pole, who was unable to clear higher, finishing on top of the podium ahead of 2008 gold medallist Jeff Skiba of USA.

American Raymond Martin continued his terrific run of form, picking up his fourth gold medal of the Games in the 200m T52.

“To compete in four events and to win all four gold medals is just incredible,” Martin said. "It's my first Games, so I had no idea what to expect, incredible. Everything has been beyond my dreams.”

"I still can't believe it. I came here to make one medal, maybe, and now it's two - it's unbelievable, it's more than I ever dreamt of,” Matzinger said.

Double world champion Elena Ivanova underlined her sprinting prowess as she added to her 200m title, with a win in the women’s 100m T36.

In the women’s shot put F40, Raoua Tlili bettered her own world record with her second attempt, throwing 9.86m, which was enough to take gold ahead of Meng Genjimisu of China, who threw a best of 9.13m.