London’s Olympic Stadium celebrated its first birthday tonight with two world- leading marks and a Bolt of Lightning. 28 Jul 2013 By Phil Minshull | For the IAAF

Held exactly 12 months since the London 2012 Olympic Games Opening Ceremony, and newly branded as the London Anniversary Games, the IAAF Diamond League meeting in London this year has been billed as a London 2012 encore, a come-and-see-it-all-again two-day extravaganza before the stadium shuts down for two years and is reconfigured. 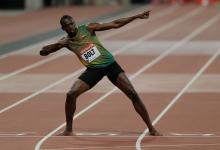