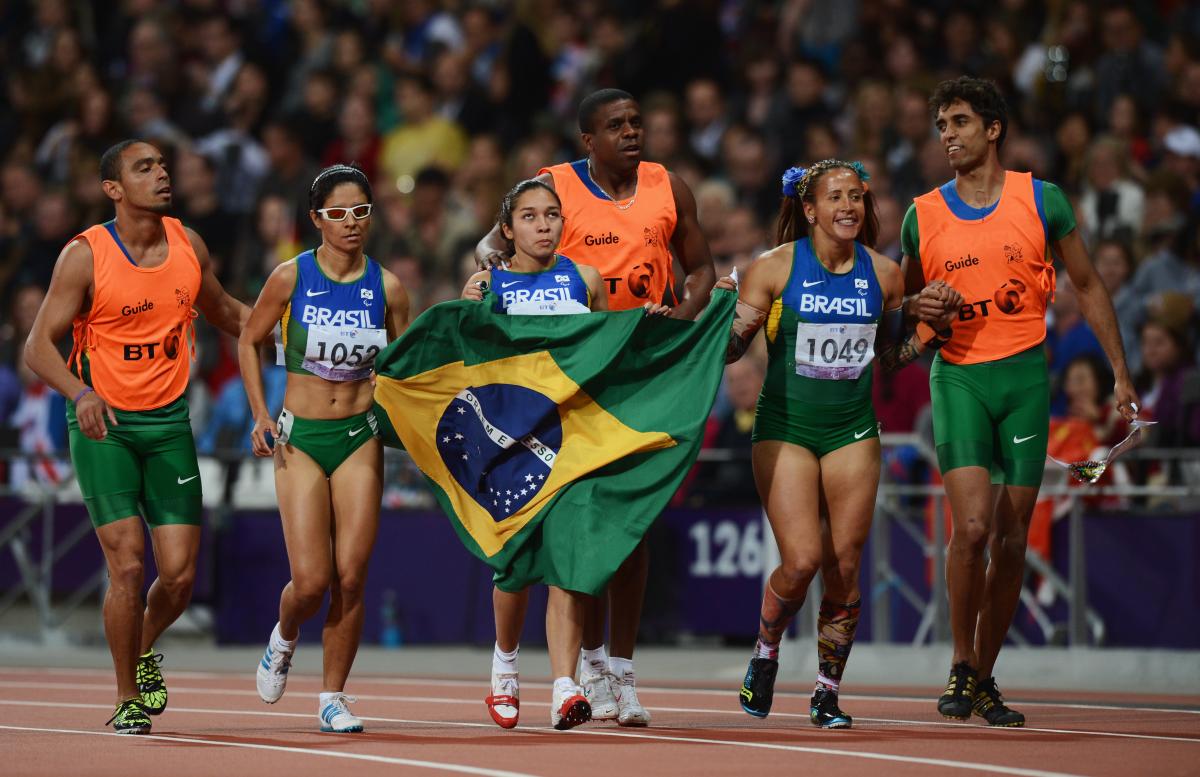 “It’s like a present, a miracle to get the gold medal. Today, I showed to the world how strong I am and how well I can do.”

It was a Brazilian one-two-three on the track at the Olympic Stadium on Wednesday (5 September) as the 2016 Paralympic Games host nation swooped all three medals in the women’s 100m T11, led by defending champion Terezinha Guilhermina.

The 33-year-old, who dominated the T11 sprints at the World Championships last year winning no fewer than four gold medals, broke her own world record as she crossed the line in 12.01, adding to the 200m T11 gold she won on Sunday.

“I did my best to win the gold medal,” she said. “It’s like a present, a miracle to get the gold medal. Today, I showed to the world how strong I am and how well I can do.”

European champion Martina Caironi also bettered her world-record mark, coming through strongly in the last 40m of the women’s 100m T42 to take gold in 15.87.

The evening had already got off to a flying start as Great Britain's Jonnie Peacock stormed through to win the first heat of the men’s 100m T44 in a time of 11.08, equalling the Paralympic record.

China took gold and silver in the women’s 800m T53, with Zhou Hongzhuan finishing strongly to retain the title she won in Beijing. The 23-year-old clocked a new Paralympic record 1:52.85 ahead of her compatriot Huang Lisha, with Jessica Galli claiming bronze.

There was gold and silver glory, too, for Poland, and a repeat of the medal lineup from the European Championships in June, as Barbara Niewiedzial and Arleta Meloch took first and second in the women’s 1,500m T20, with bronze for Ilona Biacsi.

There was a dramatic finish to the men’s 800m T13 as the defending champion and world record holder Abderrahim Zhiou closed down on Egor Sharov in the home straight, passing the Russian in the final 20m to secure an impressive victory, and his second gold of the Games, adding to his 5,000m T13 silver.

Zhiou, who won four gold medals at last year’s World Championships, did not look any the worse for his busy Games’ schedule as he drove hard to the line, clocking 1:56.42.

“I’m very happy with the gold and with my third medal. I won it after a hard effort. I am actually expecting four medals. I still have the marathon to go,” he said.

Australia’s world champion Richard Colman held on to the lead after coming off the bend strongly to take gold in the men’s 800m T53.

Johanna Benson stormed home in the closing stages of the women’s 200m T37 to add gold to the silver medal she won in the 100m T37, whilst Cuba's star, Yunidis Castillo, enjoyed a clear win in the 100m T46.

Marieke Vervoort maintained her lead to the line as she upset the formbook to win the 100m T52, with Canada’s world record holder and 2008 champion Michelle Stilwell chasing close behind for silver.

“I didn’t expect this,” said Vervoort. “Everybody told me that I had a very quick start and then I saw Michelle on my right coming back and I said ‘I’m not going to let that happen.’”

Tatyana McFadden added another Paralympic title to her collection as she dominated the 800m T54. The American led for most of the race, and crossed the line more than two seconds clear of silver medallist Edith Wolf.

There were two relays in the evening’s schedule, starting with the men’s 4x100m T11/13, which was won by Russia in a nail biting finish.

Then in the men’s 4x100m relay T42-46, the South African quartet of Samkelo Radebe, Zivan Smith, Arnu Fourie and anchor Oscar Pistorius, delivered a fantastic performance as they clinched gold in world-record time. China won silver ahead of Germany with bronze.

There was a new F12 world record too for Zhu Pengkai in the javelin F12/13. The Chinese athlete recorded 1,050 points (64.38m) to better the mark he set when he won Paralympic gold in Beijing.